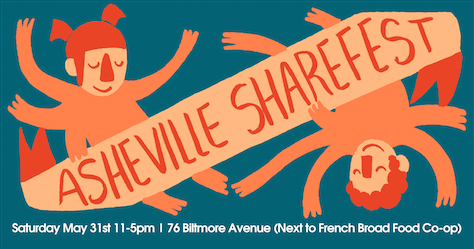 Asheville, NC has a very active sharing culture and has for quite some time. In a city of 80,000 it may have the most sharing initiatives and collaborative consumption resources per capita in the country. This was evidenced by the SHARE Asheville Community Map earlier this year and once again during the Asheville ShareFest.

With a wide range of activities, exhibits and performance there was something for everybody and many a passer by were drawn into the event as they walked downtown. This being a first time event the organizers opted for a very visible location in the parking lot of the local food co-op right in the center of town. The French Broad Food Co-op also hosts the Recyclery (a community bike kitchen) in the basement, a weekly farmers market and is directly across the street from Co-Luminate, a new co-working and community events space. Added together they make a very shareable block! 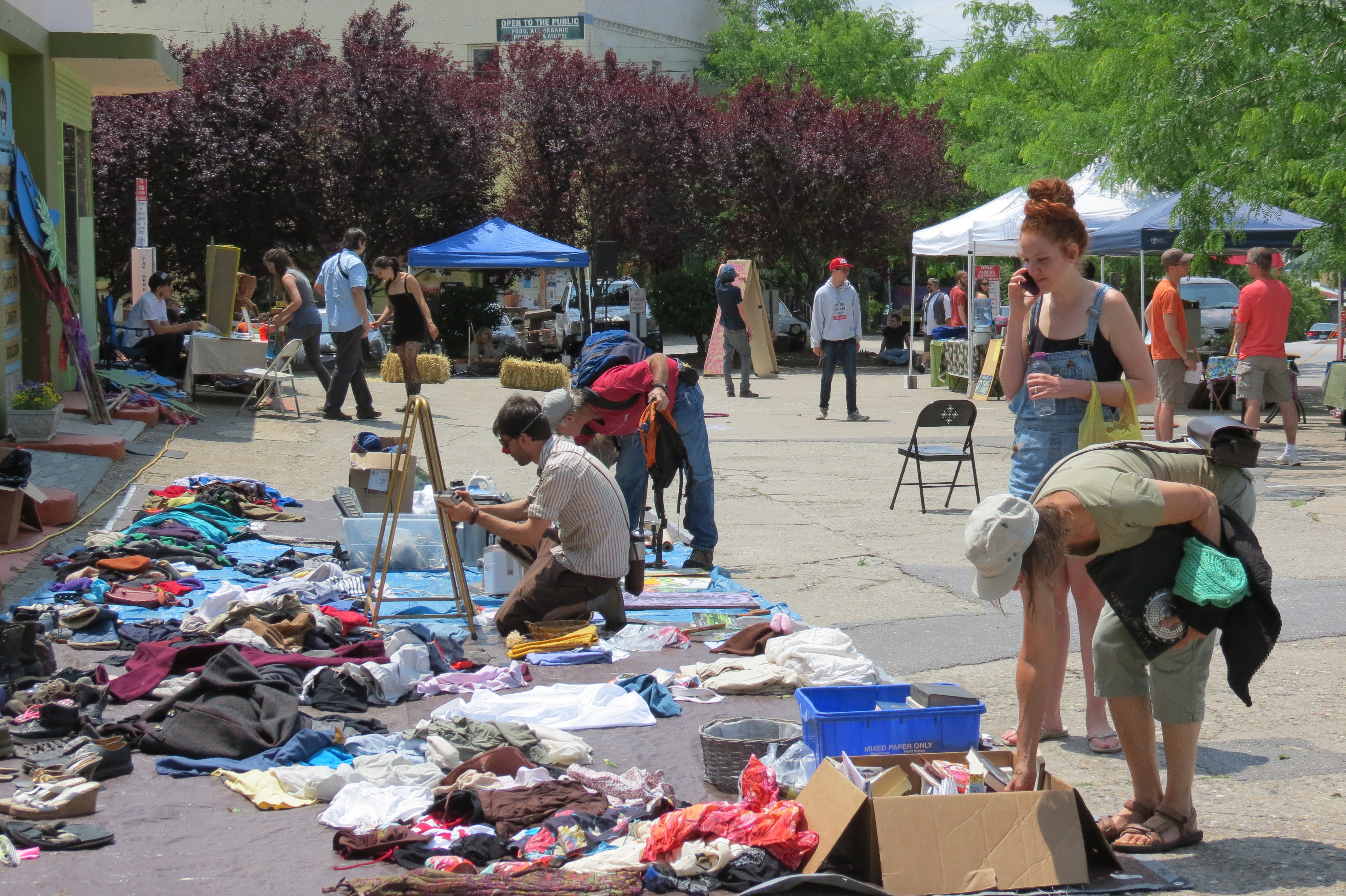 All that they Shared

The goal of the event was to showcase as many of the offerings on the SHARE Asheville Community Map while helping to revitalize existing sharing projects like the Really Really Free Market, Time Bank and Free School which have been put on pause until new leadership can support their next evolution. Organizing for the event began about 2 months before it happened with a series of open meetings for those interested in participating, outreach to local organizations, workshop leaders (for the skillshare), volunteers and for a (shared) location of course. The event got a great boost when SHARE Asheville, a new community initiative lead by organizers from the REAL Cooperative, secured the cover story in the Mountain Xpress (Asheville’s free weekly paper) entitled: Common Exchange: Mapping Asheville’s Shared Economy.

All in all on May 31st the event featured exhibits and activities lead by the Asheville Makers, Asheville Pay It Forward Network, Peace is Possible, Mountain Housing Opportunities, Duck Dance Farm, Asheville Tool Library, Wild Abundance, Recyclery, Blue Ridge Biofuels, Natureplay Preschool, sound system and performance from Paul Cataldo and more! There was a bustling REALLY REALLY FREE MARKET, Seed Swap, Performance Stage and Skill Share with 12 top notch workshop leaders facilitating discussions about a wide range of topics from Domestic Duck Keeping and DIY Solar to Abundance Visioning and Harnessing our Power as Cultural Change Agents with many more topics in between. There was even a last minute addition with a performance from the Emergency Circus who tour the country administering joy to children’s wards, senior centers, homeless shelters, prisons, and wherever else there is a “circus emergency.”

“Asheville has participated in the sharing economy for many years, from community gardens to cooperatively owned businesses, ‘free school’s’ to housing cooperatives and much more,” said Emma Hutchens co-founder of REAL Cooperative.  “We showcased a wide range of the local sharing economy projects, many of which were inspired by successful initiatives from around the country, while providing a window into what it would be like to live in a Sharing City.” 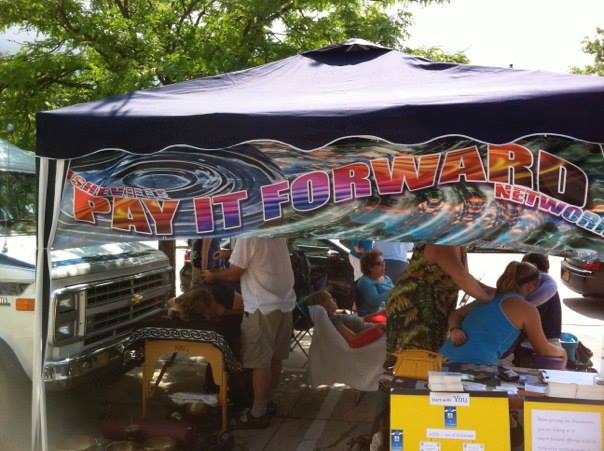 Lessons Learned and Next Steps

Although the event was primarily pulled together by 3 very dedicated individuals, on the day of, it was flooded with eager volunteers showing up 2 hrs early and sticking around well after it was over to clean up; all the while sharing the joy of creating the event. Many of the volunteers reported an interest in helping to coordinate another ShareFest in the fall.

The 6 hour ShareFest was successful at attracting nearly 500 people over the course of the afternoon but due to the nature of the location downtown many of the ‘passers by’ stuck around for less than 15 minutes as they continued on to where they were going in the first place. This didn’t stop most people from checking out the booths, getting a crash course on the sharing economy and picking up a few items from the free market. Many others came out specifically to participate in the event and stuck around for most of the day; filling volunteer shifts, attending workshops, meeting other community members and even getting up for a performance during the open mic.

A number people voiced interest in hosting a ShareFest in their neighborhood so, pending community support, events of this kind may become more frequent in Asheville. To keep the momentum going, organizers will be hosting a community event in early July to connect people together around shared interests to support new and existing projects and to continue the growth of a local sharing economy.