We Gathered, We Mapped, We Shared: a #MapJam Follow-Up - Shareable
Skip to content 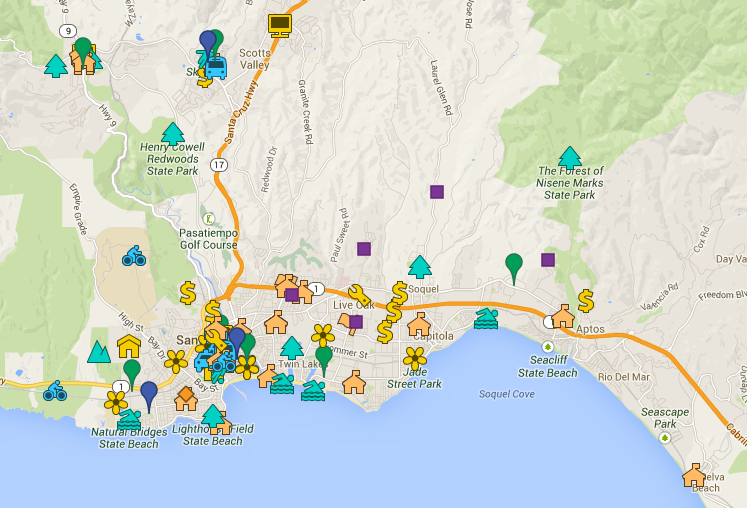 For two weeks in October, people all over the world gathered to make maps. Thanks to these map jams, 55 cities from Rome and Asheville, to Melbourne, Paris, Austin, Santa Cruz, Barcelona and many more now have public maps of sharing services that exist locally. As a whole, we have the beginnings of a global sharing map.

This is important because sharing services aren’t always easy to find. Big businesses make their presence well-known through an incessant barrage of advertising, but the shared stuff sometimes flies below the radar. The goal of these map jams is to put these things on the radar; to shine a light on all of the things that build local resilience, strengthen communities, and advance the sharing movement.

Some of the maps, including the ones for Paris and Austin are densely-packed with pins, reflecting a local culture that is already engaged in the sharing economy. Others, such as the Arab Countries map, are sparsely pinned but are incredibly inspiring as they illustrate an emerging sharing economy.

Parks, libraries, coworking spaces and credit unions were commonly-mapped features, but each map also has pins that reflect the area’s distinct culture. Here, a handful of map jam hosts share the details of their jams; what form they took, how they went, what they plan to do with the maps, tips for future map jams and any big picture takeaways they might have had.

With so many people participating, they were able to break down into smaller groups to focus energies. According to host Darren Sharp, this facilitated “lots of great discussion and networking amidst all the mapping activities.”

The mappers got off to a good start but only mapped a fraction of the sharing services in Melbourne. The next step, according to Sharp, is to share the map with the wider community and encourage the ongoing development of the project.

For future map jams he recommends setting aside at least three hours for the event and find creative ways to keep people focused on the task at hand as it’s easy making new friends and getting caught up in conversation. He suggested holding annual map jams to bring the community together again, add new sharing services, and refresh existing or out of date ones.

“I think map jams are a great opportunity to make the invisible visible and help local communities connect the dots in their city,” he says. “As the map starts to take shape it becomes a powerful reminder of the strength and breadth of the sharing economy.” 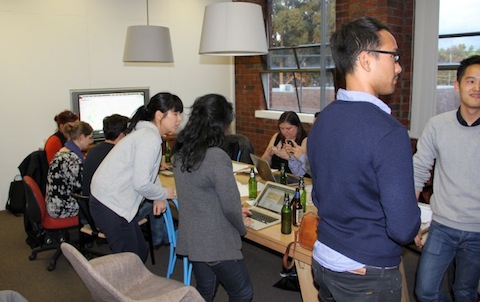 The mappers were surprised, after breaking Austin down by sector, how many things they had to pin. Three hours wasn’t enough time to finish.

“It turned out great, but its definitely a work in process,” says Pilgrim. And as communities evolve and grow, it always will be.”

Making new connections was, for Pilgrim, the best part about the map jam. “It’s always revitalizing,” she says, “to meet other engaged individuals with similar passions and interests and an investment in working towards a more just and supportive community.” 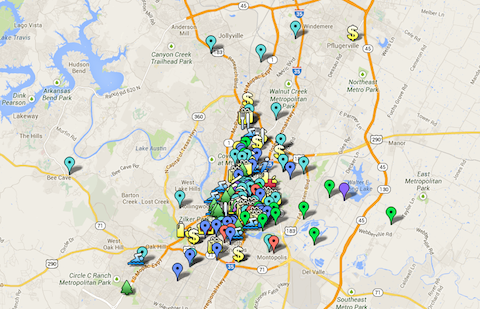 Austin’s got a lot of sharing going on!

Simone Cicero – Rome, Italy
The Rome map jam was organized by Ouishare Italy and held at SPQwoRk, a local coworking space. It consisted of six people working, as well as some visitors. Taking place on a warm October Saturday at a cozy location, the event lasted three hours which, according to host Simone Cicero, was just the right the time to chat and think about more future projects and the future of OuiShare Italy, while they were mapping.

The group had some difficulties importing existing databases (for things such as bike- and car-sharing spots) and is looking for automating scripts to do the job. They also got into a discussion about whether to add strong, politically-oriented initiatives: the knowledge commons, the occupied Teatro Valle and occupied spaces with a prominent social/collaborative mission. In the end, they decided to map some of them.

Ouishare Italy is going to use the map as a foundation for more mapping efforts. They’ll try to embed existing datasets (“This is a topic,” says Cicero, “that should be featured on Shareable: How to import existing sharing datasets into city sharing maps.) There’s also talk of moving off Google maps to a more independent map system.

For Cicero, the best thing about the map jam was helping with Shareable’s global initiative and spending an afternoon together. “I think Shareable now has the duty,” he says, “to move forward with this mapping initiative.” 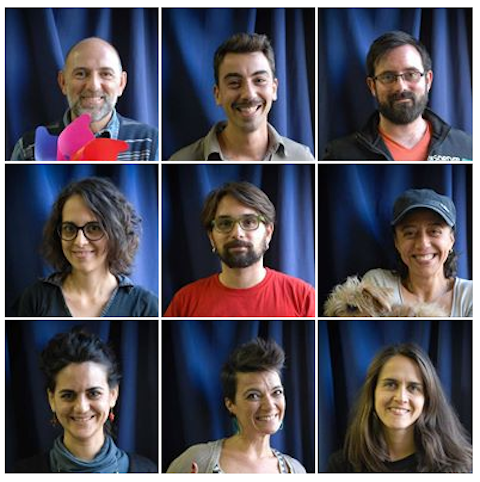 Ahmad Sufian Bayram – Arab Countries
While most of the map jams were in-person, the Arab Countries map was created by a virtual team that spanned numerous locales including Syria, Egypt, Iraq, Algeria, Lebanon, Dubai, Palestine and Morocco. Hosted by Ahmad Sufian Bayram, a OuiShare connector, the event served to draw attention to the sharing initiatives emerging in the area.

“It was an online event, because the sharing economy still new in the Arab world,” says Bayram, “and we don’t have a lot of sharing initiatives in the region to host an event for each city.”

They mapped crowdfunding and crowdsourcing initiatives, bike and car sharing, hackerspaces and coworking spaces. Bayram was surprised by how many coworking spaces they found saying that the number was not a lot when compared with the US or Europe, but that it was larger than he expected. They chose not to map public parks and libraries because they have a lot so they’ll be added later.

Bayram published the map on his blog, to various Facebook groups and in a magazine for entrepreneurs. His advice for future map jams: announce it earlier to allow mappers more time to gather information so that they can spend the event pinning rather than researching.

He says the best thing about the map jam is the worldwide collaborative effort.

“What I really loved,” he says, “was that it was an international movement, where every sharing economy supporter hosts his or her local event and becomes part of the bigger map that shows the sharing initiatives of the whole world.” 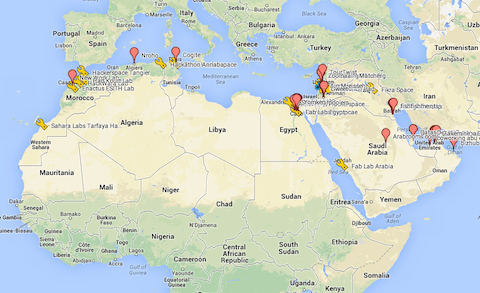 From the looks of it, the Asheville map jam may have been the coziest event, with mappers tucked in among books, musical instruments and warm lights. And the map jam was covered by Mountain Xpress, the local weekly newspaper.

One of the larger map jams, the event had 20 people and they mapped more than 100 resources and services. There are still more things to map, though, and a team plans to continue the process.

“As many options, as many opportunities there are to bring people together, and to collaborate and share, not just resources, but also knowledge and history,” Llewellyn told a reporter, “… that kind of sharing, collaborating and community-supporting is important for regenerating a city, a culture, a region and a nation.”

The Asheville map will be published on the Share Asheville site shortly. 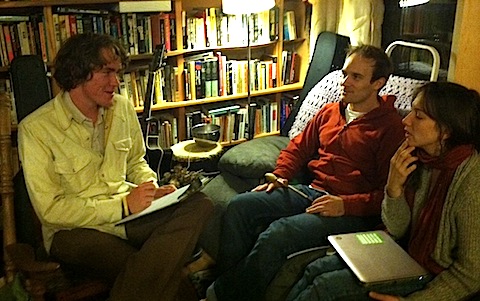 The Asheville map jam was cozy but 20 people came out to map!

David Weingartner – Germany
The map jam in Germany covered six cities: Munich, Karlsruhe, Cologne, Wuppertal, Hamburg and Berlin. Part of OuiShare’s DeTour, which was a leg on the OuiShare Europe Tour, the map jam wasn’t limited to one event, but stretched throughout different stops on the tour. This allowed people with local knowledge of the different cities to add to the map.

“Depending on the number of people that attended the events,” says OuiShare connector David Weingartner, “we had sometimes more and sometimes less input. Mostly people approached the map jam stand and added data as soon as their mind stumbled upon something they could map in their city.”

According to Weingartner, the things mapped reflected the attendees of any particular event.

“When our events were mostly visited by startups and entrepreneurs from the sharing economy,” he says, “the map reflected this. At other events we had more of a grassroots audience of local activities, so then we had more dots on the map with for example urban gardens, repair-cafés and the like.”

The plan was to map all the cities on one map in different layers, but they found that Google Maps restricts how many layers you can have so each city now has a different map. The team is looking for a solution to put the data they have into an open-source map which can reflect all that they’ve mapped on a country scale. They’re open to suggestions and help with this.

There was a lot of enthusiasm around the project and the plan now is to hand the maps over to the local communities to add to it, use it and adapt it to their needs.

Some initiatives have said that they will import maps they already may have, embed it on their websites and spread it to make it accessible to as many people as possible. The map jam team was also approached by people with similar ideas and approaches for mapping their cities.

“We will find a way,” says Weingartner, “to put the efforts together and synergize. As a future vision,” he continues, “it would be great to see an aggregated world map going beyond the borders of cities and countries.” 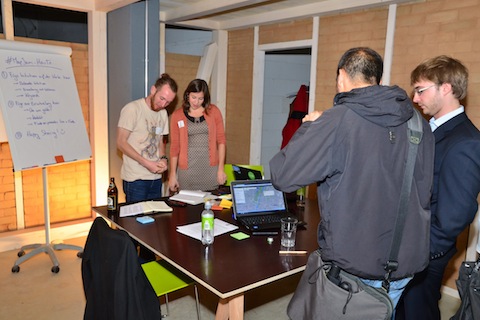 Cat Johnson – Santa Cruz, California
In Santa Cruz, I hosted a map jam at Cruzioworks, one of our local coworking spaces. We had six people researching and mapping what has proven to be an ever-growing list of collaborative, open stuff.

After the ice-breaking technical difficulties, we pinned farmers’ markets, libraries, parks, cohousing projects, coworking spaces and the bike church. We also mapped a repair cafe, toy-lending libraries, community centers, Little Free Libraries, community gardens, the Resource Center for Nonviolence and more. Our list grew far beyond what we originally came up with and continues to be a work in progress. The map has been updated regularly and as one participant said, “I know there’s more!”

We also came up with a bunch of organizations and events, including Santa Cruz Open Streets, our local TimeBank and the Guerrilla Drive-In, that don’t have set locations. For these, we started a separate directory that may be added to a website at some point.

My big takeaway from the map jam is a renewed sense that we are far more knowledgeable and informed as a group than we are as individuals. Every participant knew of something for the map that the others didn’t. It was a great lesson in the power of collaboration. When I posted the map to Facebook, the first response was an out-of-town friend saying, “Cool! My friend just moved there and would love this. Well done.” To which I responded, “Nice! That’s exactly why we did it.” 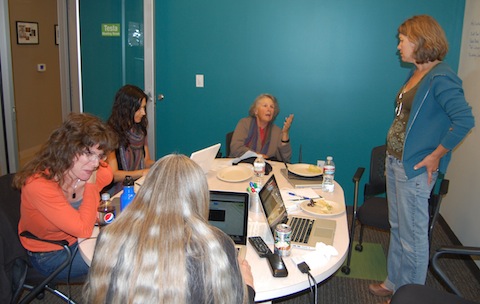