Book Review: 'Ours to Hack and to Own' - Shareable
Skip to content 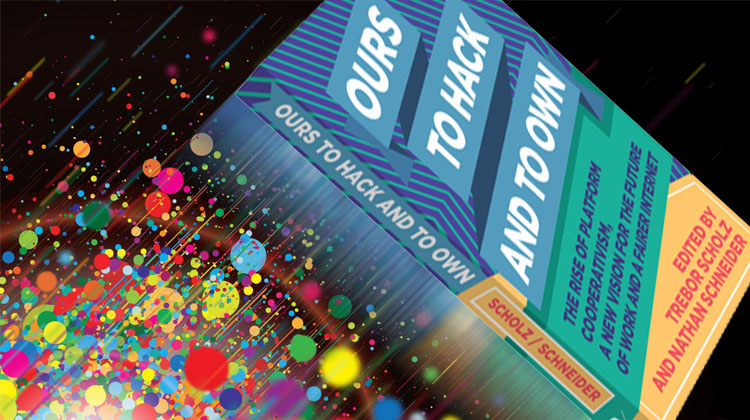 If you've ever wondered about how a new, collaborative, sustainable, democratic economy might work, the new book, "Ours to Hack and to Own: The Rise of Platform Cooperativism, a New Vision for the Future of Work and a Fairer Internet," is for you.

The book is edited by Trebor Scholz and Nathan Schneider, the organizers of the Platform Co-operativism events in New York, who have really put this movement on the map. With contributions from scores of contributors and case studies of working platform co-ops, as well as guidance for any would-be platform founders and designers, "Ours to Hack and Own" provides the most comprehensive summary of the burgeoning platform co-op movement to date.

At its simplest, the platform co-op concept is pretty straightforward: If "we the people" own and democratically control the platforms we use, we all get a better deal; without external investors syphoning off funds every quarter, any value created can be recycled within the platform; workers get paid more (and, most importantly, a real liveable wage), customers get better value and, together, we set the rules. The profit motive, of conventional "platform monopolies" like Uber, Airbnb, and Deliveroo is replaced in favour of "benefitting the community the platform serves."

It's a simple concept, with noble and laudable objectives which, ultimately, provides a model for a completely new economy. That may sound grandiose but, unlike other movements — or startups claiming they will disrupt the norm — the platform co-op model genuinely has the potential to kick-start a new way of organising life as we know it, because it is rooted in collective ownership.

This ownership revolution is just one aspect of what makes the platform co-op model so enticing and grounds it within a pre-existing legal model, established in 1844 by the Rochdale Pioneers. Bringing the co-op movement up to date for the Internet era and equipping ourselves with the right tools to organize effectively, collaboratively, and democratically is what "Ours to Hack and to Own" is all about.

The book starts with intros from Scholz and Schneider who define the main tenets of platform coperativism as "communal owernship and democratic governance." Susie Cagle reminds us of the seven cooperative principles and Jessica Gordon Nembhard outlines eight facts about cooperative enterprise:

Part two takes us on a whistle-stop tour of "platform capitalism" with insight from a range of authors.

Platform cooperatives — as a direct affront to the platform monopolies characterizing digital industrialism — offer a means of both reclaiming the value we create and forging the solidarity we need to work toward our collective good. Instead of extracting value and delivering it up to distant shareholders, we harvest, circulate, and recycle the value again and again. And those are precisely the habits we must retrieve as we move ahead from an extractive and growth-based economy to one as regenerative and sustainable as we're going to need to survive the great challenges of our time.

Juliet B. Schor reminds us that, even within existing alternative economy communities, such as time banks and food swaps, exclusive behavior, and discrimination can ferment and the platform co-op community would be wise to tackle the aspects that undermine egalitarian goals from the outset.

Mackenzie Wark explores the idea that a "third order of commodification" — which he calls "vectorialism" — undermines society through the use of brands, patents, copyrights, trademarks, and infrastructures which limit or control flows of information.

Stephen Hill discusses the "uber-ization" of work and the "race to the bottom in the freelance society," arguing that cooperative platforms and greater economic democracy can offer consumers an alternative to runaway capitalism.

Christopher Spehr co-opts SpongeBob Squarepants to help explain the issues for platform workers. He argues for a "bill of rights for the age of algorithmic capitalism" including new labor rights, entrepreneurial rights (today's equivalent of antitrust laws), and a "new legal framework for a new regime of accumulation" that gives the economy "a social purpose and a base in democratic values."

Kati Sipp highlights the need for "portable reputation" within the platform co-op economy so that users do not need to start from scratch and build up trust in every new community they join (like we propose in PLANET). Kati suggests that the platform co-op community can borrow insight from existing, offline worker-led unions which have already found ways to deal with multi-employer, dissaggregated work situations.

Dmytri Kleiner explains how capitalist platforms "based on the sale of audience commodity and capturing marketplace rents demand a sacrifice of privacy and autonomy." He goes on to detail how "disintermediation" was central to the early visions of the Internet, which was going to eliminate middle-men by allowing us to deal with each other directly, but how, in reality, today’s web is more mediated than ever before by large corporates and Internet Service Providers who successfully invoked policies of "antidisintermediation." This takes a little bit of brain power to get your head around, but what he proposes is truly salient: that the platform co-op movement must develop a policy for (you've got to love this new word) "counterantidisintermediation" meaning that, for the vision to succeed, platform co-ops must not rely on private servers and admins, but instead leverage the computational capacity and network access of the users' own computers, "so that each new user adds more resources to the platform than they consume."

The last chapter of section two is from David Bollier who discusses how access to digital commons in which groups have the tools for "free and responsible association for common purposes" producing hugely valuable networks, the likes of which make Facebook and YouTube look "rudimentary." He asserts that "the value potential of the commons has been deliberately stifled as part of the business model" of existing, privately owned platforms, and it’s hard not to agree. He goes on to explain how "smart contracts" and "open value networks [will] surpass the value-creating capacities of conventional open platforms." It's a thoroughly enticing vision.

What's particularly enjoyable about all these chapters, as well as the rest of the book is that they’re short, often no longer than three or four pages, which replaces the usually mind-numbing nature of such complex issues with the charm of individual enthusiasm.

Part three of the book rattles through some case studies of existing, successful, platform co-ops. From the poster-child of the platform movement, Stocksy United, to Fairmondo and Coopify, all the best examples of this new movement in action get a mention. Gratipay, FairCoop, Member’s Media, TimesFree, Snowdrift.coop, Resonate, Loconomics, NYC Real Estate Investment Cooperative, Robin Hood Collective, and Seed.coop are all detailed.

The rest of part three covers how we can build an "internet of our own" with specific guidance for would-be platform founders and designers. There is a wealth of well-researched and valuable information in this section and numerous suggestions and ideas which the proponents suggest should be encoded in viable platform co-ops.

Janelle Orsi suggests that platform designers should enable mechanisms to prevent the platform from being sold, to put a cap on pay-outs and compensation, and adopt a staff trusteeship model of governance. Speaking from experience, Caroline Woolard suggests potential platform co-op founders should consider alternative approaches before launching into the unknown, by asking: Can you make a platform for an existing co-op? Who will build the cooperative platform? How much time and money do you have? And, what if you ran events instead of building software? Her observation that the knowledge built into real life communities won’t deliver 404 errors a year down the line reads like solid, experience-based advice.

Melissa Hoover outlines the different forms that co-ops can take: Consumer co-ops, producer co-ops, worker co-ops, and multi-stakeholder co-ops are all explained in detail. David Caroll provides some extremely valuable observations of which platform co-ops are well placed to take advantage. For example, the bursting content bubble, the over-crowding of app stores, the advent of chat bots and chat interfaces for apps, the need for co-owned AI and an alternatives to private clouds, the need for replicable legal frameworks and new "privacy-positivity" as a competitive advantage over platforms backed by venture capital.

Marina Gorbis encourages platform designers to incorporate some simple principles to achieve positive outcomes for platform workers including "earnings maximisation," stability and predictability, transparency, portability of reputation, upskilling, social connectedness, bias elimination, and successful feedback mechanisms. Danny Spitzberg covers how crowdfunding can become stewardship when a community is emotionally engaged with a project through the process of on-going "barn-raisers." Taken together, the wealth of advice crammed into these pages is truly invaluable.

Part four, the final section, covers "Conditions of Possibility" with another 12 case studies on interesting projects and some more condensed wisdom from a host of additional authors. There’s even more guidance for those wishing to: escape the trappings of neoliberalism, understand the role of finance and capital, to employ "a code for good work," to set up tech co-ops, to develop union co-ops, and for those who wish to co-create a "theory of value" for platform co-operatives, or to develop public policies for "digital sovereignty" or to understand the legal and governance structures available.

"Ours to Hack and to Own" is an extremely timely publication covering every aspect of the legal, social, technical and economic aspects of the platform co-op movement. Although it's focus is on platform cooperativism, it is key reading for anyone with an interest in creating a more collaborative, equitable, and sustainable world. Whether you're coming from an environmental, social, or economic perspective, platform cooperativism is the process through which all progressive movements can unite.

I leave the final word to Yochai Benkler, who wrote: "At no time in the two centuries since cooperativism first appeared … has it been more feasible. That it is feasible, however, does not make it inevitable. As a movement, cooperativism will only succeed by moving fast and decisively, learning from the near past, and sharing our experiments and knowledge quickly and repeatedly in a network of cooperatives."

Let's get involved. You can buy "Ours to Hack and to Own" from OR Books.

If you are interested in the topics above, come meet the people who are co-creating the platform co-op economy at Open 2017 – Platform Co-ops, a two-day conference at Goldsmiths, University of London on Feb. 16-17.

The Open Co-op was founded in 2004 with the purpose of “building a world-wide community of individuals and organisations committed to the creation of a collaborative, sustainable economy”.The idea

The Open Co-op was founded in 2004 with the purpose of “building a world-wide community of individuals and organisations committed to the creation of a collaborative, sustainable economy”.

The idea was to help people collaborate and co-opareate on a global scale by using a new software platform which we called PlaNet. You can see what we thought this might have looked like from the screenshots of PlaNet we developed in 2004.

We also developed the following cartoon story to explain how PlaNet might benefit members of The Open Co-op. Again the cartoon and the story was developed in 2004, but was is set in 2010.