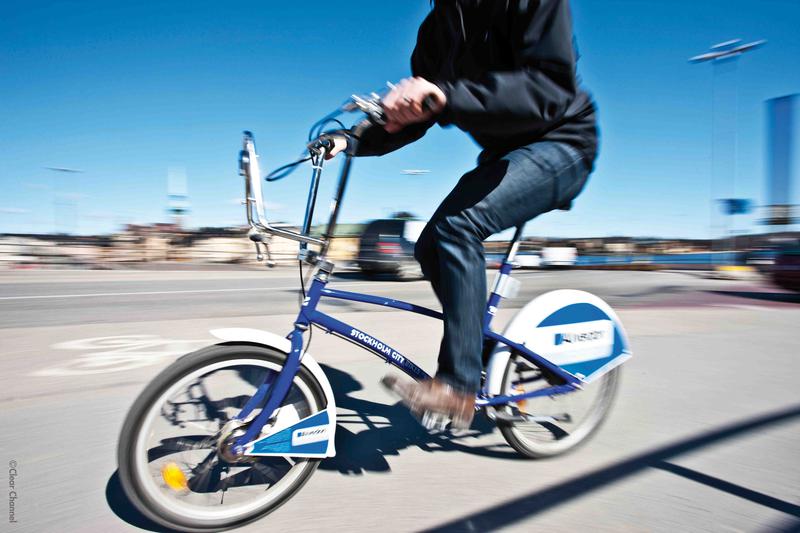 When Spring arrives to Stockholm, Sweden in May after a long, frigid winter, it is a verdant city if there ever was one. The metropolis is spread across fourteen islands and is home to the world’s first National Urban Park. Known as the EcoPark, this vast natural area encompasses 6,671 acres of city land from the miniature island of Skeppholmen all the way to Sörentorp in the north. Stockholm is green on the outside and on the inside, leading internationally when it comes to sustainable living.  In this hip, Scandinavian city organic is the norm, eco-friendly is mainstream, and locals share a deep respect and love for the outdoors.

In fact, the city was named ‘European Green Capital of 2010’ by the European Commission due to its high environmental standards and continued sustainable development.  A fairly recent addition to Stockholm’s ever expanding ‘green’ culture is City Bike, a community bike share program and innovative supplement to the city’s public transportation system. From the 1st of April to the 31st of October visitors can rent a bicycle from City Bike for urban exploration. City Bike Stockholm is part of the SmartBike Clear Channel family which has similar successful bike share programs in Milan, Barcelona, Dijon and Oslo. In fact, it was the Oslo, Norway, system that prompted Stockholm city officials to invest in bike share for residents in Spring of 2006. City Bike opened in Stockholm in the fall of 2006 and currently has has 1,000 bikes for its 24,000 users made up of residents and tourists alike.

Despite being fairly hilly, cycling is popular in Stockholm in the Spring and Summer. Unfortunately, in the winter there is a bit too much snow on the ground for most locals to risk riding, though I did see a few dedicated souls pedaling through the slush. What’s more, when the city plows the streets after a winter blast snow is piled up on the side of the road in bike lanes forcing riders into traffic. Riding in snow, slush and ice in traffic is understandably not everyone’s cup of tea, and could be hazardous.

Clear Channel does not operate City Bike in Stockholm during the winter for similar reasons.  “It’s too dangerous,” says Johan Sundman of City Bike, “it is quite difficult to bike in the winter. You need a special winter bike and winter tires. We are not prepared to take the responsibility for people using our bikes in the winter.” Fair enough. While Clear Channel bike share may operate year-round in the temperate climates found in Barcelona and Milan, Stockholm’s extreme winter is something to be reckoned with. 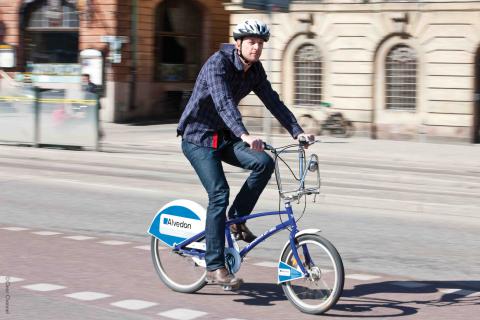 Now that the snow has finally melted, well-marked bike lanes appear throughout the downtown Stockholm. The city encourages riding by creating a safe environment for cyclists to enjoy. For example, bike boxes like those found in Copenhagen, Denmark, are used at traffic lights to protect riders from cars. I also noted a couple communal bicycle tire pumps set up at central bike racks in case riders are low on air. While the city has done much to promote biking, there is still a lack of normal bike racks and City Bike stations for checking out and returning cycles. City Bike hopes to have 160 stations, 2,000 bicycles and many more users in the near future, but this goal will require battling massive quantities of red-tape supplied by the city government.

The City Bike cycle itself is the blue twin of the Barcelona Clear Channel bike (Bicing), with a few differences which are barely noticeable. Small and squat, City Bikes have a child’s bike design which should help to prevent theft (in 2010, 100 bikes went missing). Like the Barcelona bike, the City Bike has a bell, three speeds, lights, reflectors, and a metal ‘basket’ in the front for handbags and groceries. Unlike the Barcelona bike, the City Bike has a taller seat for long Scandinavian legs along with one pedal brake and one hand brake, which is the norm in Sweden (in Barcelona both are hand brakes).

Non-residents can use City Bike by buying a three-day pass at tourist information offices and some souvenir shops. “That’s one extreme weakness we have in our system, you have to have a user card. We lose all spontaneous users,” explains Johan Sundman. Many visitors who see the City Bike racks might rent one on the spot if they could do so with a simple swipe of their credit card. Those who plan ahead can grab a card at tourist information for $16.00 and explore on their own set of wheels from 6am to 10pm.