At this year's Biennale Interieur in Kortrijk, Belgium, British architect Joseph Grima turned the opportunity to curate the show's cultural program on its head, creating a kind of anti-program revolving around a negative definition. Titled "SQM: The home does not exist," the series argues that domesticity as we knew it is—or should be—dead, and asks what will emerge to fill the void. Through film, text, two architectural installations, and a choreographed performance by domestic robots, Grima and his Italian design and research collaborative Space Caviar interrogate twentieth-century cultural assumptions within the context of today's economic and technological realities.

"SQM: The home does not exist" (SQM stands for "Square Meter") takes as its referent the inaugural Biennale Interieur, held in 1968. The first edition of the biannual home design show was rooted, somewhat paradoxically, in both the postwar celebration of individual homeownership, and the student and worker protests of the late 1960s. It celebrated the capacity of machine-manufactured interior goods to overturn conservative aesthetic codes while making cutting-edge innovations available to the masses. At the 2014 Biennale Interieur, by contrast, Grima points to a letting-go of permanent residence in favor of perpetual nomadism, and the replacement of an object-based identity with an online one. 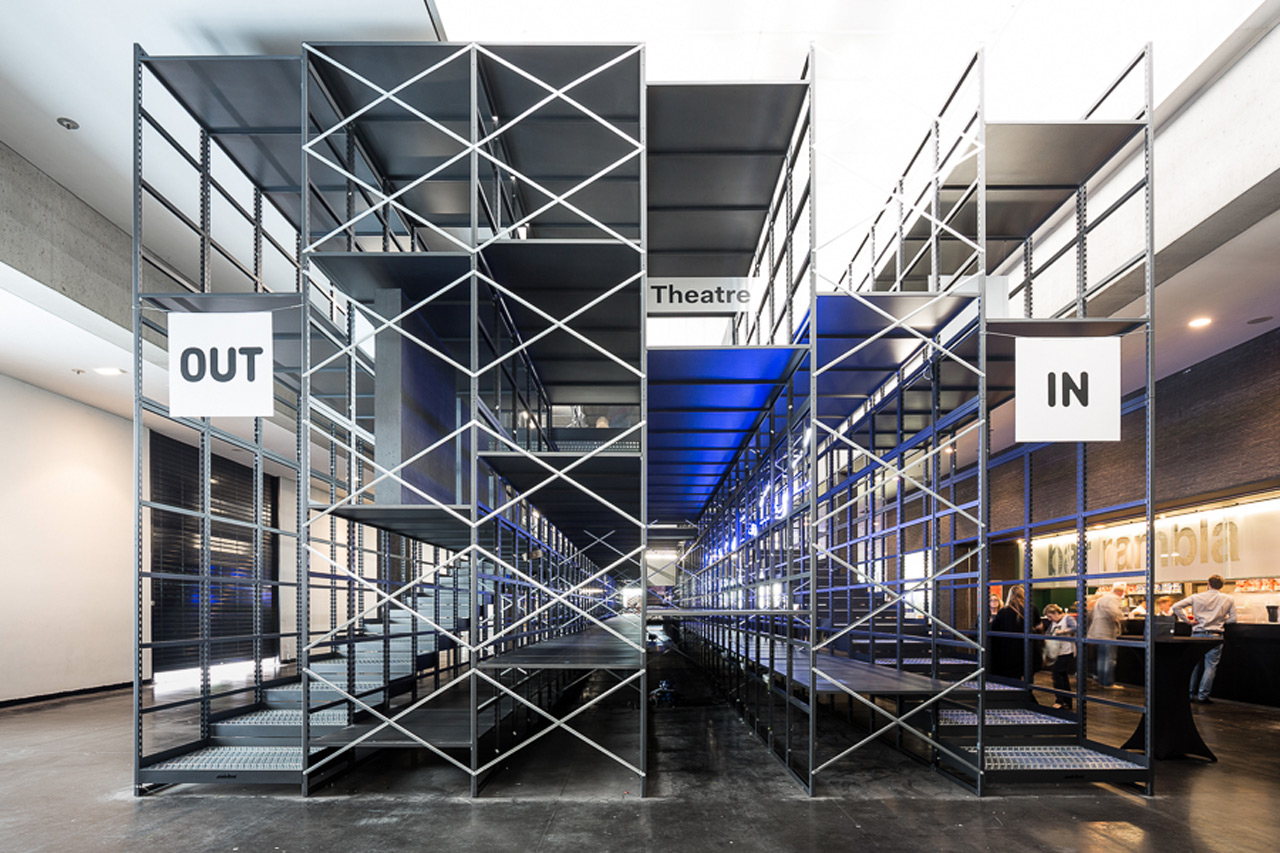 In Kortrijk's Xpo building, Grima and his team built a stepped maze of Procoss shelving units, a modular system developed around the time of the first Biennale Interieur, and an allusion to the contemporary economy of Amazon-type mass distribution. Called "SQM: Theatre of everyday life," the installation (which includes both a children's play area and a path to the skylights) comprises objects, photographs, drawings, infographics, and films exploring both historic and contemporary notions of domesticity. 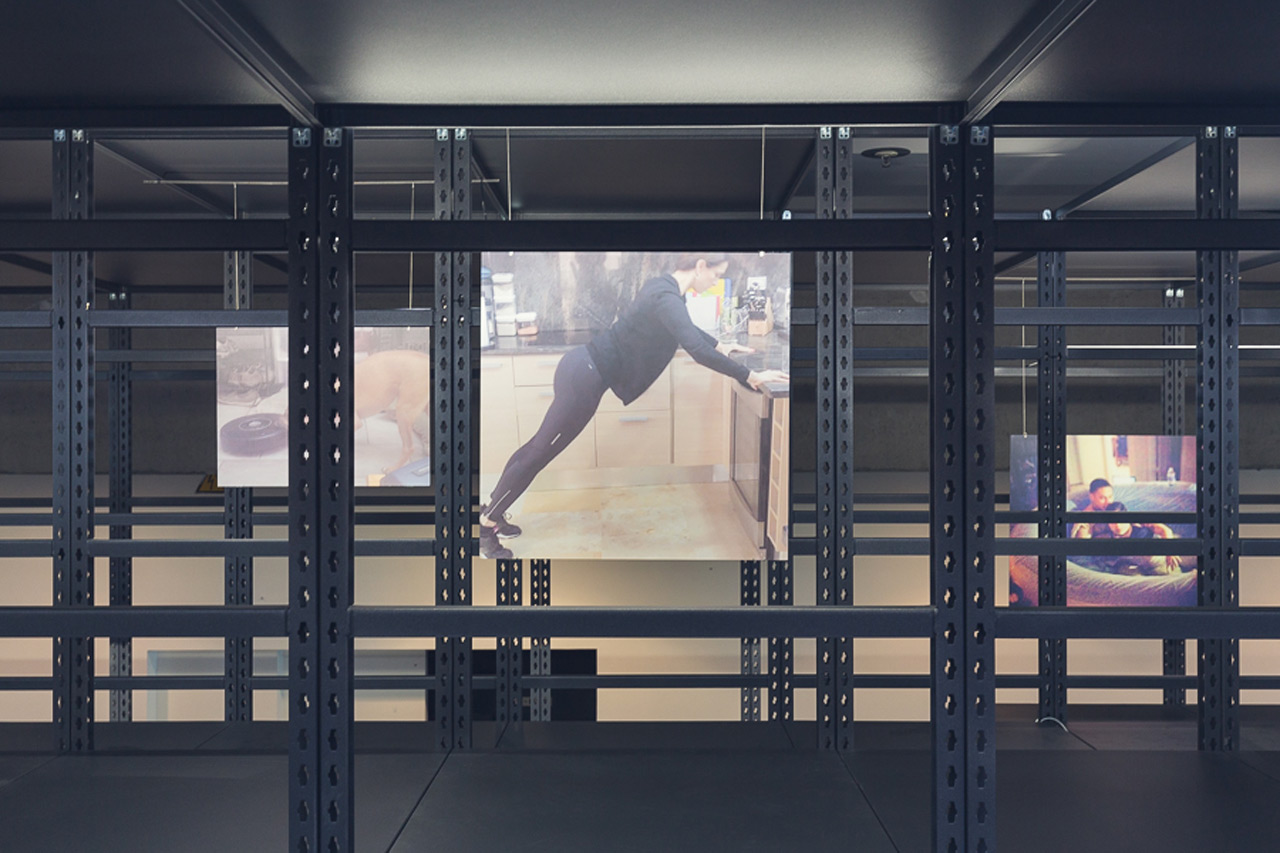 Folded into "SQM: Theatre of everyday life" are two other components of the Biennale Interieur's cultural program: a 100-person theater for lectures and other events; and a three-part film, SQM: Fortress of Solitude. The original film uses the story of a single mother—interspersed with make-believe advertisements—to question the relationship between privacy and the domestic sphere in the age of social media and the "smart home." 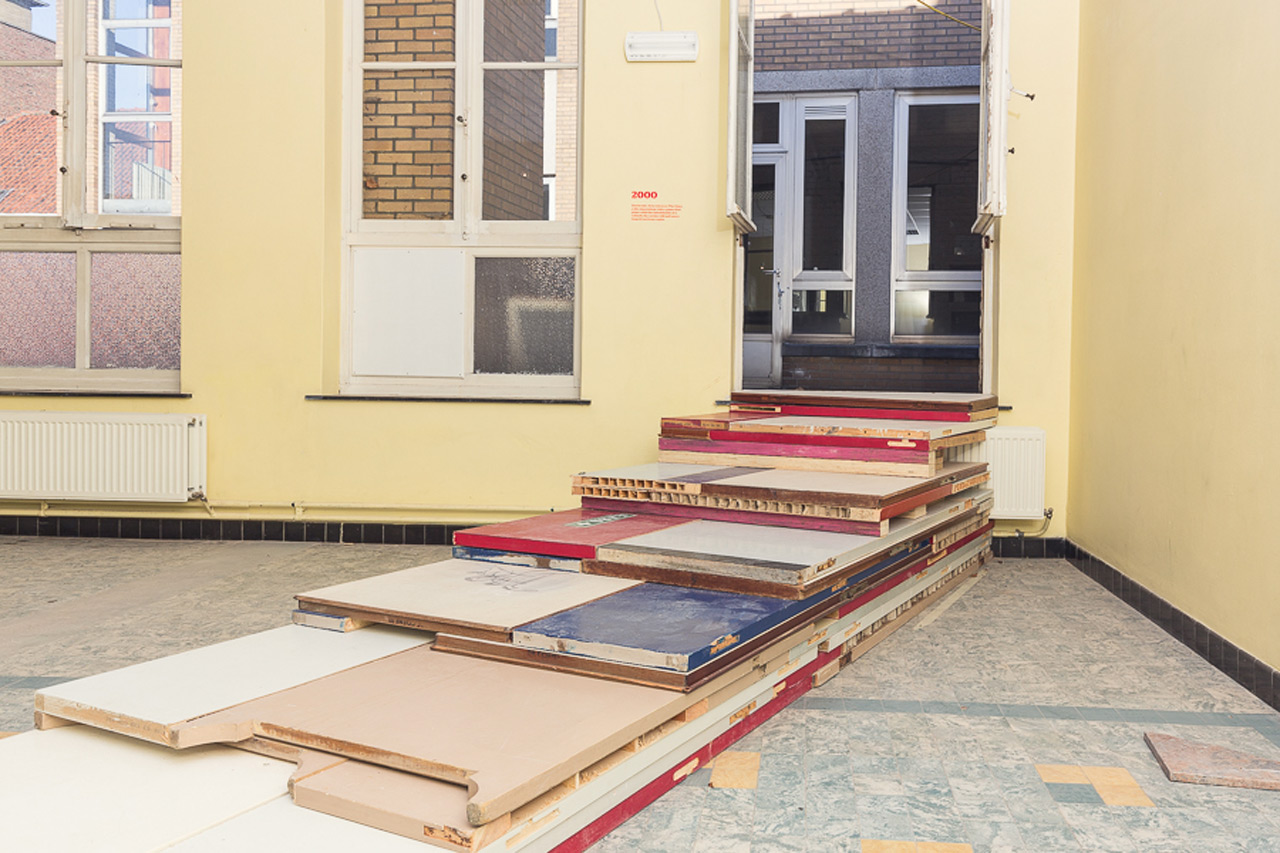 At the Broel School, which is slated to be torn down, Grima staged "SQM: The quantified home." Space Caviar and a graphic design firm engaged ten workshop participants in creative demolition, knocking down walls and ripping up floors to create an alternative path for a timeline of domestic space. Peppered with text, data, and diagrams, the timeline encourages visitors to consider domesticity as a cultural product rather than an absolute value. At the end of the timeline, in the school's gym, is "SQM: Roomba ballet" a literal dance of robotic vacuums that illustrates both the beauty and the creepiness of autonomous technology. 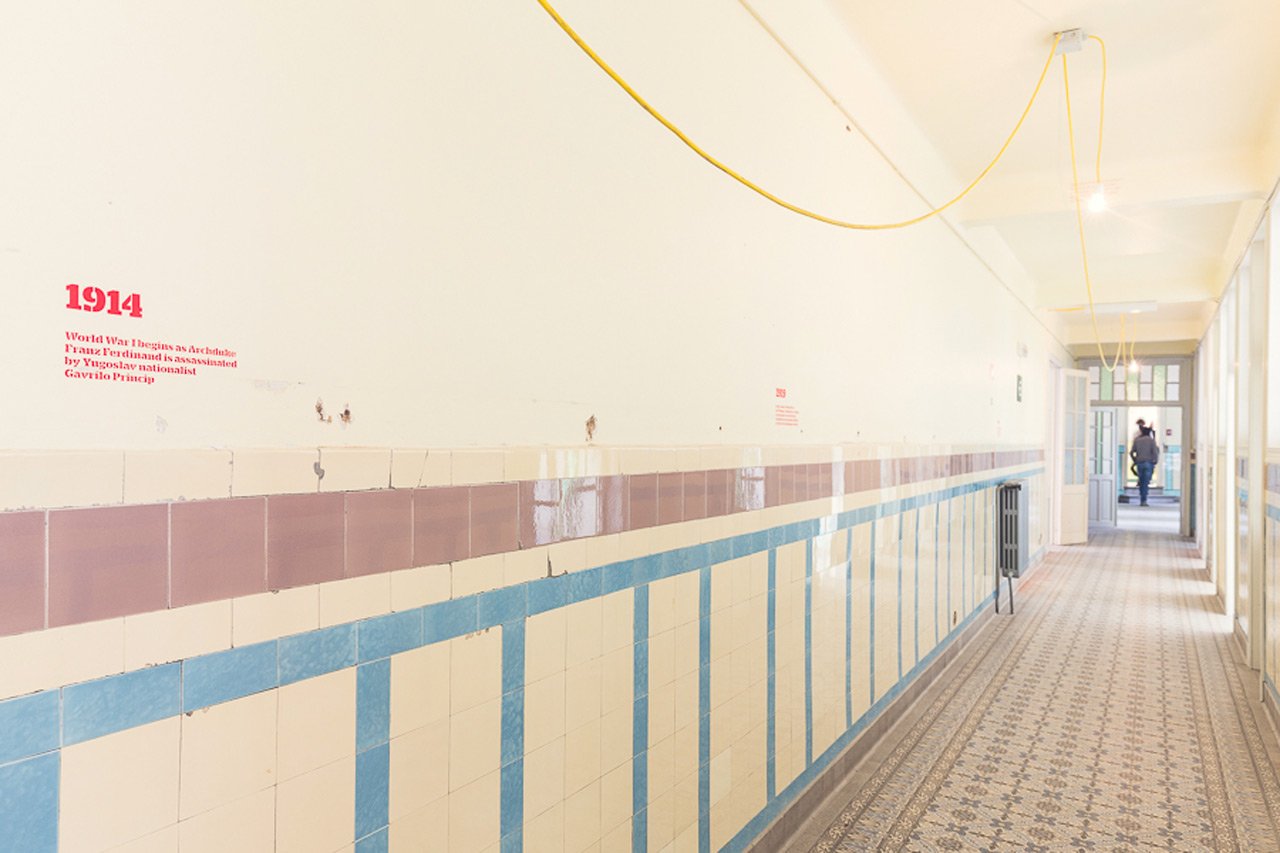 Inside the school, Space Caviar installed a multimedia timeline of ideas about domesticity. (Delfino Sisto Legnani via Domus)

For those unable to attend the 2014 Biennale Interior, Space Caviar offers SQM: The Quantified Home. The book, to be published in dust jackets featuring one of 22 wallpaper patterns, includes essays on the Frankfurt Kitchen, home life in Berlin and Dubai, Airbnb, and "the Pinterest home," plus a photo essay, data graphics, and several pieces of flash fiction. Like "SQM: The home does not exist," it aims to both interrogate and provoke, to encourage a thoughtful assessment of the future of homemaking through a grounding in the domesticities of the past. 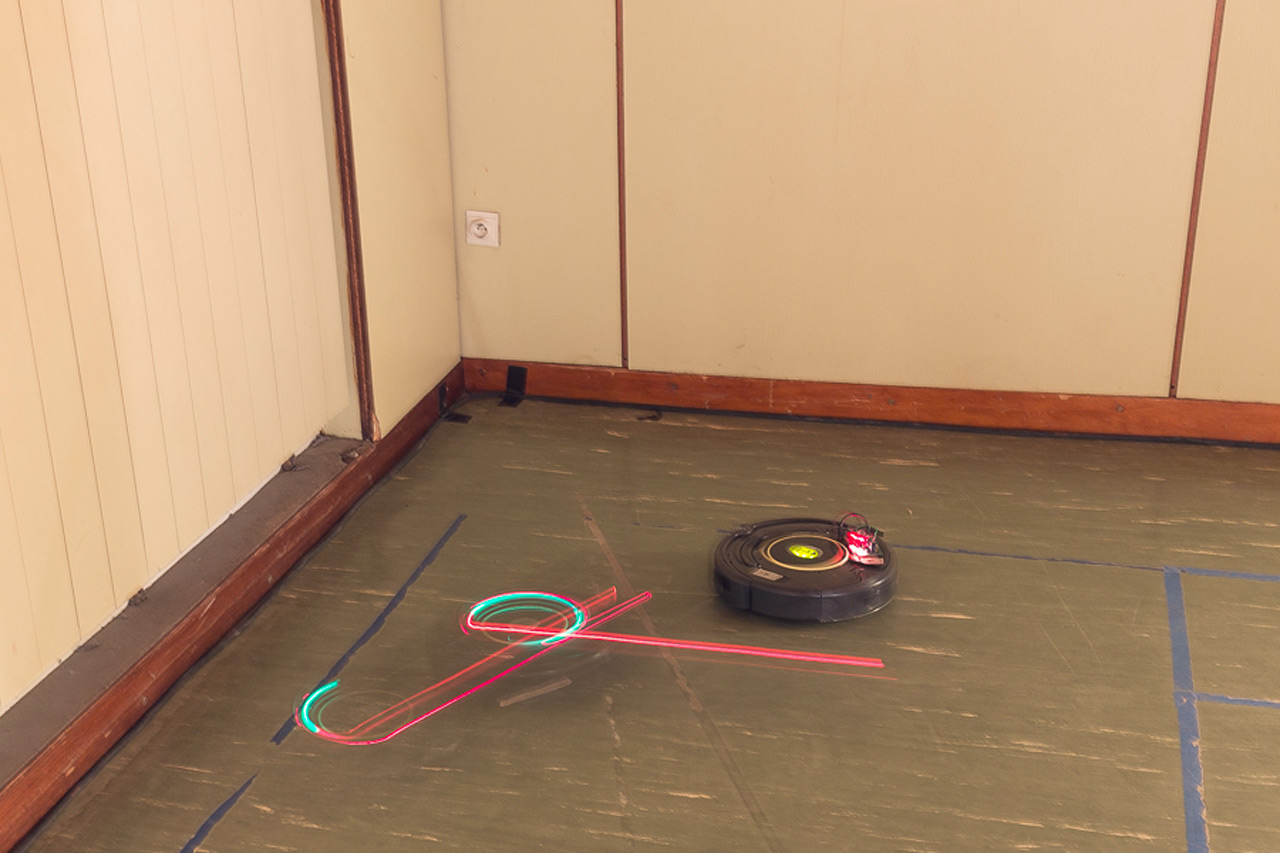