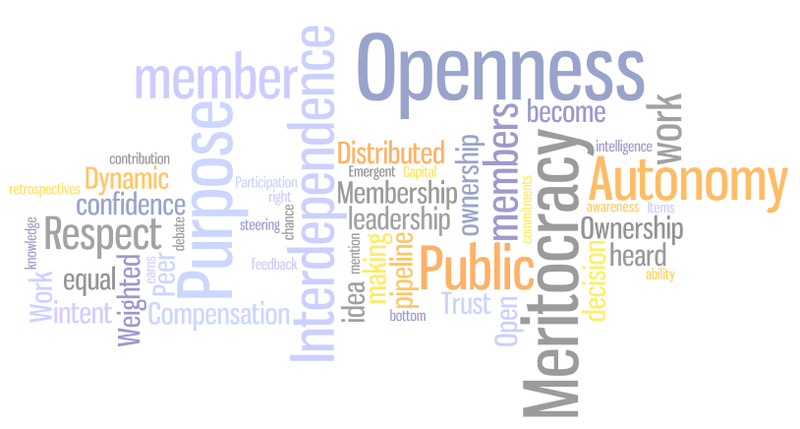 Being in a democratic, egalitarian workplace or organization would be a whole lot easier if we had not just the desire, but also the tools to help us succeed. Bettermeans, a new online project management software launched in November of last year, aims not only to provide those tools, but to change how we think about work.

Co-founder Shereef Bishay says the easiest way to understand Bettermeans and its alternative governance model is to think about Wikipedia: “Community users create content, and that content is approved by the community. Wikipedia is a successful example of a community- or user-driven project that many people are familiar with.”

He emphasizes that Bettermeans, like Wikipedia, is not new technology, but a new agreement among participating people on how to create content or workflows. He says, “Think of it as Wiki-Business.”

Bishay and the rest of the Bettermeans team are advocating an Open Enterprise model because, as they say on their website, the workplace systems, structures, and philosophies that guide the vast majority of companies today are outdated and don’t reflect the changing world — or the way that technological innovations are helping people work together in new, different, and often better ways. They say that the conventional business model is broken because workers are unhappy, corporations are sluggish instead of agile, and innovation is smothered in a top-down model.

The Bettermeans site also explains that “It’s broken because the current business model focuses on goals, and thus acts as if the ends can justify the means. In such an organization, the what to do is never lost. Only the why it is being done. And when the why gets lost, Merck ends up selling poison in the name of ‘healing the sick’… Monsanto keeps a strangle-hold on the world’s supply of seeds and uses profoundly unethical and illegal practices to ruin traditional farmers in the name of ‘feeding the hungry’… And Nike uses sweatshop labor, abuses workers, and pays well below third world minimum wages — even circumventing local laws to do so… all in the name of ‘inspiring today’s youth to reach their highest potential.’”

Bettermeans helps organizations stay on track by providing a way to keep the ends from justifying the means through community engagement and a participatory model. What does this mean in practice? Bettermeans provides a project management system that incorporates not only shared tools like wikis and task lists — akin to existing providers such as Basecamp — but also provides a way tasks, compensation, and priority can be assigned through the community, by voting.

While not a completely flat, non-hierarchical process, Bettermeans provides for tiered membership. The model is similar to the way many collectives and worker co-ops operate: new members are provisional and their votes are non-binding, members have binding votes, and core members provide leadership.

Though the project management tools can be helpful to existing or traditional businesses and organizations — it’s already being used by 400 groups — the flattened hierarchy and community focus make it different, and dramatically widens the application of the tools. Still, what really sets them apart is their emphasis on the Open Enterprise model.

Unlike most online project management tools, Bettermeans encourages groups to make their workstreams and their projects open to the public. This means the workflows are not only transparent — anyone can see them — but any interested person can join in by volunteering to complete tasks or projects. Currently, only 60 of Bettermeans’ groups have private workstreams.

In this model, users from the community who are excited about and have energy to work on projects are free to join public workstreams as provisional members. As they remain committed and produce results, they can be voted into full-voting status by existing members or users. Instead of a top-down model where owners hire employees, this system focuses on helping people with like interests find each other. So far, the model is being adopted primarily (but not exclusively) by volunteer-run organizations.

Bishay says, “Our system helps groups when they’ve gotten past they ‘let’s talk’ stage and are ready to work together.”

It seems that Bettermeans’ strength is helping skilled, experienced individuals — such as software engineers — work together on projects. Indeed, Bishay said, much of their governance model is based on that of Apache Software Foundation, a decentralized group of software engineers who come together to create open-source software.

One of the groups that is currently using the Bettermeans system is exactly that. Enspiral, a tech collective based in Australia but branching over nine cities in four countries, uses the system as their internal communications system. Joshua Vial, a team member with Enspiral, enthuses that finding Bettermeans was like “walking into what our dream company intranet would look like with a couple of years of development.”

Vial says that one of the differences between hierarchical and non-hierarchal organizations is efficiency: “The whole reason hierarchies exist and have become the dominant organizational structure is because they can make decisions rapidly. Bettermeans is designed so that large groups of people can make decisions very quickly without needing a hierarchy.”

He says that Enspiral really likes the performance tracking feature, saying that, traditionally, people are paid only on their inputs, like how much time he or she may be spending on a project. But, he continues, “People should be paid for how well they perform, not how busy they look.”

Bishay hopes that their model will help people challenge traditional notions of management and leadership, saying that the focus, much like a lot of the Internet, is on initiative, innovation, and reputations.

Looking forward to a world where geographically dispersed professionals act as autonomous agents working on projects that are community-generated that move forward when there is a critical mass of interest, skills, and motivation is certainly exciting.

The apparent limitations of this system are few:

Regarding these concerns, Bishay emphasizes that this system is not for everyone. But, for select groups who already have, or seek, this kind of autonomy, Bettermeans is providing tools to help them work together better.

Currently, Bishay and his partners are working with a legal team on how to fully implement these alternative work models into business structures that are legal in the U.S. Currently there are regulations and laws that make the co-ownership models difficult.