Better Blocks: One of Many Urban Acupuncture Needles - Shareable
Skip to content 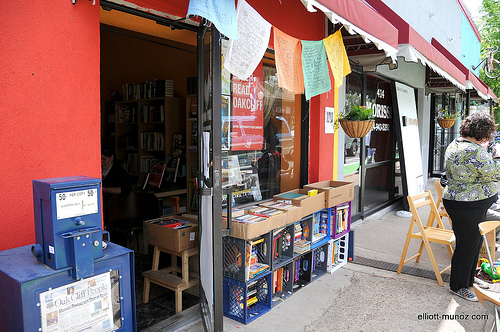 Change can be sweeping or incremental, depending on the task at hand and the effort applied. Some people live by the “Go big or go home” motto; others take baby steps. When it comes to urban renewal, the latter tactic is gaining momentum via a number of different initiatives being set into motion across the planet. In quite a few cities, for example, fallow land and decrepit building sites are being regenerated into pocket parks in order to provide shared green spaces in the midst of the built environment.

Tactical urbanism is one of the monikers applied to small-scale development projects that are tied to the bigger picture. Now, thanks to Finnish architect Marco Casagrande, a new term is being bandied about: urban acupuncture. Drawing from the ancient Chinese healing art, this strategy views cities as living, breathing organisms and pinpoints areas in need of repair. Sustainable projects, then, serve as needles that revitalize the whole by healing the parts. From Rio to Dallas, cash-strapped municipalities can no longer invest in massive developments. In their stead, citizens, activists, and architects lead the way on small projects that make big differences.

A patch of green commons in the midst of Montreal's skyscrapers. Photo credit: Payton Chung. Used under Creative Commons license.

Down in Dallas, some folks got together with the same sort of thinking. Together, they started the Better Block project which “temporarily revisions an area to show the potential to create a great walkable, vibrant neighborhood center. The project acts as a living charrette so that communities can actively engage in the 'complete streets' buildout process and develop pop-up businesses to show the potential for revitalized economic activity in an area. Better Blocks are now being performed throughout the country, and have helped cities rapidly implement infrastructure and policy changes.”

Here's a video of one of the Better Block founders, Jason Roberts, describing his Oak Cliff neighborhood and its transformation process:

Because the first Better Block project was so successful, the team has been hard at work on an encore and Roberts has become a much-sought-after speaker at new urbanism events across the country. And, being all about creating shareable communities, they've even put together a handy How to Build a Better Block guide to help other groups move forward with their own renewal projects.