Authors, Publishers and Supporters React to the Seizure of the People's Library - Shareable
Skip to content 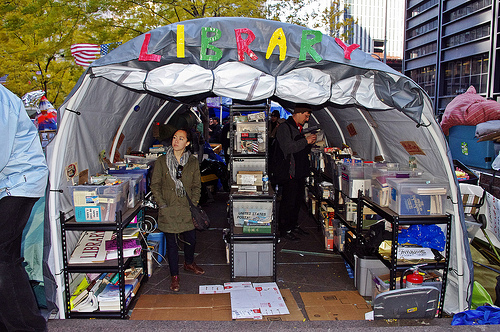 For bibliophiles or anyone with an appreciation for history’s grim ironies, the seizing of over 5000 books from Occupy Wall Street’s People’s Library during the raid Monday night was particularly troubling. While earlier reports that the books were destroyed or thrown away appear to be incorrect — the mayor’s office tweeted a photo of the books in storage — they cannot be claimed until Wednesday. And as the People’s Library blog notes, the photo does not guarantee that all the seized books and materials can be accounted for.

Regardless, the occupiers, authors, and publishers remain unbowed. As occupiers return to Zuccotti Park, the library has reopened. Within an hour, the reconstituted library boasted six titles according to Democracy Now, and a recent tweet from the @OWSLibrary Twitter account suggests that number is quickly rising:

Shareable solicited responses from authors, publishers, artists, zinemakers, and other Occupy Wall Street supporters whose books were seized during the raid. Responses were submitted at different times, and since the story is developing, each response includes a timestamp to provide context.

UPDATE 11/16/11 • 11:25am CST: Supporters of the People’s Library are currently retrieving what’s left of the books, laptops, and supplies that were seized. Despite the claims of Mayor Bloomberg’s office, not all books are accounted for, and many are destroyed: “only a few boxes of books and our (destroyed) laptops and one chair were at Sanitation” according to the People’s Library blog. Follow this regularly-updating post on the library’s blog and the tweets of @melissagira for more details and updates. 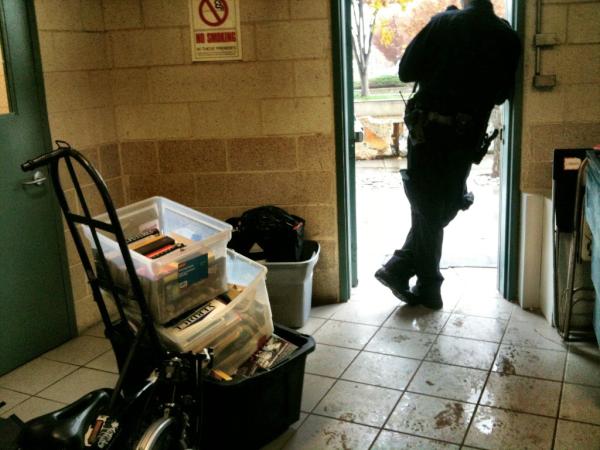 We will continue to update this post as we receive additional responses. If books or zines you wrote, published, or donated to Occupy Wall Street were taken last night, please add your voice by emailing responses to me at paul at shareable.net, or leave a comment below.

The beautiful library is gone. Our collection of 5,000 books is gone. Our tent that was donated is gone. All the work we’ve put into making it is gone. I’ve spent the last month and a half there. Currently I’m homeless so I’ve been completely dependent on the community that has sprung up there. I don’t know what is next and I don’t know how these next few steps will play out, however, I know that the one thing no amount of cleaning and bullying and policing can destroy is the tenacity of the human spirit. WE WILL OVERCOME!
11/15/11 • 1:28pm CST • via the People’s Library blog

If a lazy writer wants to shorthand a character, group or society as sick, thuggish and in decline, he can simply show a pile of books on fire, or in the trash. Destroying libraries is right up with eating dogs on the list of “Things That Just Societies Don’t Do.”
11/15/11 • 3:20pm CST

I was saddened and angered to learn of the destruction not only of the Occupy Wall Street encampment, but of the OWS library as well. The latter has symbolic meaning as the locus of the movement’s process of intellectual self-discovery. I understand that the library included a copy of my book The End of Growth. I am gladly contributing another copy.
11/16/11 • 11:16am CST

It saddens me to hear of the destruction of any library, large or small, but it does highlight the difference between the two sides in this conflict. I do not know of a single case in history when the side destroying libraries has been cast in a favorable light. It is the mark of an unjust action by a desperate force. I would suggest that as the next camp is built, the library be made twice as large, and if it is torn down, then the next twice that size. Books give us the wisdom of a thousand years and the strength of countless cultures. No petty regime in any location on this planet can resist their might. The world is with you.
11/18/11 • 9:58am CST

I dropped off a couple of relevant books at #OWS last month, and left a signed copy of “Dignity” because it’s fitting. I guess it’s also fitting that it was seized with all the other books, as that’s just the kind of dystopian raid I wrote about.
11/15/11 • 9:05pm CST

Gabriel Levinson
Editor/publisher of A Brief History of Authoterrorism.

All those books…all our books. For what? What kind of show of force is this? The destruction of the People’s Library is damning. It is chilling. And it is reprehensible. We are angry, we are many, we are well-read…no wonder Bloomberg is scared. What can be more powerful — more influential — than the educated, literate masses?

This affront to our freedom of assembly reverberates across the nation and, subsequently, history. This shameful government action only serves to fuel the momentum of OWS: Stay peaceful America, but get louder. History is listening. Those were our books, you fuckers, you will not get away with this.

Congratulations Mayor Bloomberg, your name is now synonymous with the dirtiest word in the English language: censorship.
11/15/11 • 1:28pm CST

It was apt that On Gandhi’s Path: Bob Swann’s Work for Peace and Community Economics should have been part of the Occupy Wall Street library in Zucotti Park, for Bob Swan exemplified the nonviolent autodidact radical charting a course to a better world with the help of his intellectual contemporaries and ancestors. He probably wouldn’t have been surprised by the iron-heeled NYPD raid. Nor would he have ceased his nonviolent direct resistance. Much gratitude and encouragement to the OWS communities for their straightforward witness; and shame on those who rout peaceful assemblies and scatter their libraries!
11/20/11 • 3:57 CST

The question we really need to be asking is this — Mayor Bloomberg, what is it about a free, open, public library constitutes a health and safety risk? Why do you need to use riot police to destroy a library in a park? What is so threatening about that idea? This action has mobilized the nation in defense of everyone’s right to assemble in the public square, to engage in direct democracy, to fully participate in civic life.  This violent eviction shows the true face of the corporate control of politics — which is a wake-up call that lot of the country needs.  The city, acting on behalf of corporate interests, didn’t “clear the park of protesters” — they destroyed a library with 5,000+ volumes, they destroyed a kitchen that was feeding thousands of people a day, they destroyed green power bicycle generators and a gray water system, a medical tent, a peaceful assembly. But as with every democratic movement in history, they can crush the things, but never the idea.
11/15/11 • 8:45pm CST

When my Manifesti of Radical Literature was rumored to be flying around the Occupy Wall Street Library, I didn’t know how the book’s core messages—to value the voices of women, to avoid replicating dysfunctional power structures in the process of resisting them, and to strive at all times for a creative but articulate expression—would be taken by a group struggling to acknowledge the foundational import of these very issues for implementing social change. Emails from readers heartened me, until this latest news. It’s likely that copies of Unmarketable were also circulating and destroyed—I know my publisher The New Press brought a few deliveries down to the library—but that book’s deliberately anticorporate stance has made it a frequent target in the last year, including by the art institution where I teach, so I’m slightly less surprised by the news that it may have been destroyed. But a 3″ x 5″ 64-page book I self published? That’s easily half jokes? WTF, America?

Then again I do write on page 25 in the text that “Radical literacy means throw this book away. Write your own.” Maybe cops are just really careful readers, and on our side. Maybe?

Michael Ruppert
Author of Crossing The Rubicon: The Decline of the American Empire at the End of the Age of Oil.

Benito Mussolini said that fascism should more properly be called corporatism because it represents the perfect merger of power between the corporation and the state.

I expected nothing less. The only difference is that my books and the books of people like Richard Heinberg will be buried in a landfill rather than burned, which would be an obvious waste of diminishing hydrocarbon energy resources.
11/17/11 • 2:07pm CST

Douglas Rushkoff
Media theorist, author of Program or be Programmed, and organizer of Contact.

I buy my books retail, through BN.com or Amazon because it’s cheaper to get them that way than through my author discount (if you can believe it). That’s how much of an advantage the large have over the small on the landscape of corporatism. So I bought a box of 50 Life Inc’s from BN.com, and brought them down to Zucotti Square with another dozen I had lying around. The beauty is that when I checked a week later, all but two were gone. The two remaining were in the Occupy Libary’s “reference section.” They explained to me that the library is not meant to contain the books, but to distribute them. We *are* the library, and must keep passing around our books to one another. In a sense, each book in p2p circulation is part of the living network of ideas. So while the cops may have killed the reference library and yanked a good many books out of the system, the library lives on for whoever happens to be holding one or more of the donated books. That makes it all the more like Fahrenheit, where the resistance consists of people who memorize and “become” the books in a bookless world.
11/15/11 • 3:30 CST

Destroying libraries during a raid is like shooting the dog. Oh, you can dream up endless excuses for why, but you’re a toolbag.
11/15/11 • 1:50pm CST • via @textfiles

Donate books to the Occupy Wall Street People’s Library in person or by mail: