As bike-share programs grow, how can they better reach underserved communities? - Shareable
Skip to content 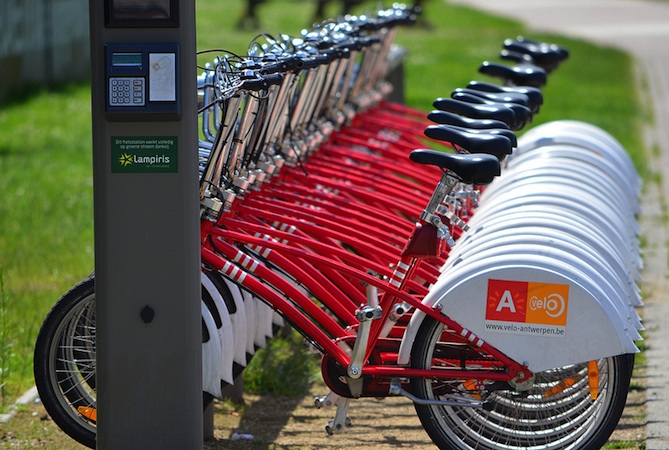 Bike-sharing systems have been growing in popularity across the U.S. in the past decade. Since the launch of Smartbike DC (now called Capital Bike Share) in Washington D.C. in August of 2008, residents in many major American cities now have access to a bike-share system. That's the good news. But the problem is that this growth has been uneven. Numerous studies of bike-share usage show that biking remains predominantly male, and skews white. Biking rates are also higher in high-income, urban areas.

"We worry about the perception and impact of bike infrastructure in certain places being associated with gentrification and displacement," says Zoe Kircos, director of grants and partnerships at PeopleForBikes, a membership organization founded by bicycle industry leaders, based in Boulder, Colorado.

Part of the problem is bad design. The first bike-share systems in the U.S. did not really consider equity and access as being central to their operations — not due to ill intent, but mostly ignorance or lack of resources, Kircos says. "It wasn't that people didn't want to, it was that people didn't know what to do."

But there are signs of change. New bike share initiatives are starting to put equity and access at the forefront. One of the first systems to really look at how bike-share programs could reach underserved communities was Philadelphia's Indego. This led to the formation of the Better Bike Share Partnership, a multi-stakeholder collaboration which has worked with several bike-share systems to be more equitable.

"Philadelphia was a testbed for all the things that we're working on," Kircos says. "[They] wanted to integrate equity strategies from the beginning for their bikeshare system."

Several of Philadelphia's innovations have now become standard. For example, Motivate, which runs FordGoBike in the San Francisco Bay Area, followed Philadelphia and other cities to create a program that provides anyone receiving benefits from programs such as CalFresh, the state implementation of the Supplemental Nutrition Assistance Program, or PG&E CARE, a utility-run financial assistant program, to be eligible for a $5 first year bike-share membership that they could pay for in cash.

"We wanted something that would be easily accessible, and linked to programs ppl already have," Paolo Cosulich-Schwartz, former outreach and communications manager at Motivate, says. "We wanted to provide the program to as wide a population as possible."

"[We did] robust community outreach," Cosulich-Schwartz says. "We held 30 public meetings and over 350 key stakeholder meetings over a two-year period to identify sites and permit systems across the all over San Francisco, Oakland, Berkeley, Emeryville, and San Jose." One of the results of this process showed that 35 percent of stations are located in what are called "communities of concern"— neighborhoods identified by the Bay Area's Metropolitan Transportation Commission as "Census tracts that have a concentration of both minority and low-income households at specified thresholds of significance."

The biggest challenge and barrier to seeing more diverse biking rates across the country, however, may be infrastructure. Low-income communities have often been underserved in many ways, lacking the same access to mobility as more affluent neighborhoods, and biking is no different. If roads are unsafe and bike lanes don't exist, it's hard to imagine people willing to bike.