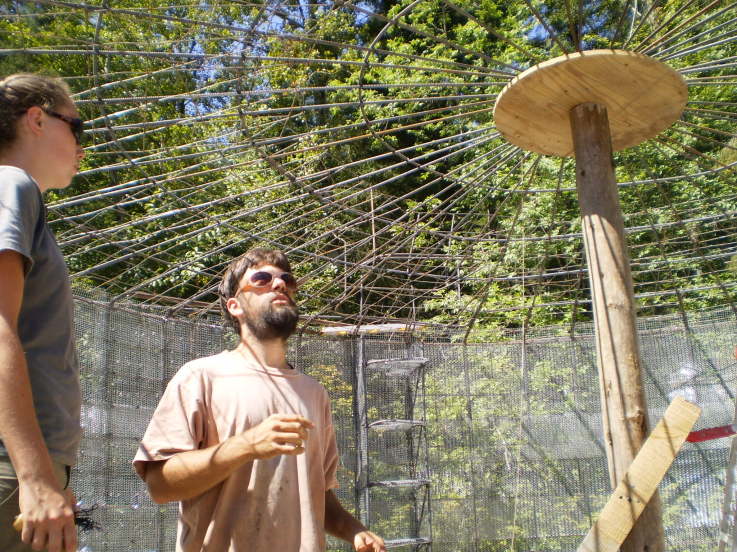 John Williams calls himself an aquarium fanatic. “I have six tanks right now – a 125 gallon, a 55 gallon, a 30, a 16, a 29…. The 125 gallon is ridiculously huge, especially because it’s all glass,” Williams says. “I stick with fresh water. Something like 75% of the world is covered in salt water, so I find fresh water more exotic.”

Williams is 22. He lives in an apartment in Cottage Grove, Oregon, a small town about twenty miles south of Eugene. Last spring he was working as a bartender when he heard about summer jobs designing and building an aquaponics greenhouse at Aprovecho, a 40-acre center outside of Cottage Grove dedicated to researching and teaching sustainable living practices and green skills.

Aquaponics is the cultivation of fish and plants in a recirculating environment. The fish waste flows to the plants and fertilizes them, and in turn the plants clean the water, which returns to the fish. Aquaponics is gaining in popularity in green circles in the United States, because it makes it possible to grow a lot of food – both fish and vegetables – quickly.

In a recent New York Times article, Micheal Tortorello wrote, “There is something about aquaponics that seems to inspire this quirky blend of entrepreneurialism, environmentalism and survivalism.”

That certainly seems to describe Williams, who fears that climate change will devastate the water supply. He immediately signed on for the Aprovecho summer jobs program. “It was right up my alley,” he says of the opportunity to help build an aquaponics greenhouse just a few miles from his home.

The program was funded by a three-year $400,000 Workforce Investment Act (WIA) grant awarded to the school district by the Lane Workforce Partnership, as part of the $787 billion American Reinvestment and Recovery Act. High school students and recent graduates of the South Lane School District, like Williams, were eligible to apply for more than 80 openings at several different job sites.

Aprovecho employed 15 men and women, all but one younger than Williams. They worked on three building projects concurrently: the 600-square-foot aquaponics greenhouse; a 10,000-gallon ferrocement rainwater catchment tank; and a solar shower.

Williams says the aquaponics greenhouse was the most complicated of the three projects. “It was a new design. We didn’t use someone else’s sketches, so that was definitely difficult,” he says. But Williams says the results were well worth the effort. Not only did he learn to work with other people to build new, green infrastructure. The project also transformed his life. 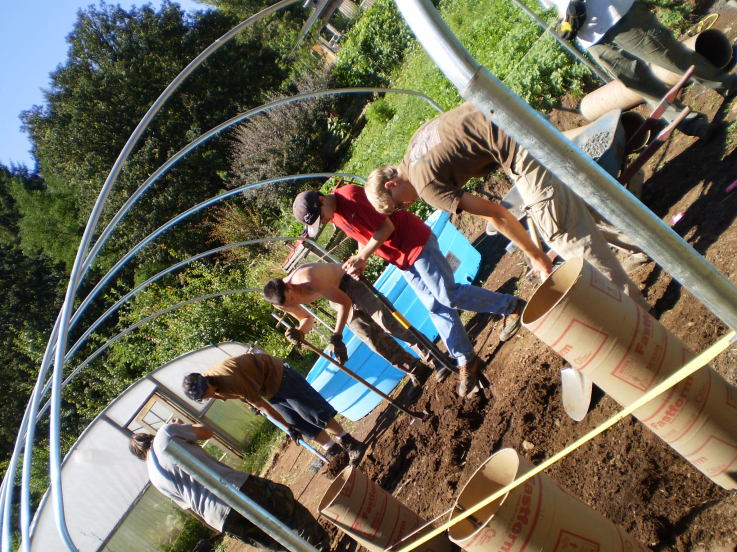 Working in the Hot Zone

The solar shower, which heats all the water in Aprovecho’s straw bale dormitory in the summer, is a relatively simple technology. “It’s a series of copper piping painted black. It uses direct sunlight to create heat instead of using electricity,” Williams explains.

The 10,000-gallon ferrocement tank catches rainwater from Aprovecho’s events center. It serves as a back-up water supply, which could be used for anything from watering their acre-and-a-half garden to fighting forest fires, says Rosie Kirincic, who lives and works at Aprovecho.

According to Williams, the cement tank is the simplest technology but was the most difficult of the three projects to complete. “It’s composed of rebar, concrete, and wire ties. Just having to move around all that rebar and having to twist a million little metal ties. That definitely took its toll on morale.”

The workers kept a blog of their progress over the summer, and Williams isn’t the only one who mentioned low morale, especially at the outset of the projects. “This week has been very difficult for some of us. I personally feel that we are slowing down in progress and losing a clear sight of our goals,” a worker wrote on July 17.

The heat played a role in the workers’ waning moods. “We had 110 degree temperatures when we were out working in the hot zone,” Williams says. “That’s where they plant their chili peppers, because it gets the most sun. And we were working all day long in the sun.”

“I don’t think that humans or any other creature should work in this heat,” a worker complained in his July 28 blog update.

According to Williams, laying the foundations for all of the projects was the hardest part. The workers had to clear the earth, level the ground, and build three different foundations all at the same time.

“It was like this hump we had to get over,” Williams says. “It was right there during this heat wave and everything was building up. We weren’t really seeing the progress we were working so hard for.”

“But that was just one step,” he continues. “Once that was done, things started coming together. The walls started piecing together. We actually looked at what we were doing. People would come out and say, ‘Hey this is really great. I can’t believe what you guys have done.’ That was really a good boost for us.” 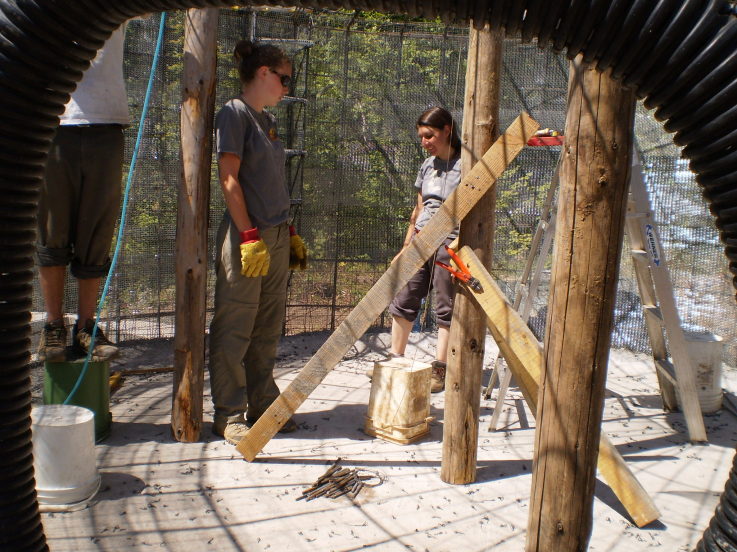 Not surprisingly Williams got really absorbed in building the aquaponics greenhouse, which contains two 610 gallon fish tanks, a 1,000 gallon managed wetland, and a table with a flush and drain system that will be used for growing hot house vegetables.

Some of Williams’ coworkers also took an interest in the project. “We went home and looked it up online, read books about it, and discussed it with people who might know about it,” Williams says. “Although we might not have had the proper training to create a facility like that, we put our minds together and put our passions together and went after the project.”

Williams got so invested that he’s still working on the green house. Aprovecho has employed him for the last few months to get the system ready for the arrival of tilapia in two or three weeks. When the fish arrive, Williams will get paid to manage the system. “It’s going be a full time thing, just like managing my aquariums, but on a larger scale.”

Williams doesn’t think he’ll work at Aprovecho forever, but he’s excited to work on the aquaponics system. “I see this experience helping me gain the experience I need to create this kind of setup for myself and help other people create these setups,” Williams says.

Williams is also looking into the possibility of breeding tilapia at home in his aquariums to sell to Aprovecho. “It costs a lot to stock fish. I’d be helping them out by cultivating these fish.” He’s also interested in designing a class on aquaponics, which could be part of Aprovecho’s curriculum.

Williams is also sharing his newfound knowledge with his family. He helped his mom build a rainwater catchment system to water her gardens, and he got his 18-year-old brother excited about green technologies. Williams’ brother will be attending Columbia Gorge Community College’s wind turbine program in the Dalles, Oregon next term.

“This is having a larger effect on my life than I expected it to when I started,” Williams says. 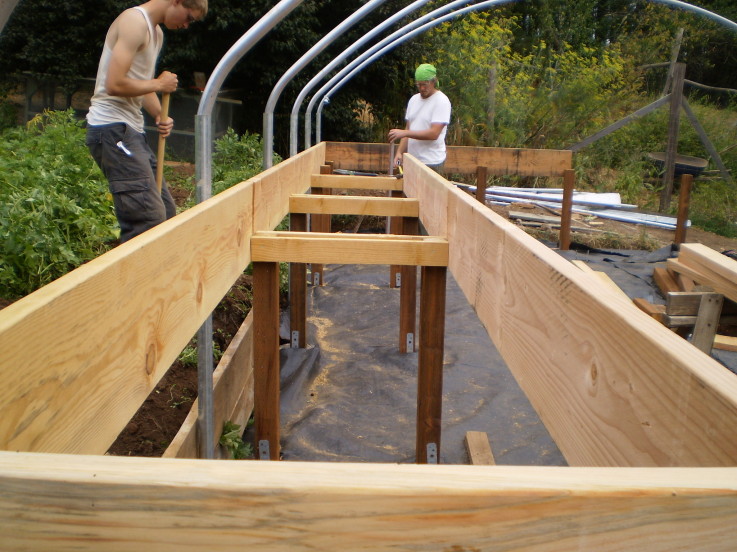 The South Lane School District says that the Workforce Investment Act jobs circulated approximately $65,000 back into the local economy, and Aprovecho is benefiting from the program.

“The WIA summer jobs program was a huge boon to Aprovecho’s campus development,” says Jeremy Roth, who coordinated the projects for Aprovecho. “It allowed us to capitalize some really forward thinking projects that we otherwise wouldn’t have been able to make happen.”

The workers gained valuable green-building skills, which will hopefully give them an edge in what the Obama Administration calls our “new green economy.” And they aren’t the only ones who learned from the projects. The U.S. Department of Labor honored South Lane School District as an example of an exemplary “best practices” summer work program and invited Williams to the Recovering America’s Youth Summit in Dallas, Texas last December to give a presentation on the Aprovecho projects.

As for Williams, the summer was life changing. “It was a passion for me working with aquariums and dealing with fish, but I now realize it can be more than just a passion,” he says. “I can actually combine productivity and working with something I enjoy doing. It’s given me hope that there’s a job out there that’s perfect.”

Working at Aprovecho, which is a non-profit collective, also made Williams a tiny bit more optimistic about the future.

“Without sounding corny, I see Aprovecho as a shining light of hope. Maybe people can come together and be civilized without the ‘needs’ of modern civilization,” Williams says. “We don’t need everything that society tells us we need. We pretty much just need each other.” 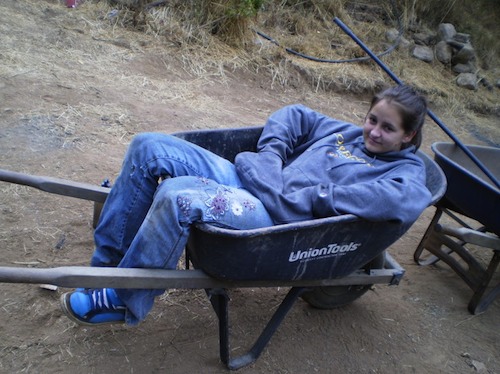