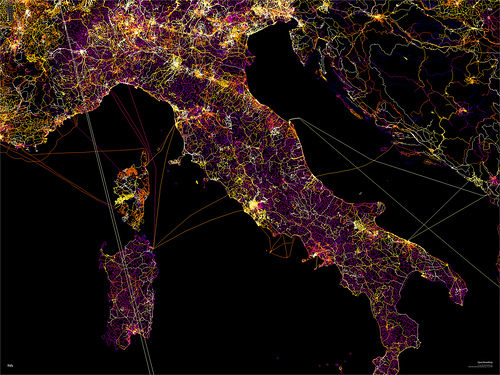 OpenStreetMap is an open data project that's peer producing an editable map of the world's streets. Anyone can contribute data and use the data under a Creative Commons license. There all kinds of possible uses of the data for the common good – resource mapping, disaster response, transit optimization, and as the basis for new low cost commercial services. The below is an animation of data submissions during 2008:

I'm amazed by the progress of this project since inception in 2004. According to Wikipedia, there are 100,000 active users (as of March 2009) and 5,000 active contributors (as of August 2008). A number of commercial and government entities have donated significant chunks of data. And on top of it, progress is likely being accelerated by widespread adoption of smartphones with GPS functionality, which increases the number of potential geospatial data contributors to the project.

This is an incredible resource created by volunteers freely available to anyone who can get on the Internet. And is one of a growing number of reason to be hopeful about the future. Yes, our times are defined by crisis, but also by the emergence of spectacularly successful forms of mass collaboration that give hope that even our toughest challenges can be met by working together for the common good.