Amsterdam is known for many things: its historic architecture; its extensive canal system; its vibrant nightlife; and, yes, its red-light district and "coffee shops." Now the Dutch capital hopes to add another item to the list—sharing. As of February 2nd, Amsterdam is Europe's first named "Sharing City." The product of over a year of research and coordination, Amsterdam Sharing City brings together government officials and community stakeholders (including conventional businesses as well as sharing startups) to explore the opportunities and challenges presented by the sharing economy.

Amsterdam was poised to become a leader in the sharing movement even before its official designation as a "Sharing City." The municipality is home to a number of successful sharing businesses, including the borrowing platform Peerby. Some of its larger banks and insurance companies, in addition, have begun dipping their toes into the sharing-economy pool. The local government—the first in the world to develop regulations for Airbnb rentals—has consistently demonstrated a willingness to work with sharing startups toward integration with the regular economy. The capital city boasts extensive digital infrastructure and a citizen base that knows how to use it. Finally, its local business community is already strongly networked, and its compactness lends itself to neighborhood-based initiatives.

The sharing-economy knowledge and networking platform shareNL laid the groundwork for Amsterdam Sharing City, beginning with a 2013 survey of 1330 city residents. Buoyed by the results—over 84 percent of respondents indicated willingness to take part in at least one type of collaborative consumption—and with other municipal sharing programs (like South Korea's "Sharing City Seoul" project) in mind, shareNL approached the Amsterdam Economic Board for permission to write a white paper on Amsterdam's potential as a sharing city. In January 2014, while writing the report, they organized a roundtable session on the topic with municipal officials, local business owners, representatives of the national government, and outside experts on collaborative consumption. Originally planned for September of last year, the official launch was postponed until after elections for city council. "This also gave us more time to get everyone in and around the city aligned," observed shareNL's Harmen van Sprang in an email interview.

The key to Amsterdam Sharing City—besides open communication and cooperation with local government—is a network of ambassadors and community stakeholders who will work together on concrete projects related to the sharing economy. "We believe a Sharing City should be a collaboration between all stakeholders…who are affected by the rise of the sharing economy," explained van Sprang. "Not only the municipality and the sharing economy companies, but large corporations, community centers, and social impact organizations." Amsterdam Sharing City's list of more than thirty ambassadors includes Amsterdam Public Library, Amsterdam Smart City, law firm Kennedy Van der Laan, management consulting company Accenture, and Shareable's own Neal Gorenflo. 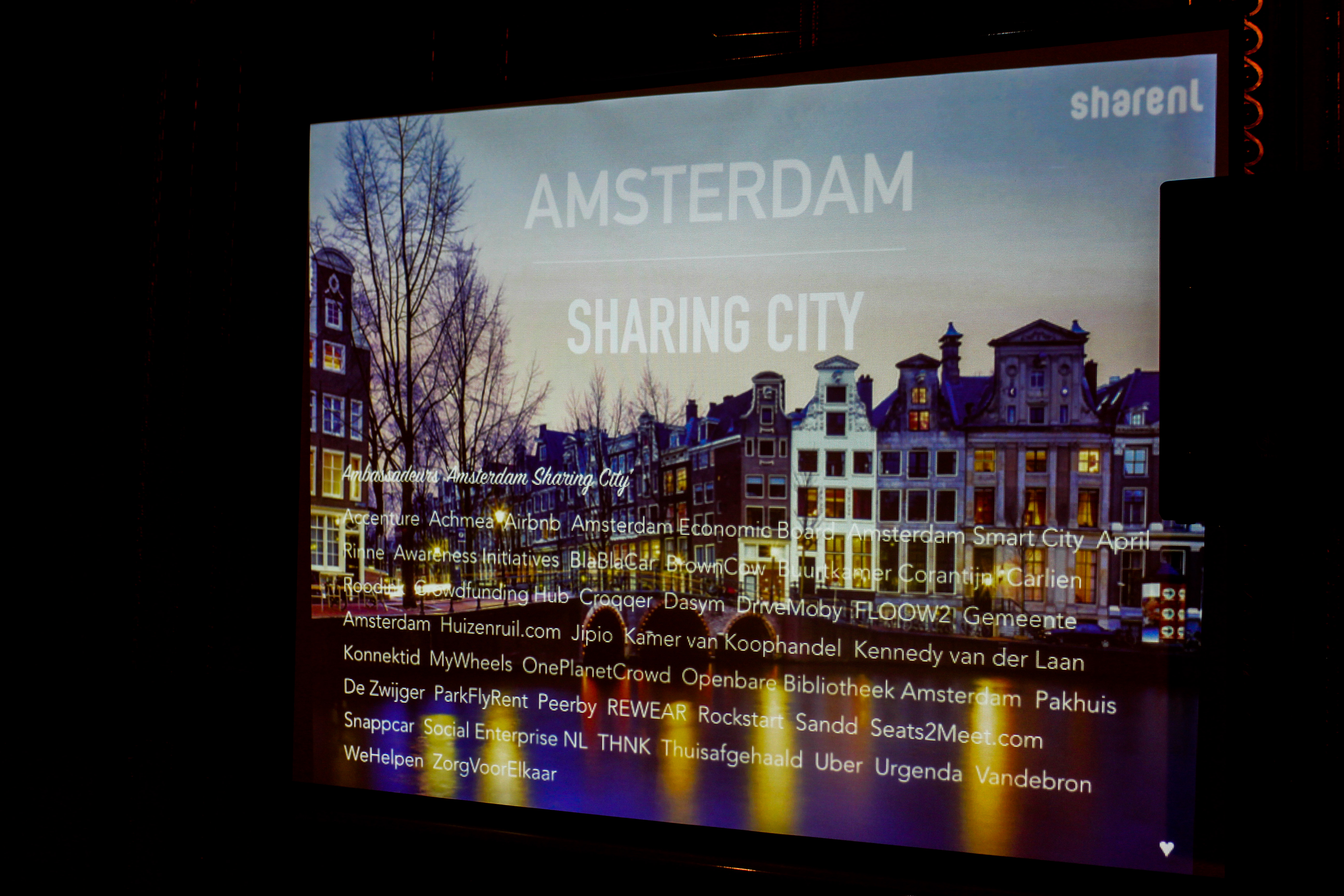 The core of the Amsterdam Sharing City program is its network of ambassadors. (Henrietta Pritchard-Barret)

Amsterdam Sharing City is still in its infancy, but van Sprang is optimistic about its potential to help Amsterdammers navigate the broader technological, environmental, and social changes already underway. Through a series of (to-be-determined) concrete projects, ambassadors will build "playgrounds" for the sharing economy, experimental spaces within which the promises of sharing can be realized—and within which, as well, pitfalls can be identified and addressed head-on.

The very existence of Amsterdam Sharing City constitutes its first successful test. After all, if such a diverse group of civic leaders can come together around the significance of the sharing economy to Amsterdam's future, surely a broader commitment to collaboration is not out of the question. 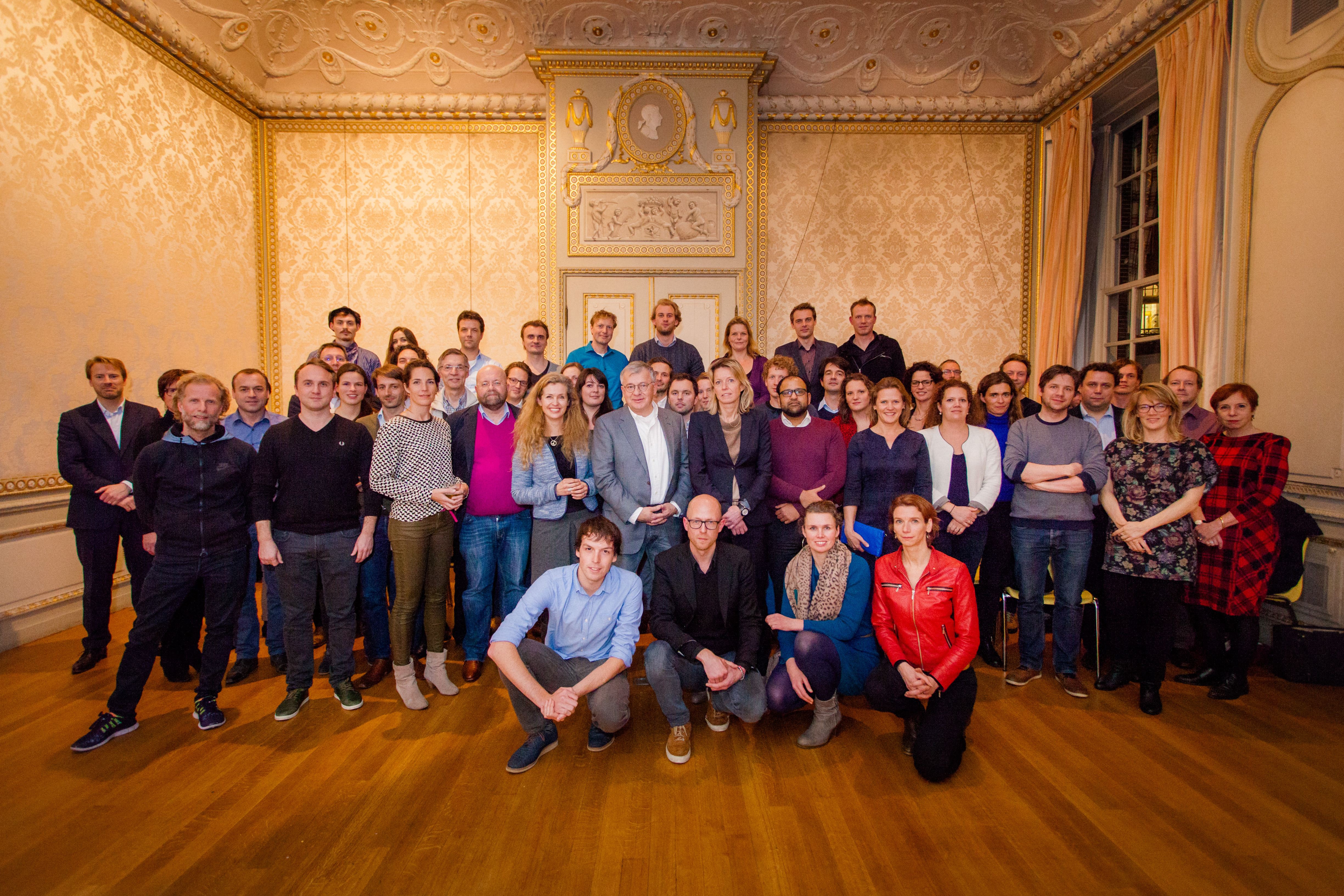