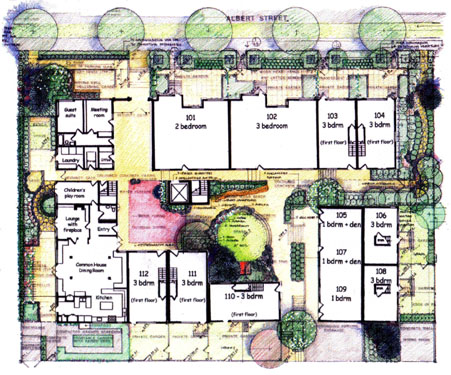 Neal Gorenflo|October 12, 2009August 5, 2019
Last Friday I went to a site visit for a yet-to-be-built cohousing project near downtown Mountain View where I live in Silicon Valley. I was pretty excited about the project. My wife and I have been pursuing cohousing for a few years with no luck. One obstacle for us, and for anyone who pursues cohousing, is the often long and uncertain development process. Most cohousing groups fizzle because they need a critical mass of qualified buyers and a suitable plot to come together at the same time. These stars do not readily align.
This project, however, had two big things going for it. The core group had already acquired a plot near downtown, a minor miracle in itself. They had also hired author and architect Chuck Durrett, one of the leading cohousing designers in the US. Chuck was in town for the site visit and to promote his second book on cohousing, Senior Cohousing.
The site visit was first thing Friday morning. The one-acre plot was what remained of an old walnut orchard, a rare remnant of Silicon Valley’s agricultural past. The 10 or so people there were walking the property or talking in small groups around a card table in front yard with some bottles of tea, Chuck’s new book, and a sign up sheet for the group. The local ABC affiliate was shooting an interview with one of the organizers. It was an odd, yet friendly assembly.
I had a couple of pleasant conversations before I found one of the organizers, David. My first question was about affordability. Here’s what I learned from David; because the city mandates that there must be 2.3 parking spaces for each household, their plans included underground parking, which will account for 15% of the project’s total cost.  Because of the added cost, the group increased the average size and thus selling price of units to make the project financially feasible. This pushed the price to a level we may not be able to afford.
Cue the outrage. We’d just been displaced from our dream community by cars!
Above ground parking was an option, but that would take up an inordinate amount of the plot. They needed 46 parking spaces for a one-acre, 20-unit development. This was unacceptable to the core group who want plenty of open space, especially for gardening.  I share their appreciation for open space, so accept this priority though it means we may not be able to participate.
This was a sobering lesson in the cost of car dependency and the interplay between transportation choices, housing affordability, open space, and access to fresh food.  It was a reminder that we need to think of them as interdependent variables, and that our choices involve tradeoffs. This experience showed me how much we prioritize cars in the US and what it costs us in quality of life.  And through it I recognized how strong my preference is for affordable housing, open space, and fresh food over car ownership.
This situation also got me to thinking about combining cohousing with carsharing as a solution for the Mountain View group.  It might work because many prospective buyers are retired thus do not have regular commutes. Most carsharing services are patronized by similar ad hoc users where the driver-to-car ratio is as high as 20-to-1.  The Mountain View group could cut the cost of the project by around 7% with a ratio as rich as 2-to-1. However, the group would have to incorporate a carsharing system in their plans and get the city to accept it in place of the standard parking requirements. The former is getting easier thanks to services like Divvy Car, but the latter would be an arduous process and delay the project.
I also began to see the potential of combining senior cohousing and carsharing. Much of the cohousing being built in the US is senior cohousing and is suburban or rural so doesn't face the same challenge as the Mountain View group. Seniors are attracted to cohousing as a way to "live independently through community” and forestall assisted living. With 75 million baby boomers approaching retirement, senior cohousing is poised to bring cohousing into the mainstream. Wouldn’t it be wonderful if senior cohousing groups included carsharing in their community plans as a few cohousing groups are already doing? It could decrease the cost of living and increase quality of life for those involved thus attract more people to both solutions.
Stay tuned for more about my adventures in cohousing.  My wife and I may find a way to make it work.  And please share any resources about combining cohousing and carsharing in comments.