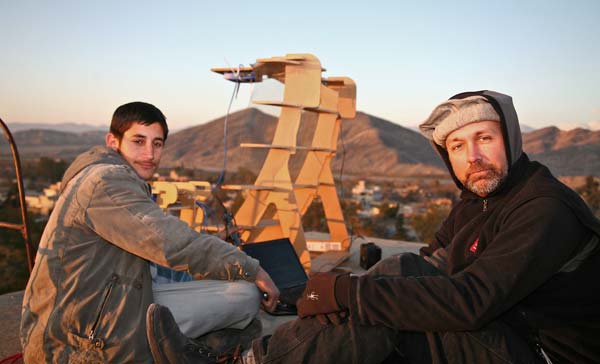 In light of events that occured in the Middle East earlier this year, many worry that in the future, rogue governments could cut off access to the internet as a way to control political “threats.”

Douglas Rushkoff has championed the idea that the current corporate-controlled internet is far from the open commons we pretend it is.

“If we have a dream of how social media could restore peer-to-peer commerce, culture, and government, and if the current Internet is too tightly controlled to allow for it, why not build the kind of network and mechanisms to realize it?” Rushkoff asks.

Funded primarily by the personal savings of group members and a grant from the National Science Foundation, residents of Jalalabad have built the FabFi network: an open-source system that uses common building materials and off-the-shelf electronics to transmit wireless ethernet signals across distances of up to several miles.

Jalalabad’s longest link is currently 2.41 miles, between the FabLab and the water tower at the public hospital in Jalalabad, transmitting with a real throughput of 11.5Mbps (compared to 22Mbps ideal-case for a standards compliant off-the-shelf 802.11g router transitting at a distance of only a few feet). The system works consistently through heavy rain, smog and a couple of good sized trees.

With FabFi, communities can build their own wireless networks to gain high-speed internet connectivity—thus enabling them to access online educational, medical, and other resources.

In FabLabs, technology brings people and ideas together. FabFi embraces this same principle. The public hospital, which houses the endpoint of FabFi Afghanistan’s longest link, has become a shared community resource, providing downlinks to a growing number of locations in the city center.

The shared infrastructure facilitates communication between FabFi users all over the city as they collaboratively grow and maintain the network. The FabFi user group is learning valuable skills that will soon allow them to generate revenue for themselves and the Lab by building, installing and maintaining FabFi links as part of a “FabFi Club” at the FabLab.

Fast Company reports that residents can build a FabFi node out of approximately $60 worth of everyday items such as boards, wires, plastic tubs, and cans that will serve a whole community at once. While it sounds like science fiction, FabFi could have important ramifications for entire swaths of the world (including rural America) that lack conventional broadband.

Although the Netherlands recently became the first country in the EU to pass a comprehensive Net Neutrality law, the United States and other Western countries are dragging their feet. But why wait?

If they create their own internet in a war torn country, what’s our excuse?