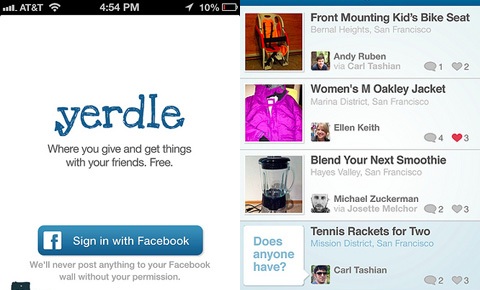 Adam Werbach has been on the cutting edge of the environmental and sustainability movements for two decades. His latest venture, yerdle, combines those passions in a service designed to motivate ordinary people to share instead of shop. Yerdle officially launches today, on Black Friday, the biggest shopping day of the year, to call attention to the advantages of sharing over shopping. Below is an interview with Werbach exploring why he’s launching yerdle, the community strategy he’s innovating, and what he hopes to accomplish in the long run.

Neal Gorenflo: You were elected as the youngest-ever president of the Sierra Club in 1996 at the age of 23; in 2004, you wrote a highly controversial essay arguing that the environmental movement was dead; in 2006, you sparked even more controversy by accepting a role to lead Walmart’s sustainability efforts; and now, you’re launching a general item sharing platform called yerdle on the biggest shopping days of the year, Black Friday. I sense a pattern in your career trajectory. What’s going on here?

Adam Werbach: We’re not moving far enough fast enough to enable 10 billion humans to live on the planet, and I guess I’m impatient. Grist just published an article that said that if you’re 27 years old or younger, you’ve never experienced a colder-than-average month. That’s climate change, and that’s the reality we live in. We need organizations like the Sierra Club, Greenpeace, 350.org, and World Wildlife Fund to sound the alarm and push for political change. We also need big companies to do their part — to make more sustainable products and support policy changes.

But we also need a third component: We need to radically change the way we acquire the things we want. The model where everyone owns one of everything is badly broken. I’ve spent the last eight years of my life helping companies make better, more-efficient, less-polluting products. Now we need to start getting more utility out of those products once they’re produced. Renting can work for strangers, but sharing is the way friends make efficient use of the things they own. The moment now is to use software, technology, and good old-fashioned community organizing to make sharing ubiquitous.

Adam Werbach: We need to go way beyond the environmental movement. My colleagues and friends in the environmental movement are the first to share a backpack or host a potluck or carpool. There’s a much larger group of people, roughly 30 percent of the U.S. population, who are willing to pay extra and go out of their way for a healthier, greener product, from Fair Trade Coffee to non-toxic household cleaners. Our goal with yerdle is to go to even wider. We want to reach the audience of people who make their decisions primarily on price and convenience. We want the Target or Walmart shopper to check out yerdle before they go to the store.

Neal Gorenflo: I “checked out” of holiday shopping seven years ago, so I understand a little bit about why you’d launch yerdle on Black Friday. But sharpen the picture for us… what is the cultural and economic significance of Black Friday? And why should citizens try something different?

Adam Werbach: Black Friday is traditionally the day when retailers start making money for the year — they’re in the ‘red’ until Black Friday. It’s the busiest shopping day of the year. And it’s fun for the people who participate. We’re not out to make people feel bad about the deals they’re getting; we’re out to show there’s a better way. Black Friday lays bare the flawed economics in retailing today. Stores compete to lower the price on hot items in the hopes of earning customers who will fill up their carts with higher margin items. They typically call these items ‘loss leaders’. But, because of the ease of finding the lowest price, customers are shopping around and just plucking up the lowest price items. That’s good for the customer and bad for the retailers.

The Story of Stuff Project’s video about on Black Friday.

Kelly McCartney: After beta testing in San Francisco, you’re launching yerdle nationally today in hopes of turning shoppers into sharers. How do you see that playing out? And how do new “yerdlers” get into the game?

Adam Werbach: We’re super-excited to open our doors and welcome new folks. Come poke around and share something.

We’re still just a baby, so we need everyone’s help and forgiveness as we work out the kinks, but the best thing to do is to log on and start sharing some items with your friends. It’s key for folks to remember that these aren’t strangers you’re sharing with; these are your friends. We’ll still require that you have enough friends on yerdle so that you’ll have enough free items to make it a great experience.

Kelly McCartney: Traditional economists might argue with your “Why shop when you can share?” motto as antithetical to pulling the country back into the black. How does the long tail of sharing make more sense in the bigger economic picture?

Adam Werbach: Sharing is a more economically productive way to support the economy than shopping. The dollars you save you’ll spend in your community, or invest in a higher quality purchase. Repairing items adds local jobs. Delivery and transportation of shared items are chances for local employment, as well. The challenge for our economy is to make each ounce of natural resources used more economically productive. Tools like yerdle help us do that.

Kelly McCartney: While yerdle is described as a sharing platform for friends, it seems one of the bonuses is meeting like-minded people nearby that you might not otherwise meet. What role does community play in your strategy? And what’s your favorite story of how yerdle has brought people together?

Adam Werbach: That’s spot on. We’re building out yerdle one person at a time through community organizing. Our campaign director is Rachel Shiozaki, who comes to us from 350.org and Green Corps and she’s helping to coordinate the ‘pollinators’ for yerdle. Pollinators are people who are sharing advocates who want to help build their sharing circles and bring other people into sharing. We’re also hosting dozens of sharing shindigs across the country. Folks can email her at Rachel@yerdle.com if they want to help us pollinate.

We’re chock full of great stories at yerdle. Last week, my kids yerdled some lemons from our neighbors Pat and Dan so they could do a lemonade stand for victims of Hurricane Sandy. They yerdled a table from Ken, who owns a store on Cortland Avenue, and he let them set up the stand in front of his business. Another neighbor yerdled us the pitchers. Instant lemonade stand. All we had to pay for was the sugar. 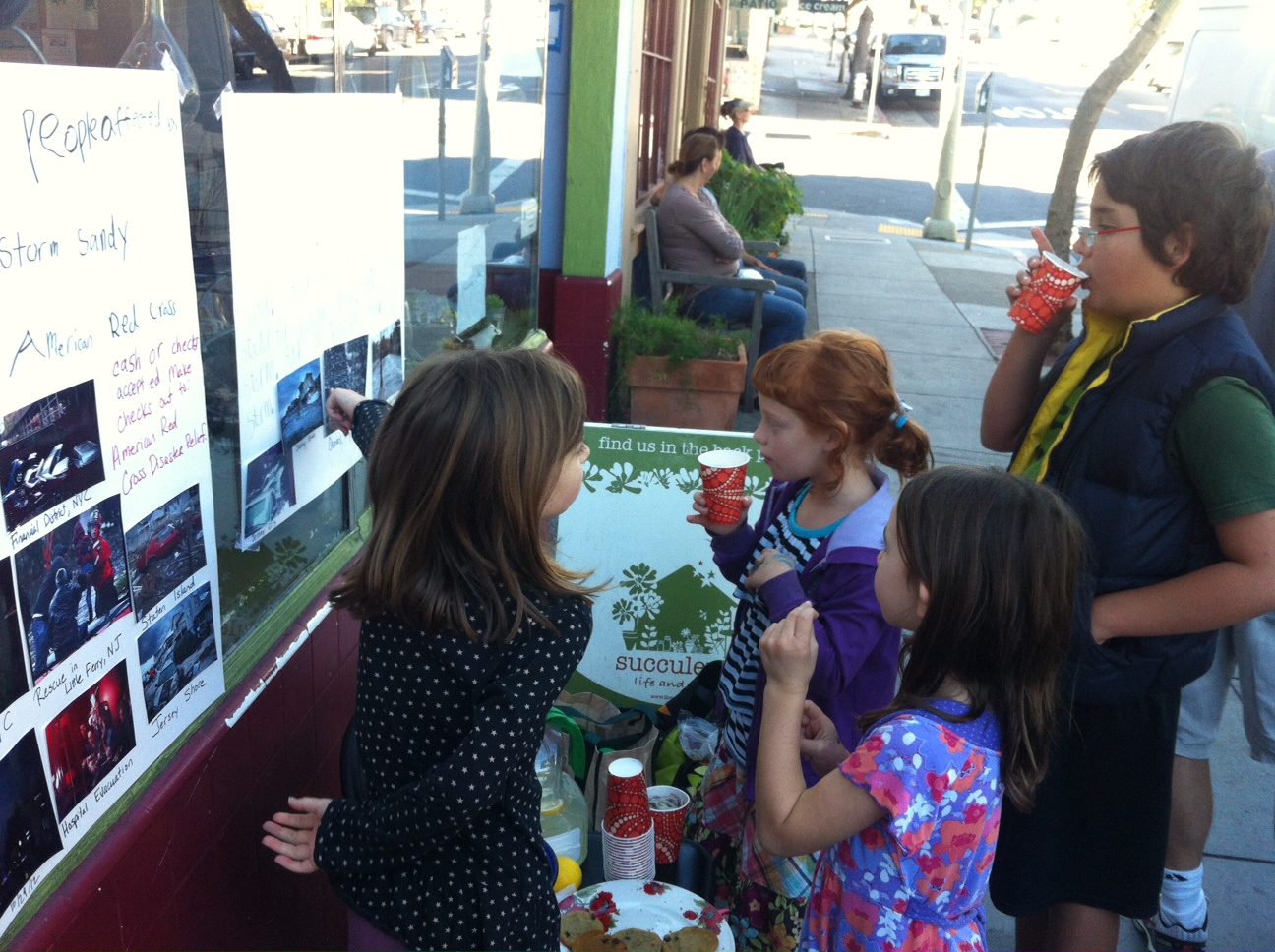 Neal Gorenflo: You’re entering a daunting space. While services like Airbnb race ahead, no general item sharing sites have gotten serious traction. Neighborgoods, Rentalic, Share Some Sugar, and more have flamed out or continue to struggle. Some say that there’s not enough financial incentive to share the small stuff. What are you doing differently to avoid the fate of these predecessors?

Adam Werbach: We’re huge fans of those who have come before us — they’ve inspired us and we all owe them our thanks and respect. The time is right for sharing now. We’re building yerdle to use Facebook for its highest purpose and we’re relying on new mobile technology that wasn’t available even a few months ago. But beyond that, an increasing number of Americans are buying things online and they should be able to share things that way, as well.

Our head of engineering, Carl Tashian, was on the founding team of Zipcar and he reminds us that, when ZIpcar was getting off the ground, people said that sharing cars would never work. People thought that Amazon.com would never be able to sell books online. And the idea that a billion people would be linked together on a single social network seemed crazy until Facebook made it real. New ideas are hard, but I’ve got a lot of faith in the team we’ve brought together. The first few pollinators — the people spreading the word — are inspiring to me. Cesar Chavez said that the only way to build a movement is one person at a time. So here we go!