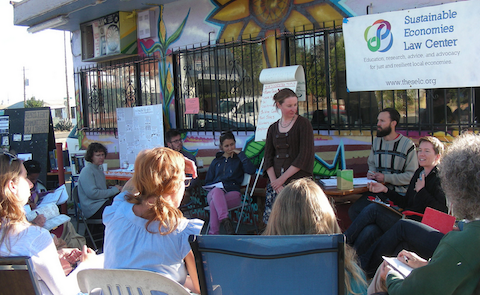 This is the first installment of Profiles in Sharing, an ongoing Shareable series featuring thought-leaders and change-makers in the sharing economy.

I’m sitting in a cafe in downtown Oakland, just up the block from a HUB coworking space and a stone’s throw from a BART station. The wooden tables are full and sharing them is the norm. Against the wall, people are sitting at repurposed school desks and behind the counter is a barista with a hat that says “Oakganic.”

I’m meeting with Janelle Orsi, a Bay Area attorney specializing in the sharing economy. Once known as the Sharing Lawyer, Orsi now describes herself as a Sharing Economy Lawyer because people thought “sharing lawyer” was a joke; a parody of hippie lawyers. Now that people know what the sharing economy is, she’s started using it in her title, but she says people immediately think she’s a lawyer for big companies like Airbnb.

“The media, when they define the sharing economy, is often narrowly focused on technology-enabled sharing,” she says. “Most of the sharing that I work with is local, neighborhood-based so the title Sharing Economy Lawyer gives the wrong impression, but it’s taken more seriously.”

Semantics aside, Orsi, in a nutshell, works with cooperatives, nonprofits, social enterprises, cohousing communities, ecovillages and more to create sustainable communities. She’s also an author and cartoonist. She smiles a lot, radiates authenticity and makes you wonder how she does everything she does. She says her goal is a 30 hour work week then adds, “I’ve gotten so good at it that I do two of them.”

Before her career in law, Orsi was living in Los Angeles County working with programs focused on social justice. She had a commitment to making a difference in the world but wasn’t sure what she would do. Being gay, she empathized with people, especially youth, who felt like outsiders but she realized that in having college-educated parents and a college education she had opportunities that others didn’t. She was working with youth but felt helpless to make a difference in their lives as they dealt with issues including arrests, police harassment, and a lack of healthcare.

Her mom suggested going to law school. Orsi applied and was accepted at UC Berkeley. She went in thinking she would work on youth-related policy but halfway through her time there she changed course.

“I realized that fighting an adversarial system was always going to be frustrating,” she says. “It brought out the worst in me in terms of stress and depression. I was constantly protesting things and going up against school districts. I didn’t have a strong feeling that it was what I wanted to do.”

SELC teach-in on urban agriculture and the law. Photo by Ricardo Nuñez

“I looked at what they’re doing and thought that I could make a big difference as a lawyer if what I do is focus on facilitating the growth of organizations like that,” she says. “Rather than fighting the system, I wondered what kind of organizations I could create that would empower people.”

Orsi decided she would be a transactional lawyer and draft paperwork for organizations. Then one evening during law school she was thinking about what her law practice would look like and she latched onto the word “sharing.” She thought about all the ways sharing had empowered her and allowed her to live more cheaply and more sustainably.

“I began thinking about youth again,” she says. “Thinking about what their future looks like; wondering how they’re going to house themselves and get jobs and feed themselves.”

She realized that teaching people how to share, inspiring people to share, and providing legal assistance with sharing could be a way to devote her entire career to making things better.

“At that moment,” she says, “I decided to start a law practice and call it sharing law.”

As a sharing lawyer, Orsi thought she would write agreements and form organizations. She quickly realized however, that her clients were continually running up against legal barriers that were too high and too difficult for people to navigate.

In go-getter fashion, Orsi co-founded, along with attorney Jenny Kassan, the Sustainable Economies Law Center (SELC) for the purpose of trying to break down some of the legal barriers and to analyze the barriers in order to help people navigate them.

Without a clear path on how to set up sharing entities, Orsi says that people are less likely to try. Her thinking was, if she created sample agreements and organizational documents, people would be more inclined to move forward. She co-authored a book, The Sharing Solution: How to Save Money, Simplify Your Life and Build Community, which was full of sample agreements for everything from sharing food and tools to caregiving, cohousing and buying land together. She says it was a “build it and they will come” approach. 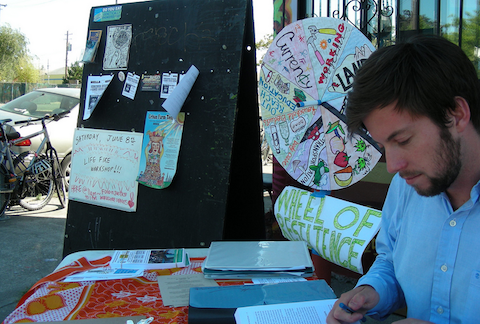 SELC law student intern Matt Read and the Wheel of Resilience, a tool designed to prompt discussion about the various areas we can create resilience in our lives. Photo by SELC.

According to Orsi, when people are setting up sharing entities and they come across legal hoops that are so overwhelming they decide they can’t do it, that’s a signal that we need to change the law and create exemptions.

This is where SELC steps in. The organization’s approach to changing laws is to look at where regulations are too burdensome and to create exemptions from those regulations for smaller scale businesses and less risky activity.

Earlier this year, SELC was successful in getting the California Homemade Food Act (AB 1616) passed. The law creates a new category of food production called a cottage food operation that can be operated out of a home kitchen. This allows people to make and sell foods that don’t require refrigeration, including breads, dried fruit, candies and more, from home.

SELC is also working on a two year bill called the Neighborhood Food Act, which will remove a lot of barriers to selling urban-grown food.

In most cities right now, anybody who grows food in their backyard and tries to sell it is going to run into multiple legal barriers from their local planning department, homeowner’s associations, the landlord, and the health department and agriculture department. SELC wants to change that by clarifying any grey areas that exist and putting a mandate in place that says people can’t be blocked from growing food. 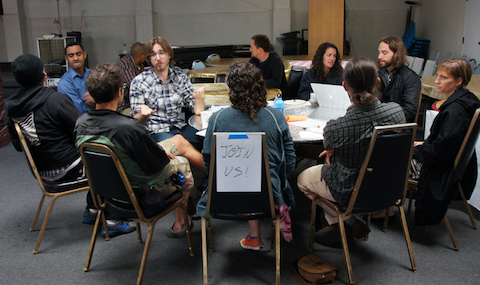 Participants in SELC's Think Outside the Boss workshop on how to form a worker cooperative. Photo by Chris Tittle

While she initially felt like “one lone nut,” these days, sharing lawyers abound. Orsi’s second book, Practicing Law in the Sharing Economy: Helping People Build Cooperatives, Social Enterprise and Local Sustainable Economies, lays out the primary areas a lawyer needs to know to work in the sharing realm.

In general, Orsi feels that a sharing economy that is more dispersed, more localized will be more viable.

“Anytime a sharing activity scales up,” she says, “it’s going to run into the realm of a commercial activity. It’s going to start looking like a commercial enterprise of the sort that is subject to regulation.”

She says that the same story comes up over and over again: people are sharing and they, all of a sudden, run into employment laws and health and safety laws.

“We need to begin to unravel that,” she says. “We need to start drawing boundaries around what is the sharing economy and should be allowed, what is a small-scale business, and when it should be exempt.”

Orsi says that if SELC had all the time in the world, they have a long list of laws they would change but, for now, they’re “just chipping away at a few more per year.”

Among the SELC team, respect for Orsi is palpable.

“She’s very good at empowering people to offer their own skills and gifts, but she does it in a way that she’s just guiding you rather than giving any firm direction,” says Chris Tittle, Director of Organizational Resilience. “She’s very grounded and at the same time has this great vision of the world she wants to create.”

Legal Services Program Director Ricardo Nuñez echoes the sentiment. “The things she’s doing, and what we’re able to produce through SELC, are such small steps,” he says, “but they’re so revolutionary.”

In her ideal society Orsi would see that anyone who needed anything could look around their city and get plugged into some sort of cooperative, nonprofit or local sharing arrangement. She would also emphasize a move away from prioritizing money.

“I would hope,” she says, “that people would stop spending so much of their lives trying to make so much money so they can buy a house and 2.3 cars and fill their house with everything they could possibly need.”

Then she adds, “People become really boring when they strive for that kind of wealth.”

Here is one of Orsi's cartoons. See more at TheSELCTube.