A New Era: From Occupation to Workers' Control - Shareable
Skip to content 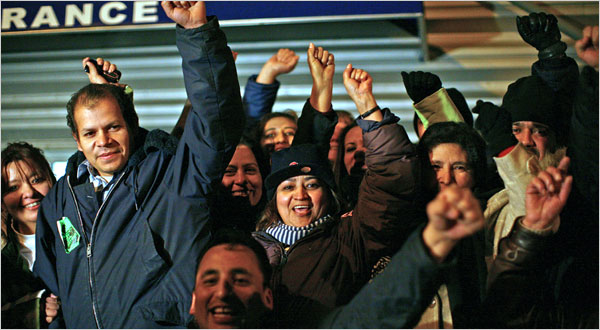 This week, Strike Debt tweeted out triumphantly: “It’s a new era. First machine fired up at worker owned factory. #NewEraWindowsandDoors”. For those of us who’ve been following news about the Chicago factory formerly known as Republic Windows and Doors, this was the culmination of years of struggle. It’s an exciting moment, and a victory which hopefully can inspire other factories across the country.

Though the factory had been making windows and doors since 1965, our story starts in 2008 with the financial crisis and the actions of Bank of America. Despite having received billions in tax dollars, Bank of America (and other major banks) spent much of 2008 cutting off struggling small businesses or businesses with low returns—not because they couldn’t afford to lend to them, but to improve their balance sheets. Republic Windows and Doors lost their credit line in late 2008 (just a few days after BOA received $25 billion in bailout money) and summarily fired their 250 workers in three days, without either the 60 days notice or the 60 days severance required by the WARN act.

A common story, perhaps, but at Republic Windows and Doors the workers didn’t acquiesce. Instead, in December of 2008, they occupied the factory for six days, bringing major national news coverage, and won their severance. It’s important to remember that in 2008, occupation was seen more as a labor action from the 30s then a common tactic for protest on the left.

In February 2009, the plant was purchased by Serious Energy, and reopened, with many of the workers returning to their previous union contracts. It seemed like a major victory, and things went well at the factory for a time. But then, in February of 2012, sudden closure was again announced, this time by the new bosses. Once again, workers rallied to the factory, this time with a big wave of support from Occupy Chicago, and though their occupation only lasted 11 hours, they won fair severance pay once more.

But now, rather than wait for another boss to just repeat the cycle, the workers are taking control of the factory. In May of 2012, they incorporated as a democratically run worker-owned cooperative, and they’ve begun purchasing the machinery in the factory bit by bit. They have the support of their union, the United Electrical Workers, as well as the micro-finance solidarity economy organization Working World.

There are massive challenges facing any worker owned cooperative, particularly in the beginning, as raising capital and buying the factory and machines can be quite difficult. With the first machines running, the appropriately named New Era Windows and Doors company is on the right track. In this period of leveraged buy outs and union-busting, they stand as an inspiration to other workers, showing how to bring democracy and worker power into the factories.