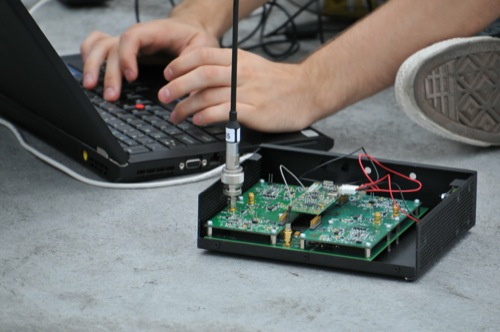 Shareable recently covered a group of residents of Jalalabad, Afghanistan who built their own open-source wireless network from junk and everyday household items. For the less-industrious yet DIY-inclined, the Village Base Station (pdf) is a low-power, easy to deploy tool developed by Berkeley professor Kurtis Heimerl to create a GSM cellular data network in areas with limited power and network resources. MobileActive recently got their hands on a prototype and tested it in a large American city, and the results were promising. In a post about the experiment, they note the benefits of the Village Base Station:

…ﬂexible off-the grid deployment due to low power requirements that enable local generation via solar or wind; explicit support for local services within the village that can be autonomous relative to a national carrier; novel power/coverage trade-offs based on intermittency that can provide bursts of wider coverage; and a portfolio of data and voice services (not just GSM).

Heimerl goes further into the technical details in this video:

Potential uses are numerous: individuals in rural areas with limited Internet access would benefit from these pop-up cellular data connections, and it could serve as a game-changer for areas of the developing world with limited network access. Moreover, tech like this could play a role in the autonomous Next Net that Douglas Rushkoff envisions. While the Village Base Station uses existing cellular network infrastructure, what if devices like this were used to connect to an autonomous Internet through a collectively-owned satellite?

The notion isn’t that far-fetched. Buy This Satellite is an effort to crowdfund enough money to purchase the communications satellite TerreStar-1. Non-profit Ahumanright aims to use the satellite to provide free Internet access in the developing world. Though creating an autonomous Next Net is not in Ahumanright’s game plan, what if a similar project connected the nodes and built a decentralized Internet available anywhere in the world?