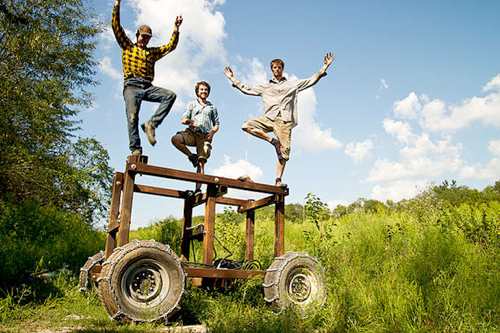 Bringing together farmers, engineers and industrious DIY’ers, Open Source Ecology is an effort to build low-cost, sustainable and self-contained machines that could build and power a small-scale society. In their words, the team is devoted to lowering “the barriers to entry into farming, building, and manufacturing and can be seen as a life-size lego-like set of modular tools that can create entire economies.” It’s a bold pitch, but the team has already developed a collection of tools that could move mountains, both literally and figuratively.

Open Source Ecology’s primary project is the Global Village Construction Set (GVCS), an open-source project to develop a wide variety of industrial machines. With plans for 50 machines that include a 3-D printer, backhoe, bakery oven, and even a bulldozer and cement mixer, the GVCS aims to make industrial machinery as open as freeware software, at a cost that the developers estimate, on average, will be eight times cheaper than comparable machinery on the market. The team has developed prototypes of nine machines, including the power cube, a self-contained power unit, and the LifeTrac, a full-sized four-wheel-drive tractor. In their words:

A modern, comfortable lifestyle relies on a variety of efficient Industrial Machines. If you eat bread, you rely on an Agricultural Combine. If you live in a wood house, you rely on a Sawmill. Each of these machines relies on other machines in order for it to exist. If you distill this complex web of interdependent machines into a reproduceable, simple, closed-loop system, you get [the GVCS]. 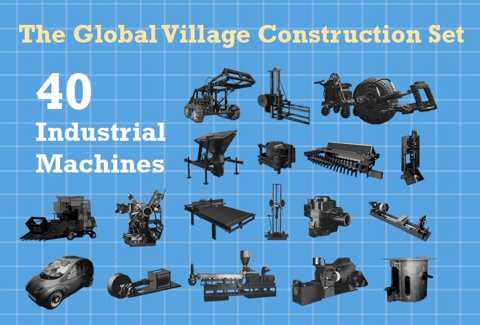 The GVCS includes most of the tools a small society would need to go off the grid. But the project is not only for industrious DIY’ers–the machines could transform the developing world. Following a 12-part set of guiding principles, the GVCS project is focused on developing low-cost and modular machines that are user-serviceable and enable an efficient, closed-loop manufacturing system. The machines within the GVCS present developing nations with low-cost solutions to development issues, while also empowering communities to build and maintain the tools that they will be using.

The following two-minute video gives a quick overview of GVCS:

Talking about this seemingly herculean effort is one thing, but Open Source Ecology is putting their bold idea into practice. The Factor e Farm in Missouri has been established as a testing ground for the project’s plan to build a self-contained, sustainable society using the GVCS. Life on Factor e Farm is well-documented on Open Source Ecology’s video page, including clips of the farm in production: