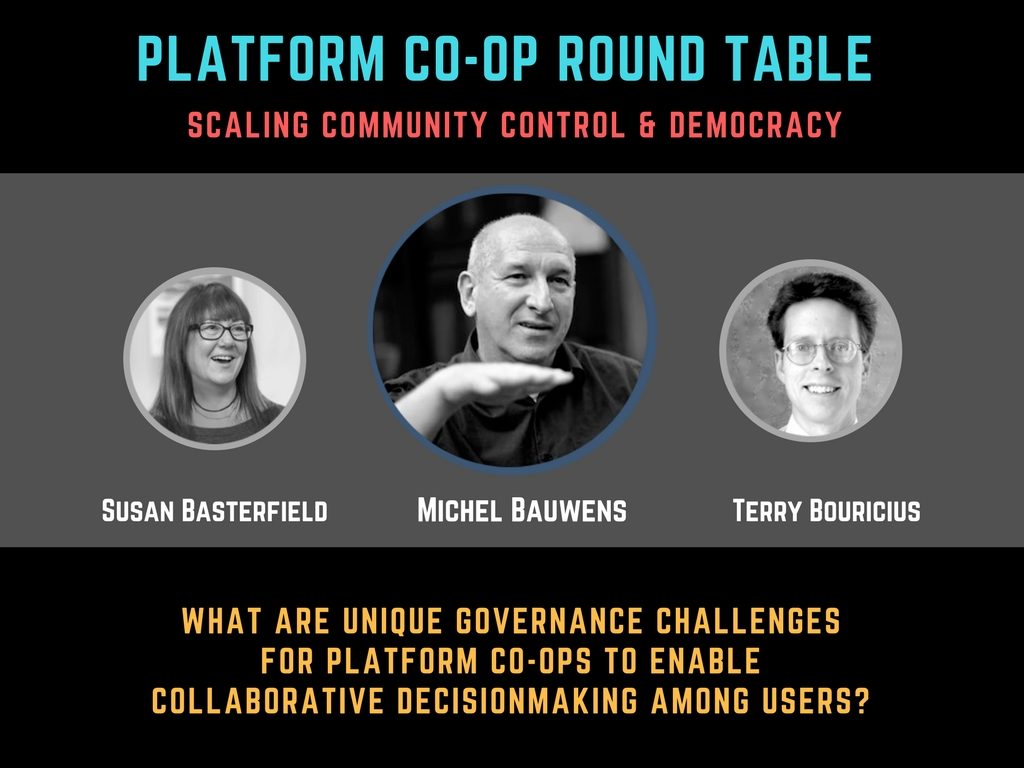 Next month, Twitter's shareholders will vote on a proposal to explore the possibility of the company turning into a partial or full user-owned platform cooperative. A platform cooperative is a website or mobile app, which provides a service or sells a product, that is collectively owned and governed by the users and members who depend on the platform — instead of shareholders. You may have heard about the stock photo site Stocksy — the organization is a platform co-op that's owned and governed by its member-photographers. But how would a platform as large as Twitter be governed by its users? To gain some insight on how it may operate, we co-hosted a Google Hangout last week.

The discussion centered on the importance of collaborative decision-making of tech platforms: What are the unique challenges — and potential solutions — when it comes to governance for platform co-ops, especially when their users are massive and remote? What are the foundations, pre-conditions, and key elements that enable collaborative deliberation? What are some real-world examples of how this can play out? Here are six ideas that emerged from the dialogue:

1. Learning and Building Upon Existing Models

Basterfield said it's critical to listen to diverse perspectives and learn how to re-orient organizational power structures from the inside out. She said it's important to find and shine a light on organizations and movements that are already reimaging how power can be distributed.

The group agreed that there could be governance modules or teams to break up the huge mass of users into specializations over certain topics such as finance, branding, and policy decisions.

Bouricius said a key issue for democratic organizations is the the bootstrapping phase — how to get things up and running. There must be an initial plan to get it off the ground and to establish a process to ensure it continues in a democratic way. This can be done by having something like a rules committee that includes experts in facilitation or democratic procedures to draft the initial list of procedural features.

Drawing from his decades of experience in public office and at a large consumer food co-op in Burlington, Vermont, Bouricius advocated for a jury model — or sortition — with random sample selections of average members to choose an organization's board of directors and make major policy decisions.

During the bootstrapping phase, an organization that uses a sortition model must establish its initial rules about how the jury is drawn from the overall community to make sure it is as open, fair, and representative as possible. Once that is initially established, there must be a way to review the process itself to make sure it continues to function democratically, Bouricius said. Through this process, which would be iterated periodically, the jury system could be used to create a nominating committee to select boards of directors or a review committee that would oversee the board.

Bauwens described the need for a kind of social charter — much like the Constitution in the U.S. — that would establish the rules of engagement and values of the community. Basterfield said there must be an agreement on expectations — not just about participation and operations of the service — but how people on the platform choose to relate to each other. She noted that this is completely absent from most traditional, extractive shareholder-focused organizations.

Bauwens pointed out that if users owned Twitter, they would establish a new vision for the platform. Instead of being closed and controlled by management from above, it would be a more open platform where many can contribute — similar to an open-source project. That means endless potential for creating features that users would like to see on the platform. It also means the creation of a new social contract — one that could be built into Twitter's Terms of Service that calls for the co-op to seriously address the tensions between free expression and sexual and racial harassment on the platform.

Since Twitter is so large and well established, Bauwens said a user-ownership conversion at this phase would be like taking over a plane in mid-flight. The question is, how would we make sure the plane doesn't crash during this transition from being a shareholder-owned, top-down organization to one that is user-owned and governed from the bottom up? At the very least, there needs to be a core team of developers and operational people who understand how it works and continue to make it run.

If the proposal passes next month, that still doesn't ensure that Twitter will become a user-owned cooperative. But even if it doesn't, this process is raising interesting questions and sparking dialogue about how technology companies could turn into platform co-ops. We'll keep you posted on how things progress for the #BuyTwitter movement — stay tuned.