6 Awesome Board Games That Teach Cooperation - Shareable
Skip to content 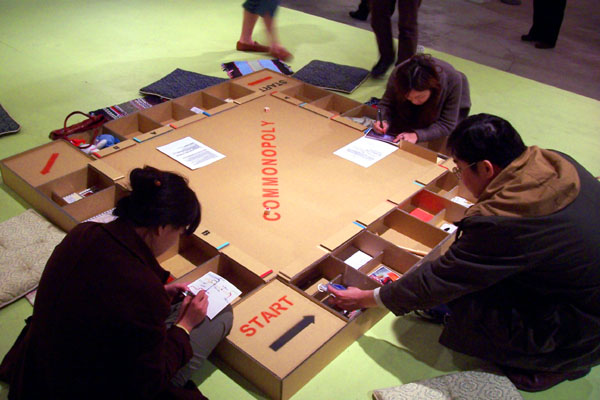 The most popular board games are based on competition. Monopoly epitomizes the winner take all nature of the genre. But what happens when that model gets turned on its head in favor of a more collaborative approach which pits the players against the game itself? Cooperation, that's what.

Whether winning means saving the world from infectious disease or corralling a bunch of puppies, it's all or nothing in the land of cooperative board games. And, because you are never too young — or too old! — to start playing well with others, there are choices for all ages. Here are a few of them:

Object of Game: This oversized board game was inspired by the classic Monopoly, though not without a collaborative spin. The game's designers note, “the goal of Commonopoly is not the exhaustion, through monopolization, of a virtual stock of goods, but rather the expansion and preservation of a self-propelling sustainable system of recycling, production and distribution.” Sharing, exchanging, and gifting are keys to success in this task-oriented game.

Object of Game: Players work together to establish — and then run — a democratic business with all of the challenges inherent in such an endeavor. Though the Point Bank looms large, the players can rally under a cooperative umbrella and break free to win for themselves and their community.

Object of Game: Here, players unite against four diseases with a goal of eradication. A role — including Researcher, Field Medic, Dispatcher, and Scientist — is assigned to each player along with its corresponding power/talent. If the team works together, they can find the cures and save the world from outbreak. If not…

Object of Game: As the crew of a spaceship in trouble, Space Alert players band together to ward off aliens, asteroids, and technical difficulties. Because this one is a real-time game, each play takes up to 10 minutes with a CD controlling the pace and giving directions to players. (Note: The CD is not required.)

Object of Game: Young players are tasked with finding a passel of puppies and getting them home safely before dark. To do so, they must work together to locate the puppies and open a path back home.

Object of Game: This game brings the whole family together to guess what the Doodler is doodling. Points are tallied for all matching answers.