10 Festivals that Can Change Your Life - Shareable
Skip to content 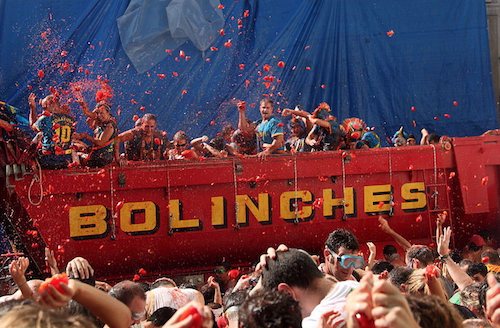 Next time you’re at a festival, take a look around and know that you are part of something ancient. Whether swaying to music in a sea of dancing bodies, riding camels in India, wearing a loincloth in Japan or shooting strangers with squirt guns full of wine in Spain, participation in festivals has long been a part of the human experience.

With roots in religious celebrations, festivals were originally, the ultimate peer-to-peer gatherings. In her book Dancing in the Streets: A History of Collective Joy, Barbara Ehrenreich writes, “Once, people could rely on official church services as occasions for dancing and perhaps drinking and other forms of carrying on. As the services became more disciplined and orderly, people had to create their own festive occasions outside of church property and official times of worship.” Historically, festivals were not something that people went to, they were something that people created. As Goethe observed about the Roman Carnival, “It is a festival that is not actually given to the people, but which the people give themselves.”

Designed to mark important days, strengthen communities and celebrate individuality, festivals are also a time to cut loose; a time when social codes are downplayed, lines between age, gender, race and status are blurred, and taboos are broken. The potential for over-indulgence, excessive intake of drugs or alcohol, nudity and loosened sexual norms have been a part of group festivities since prehistoric times.

Festivals with a high participation factor provide opportunities for what French sociologist Emile Durkheim called “collective effervescence,” as well as extreme individualism. As Ehrenreich writes, dancers “may experience a self-loss in the dance, or a kind of merger with the group, but they also seek a chance to shine, as individuals, for their skills and talents.”

Exploring aspects of oneself that are normally held in check can have a liberating, even life-changing effect. Multiply that by thousands, or hundreds of thousands of people, and group euphoria hits a fever pitch. And at a festival’s conclusion, the ecstatic state lends way to a return to normalcy; a symbolic death and rebirth back into ordinary life.

Following is a roundup of some of the world’s best all-in, you-are-the-party festivals for those seeking individual and collective activation on a massive scale. 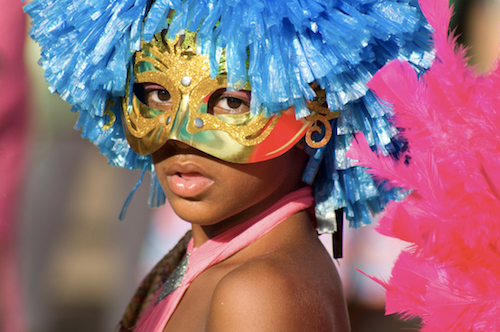 Photo by Ryan Uhrich. Published under a Creative Commons license.

1. Carnival (Brazil)
Dating back to pagan Spring festivals, Carnival is the ultimate street party. Celebrated around the world with hotspots in New Orleans, Trinidad, Sydney and more, the Rio Carnival is the queen of them all. An over-the-top celebration of indulgence to get the ya-ya’s out before Lent begins, this is not a spectator sport. Join a parade, get in on the drumming, Samba through the streets and bring your finest, most feathery and flamboyant duds (or strip down to the essentials if that’s more your style) because at Carnival, the people are the party. 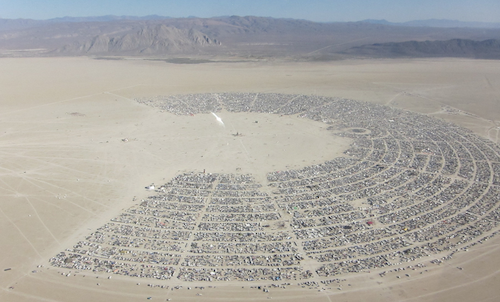 Photo by WKHarmon. Published under a Creative Commons license.

2. Burning Man (United States)
Originally just a handful of people celebrating Summer Solstice on a San Francisco beach, Burning Man is now a 50,000-plus participant celebration of creativity and technology. Forced out of our highly regulated and privatized world into the Nevada desert, the festival is a gigantic gathering of cultural creatives, tech-heads, musicians, artists and revelers who create a community-driven, pop-up, utopian city based on such tenets as radical self-expression, radical self-reliance and radical inclusion. 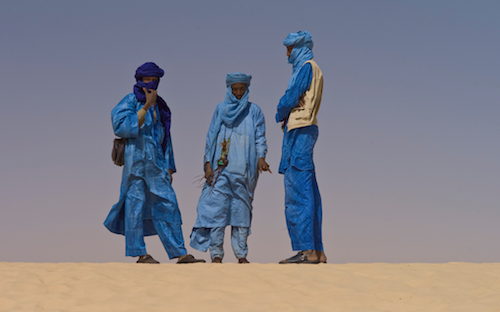 Photo by Alfred Weidinger. Published under a Creative Commons license.

3. Festival in the Desert (Mali)
Touted as “the world’s most remote music festival,” the Festival in the Desert is a three day camel ride (half a day by Jeep, for the non-Camel-riding among us) from the nearest town. An event with centuries-old roots in Tuareg (the nomadic people of the Sahara) tradition, the festival originated as a rendezvous to exchange stories and news and compete in duels of camel racing and swordsmanship. It now includes a musical element that has showcased the talents of Ali Farka Toure, Manu Chao, Robert Plant, Tinariwen and more. It’s a festival like no other and if you can get there, the life-changing potential is high. 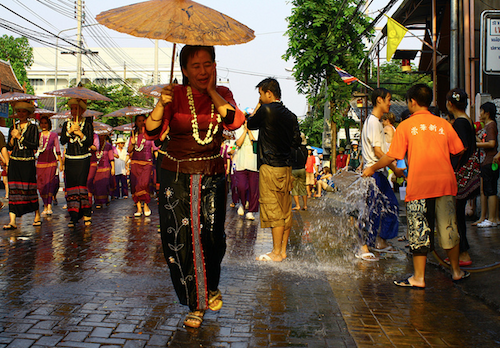 Photo by fredalix. Published under a Creative Commons license.

4. Songkran Water Festival (Thailand)
An enormous water fight that takes place in cities throughout Thailand, Songkran is an if-you’re-here-then-you’re-fair-game type of festival. Part Buddhist celebration and part traditional ceremony where young Thais ask for blessings from elders by gently pouring water over their hands, the ritual has evolved into a no-holds-barred soaking (via balloon, squirt gun, hose, bucket, bowl etc.) of anyone and everyone. Conveniently held during the hottest month of the year in Thailand (April), young, old and in-between all take part in the fun, if for no other reason than to cool off. 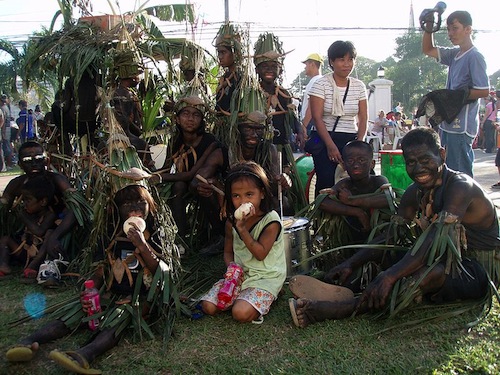 Photo by Mike Kouklis. Published under a Creative Commons license.

5. Ati-Atihan (Philippines)
Ati-Atihan began as a 13th century thanksgiving tribute from Malay immigrants to the indigenous Ati people of the Philippines. The new-comers painted their faces black in celebration of the Ati, who had given them food and land. Over the centuries, the festival has morphed into a church- and government-sanctioned celebration of the “Holy Child,” that transforms the city of Kalibo into a week-long party, with dancing, drinking, feasts, processions, masses, balls, all-night parties and lots of black face paint. Not a festival for bystanders, this is a surging, parading, all-inclusive celebration by and for the people. 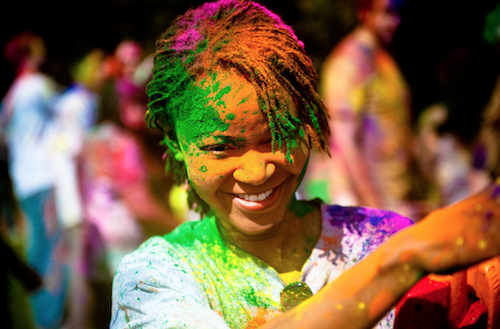 Photo by Chris Willis. Published under a Creative Commons license.

6. Holi (Northern India and Nepal)
A grand Hindu festival, Holi kicks off Spring with a celebration of color that takes the form of people running wildly through the streets dousing and dusting each other with a rainbow of colorful powders and dyes. Fueled by alcohol and cannabis, the celebration stretches back further than history can recall and is a wild free-for-all that culminates in bonfires and the burning of effigies, symbolizing the triumph of good over evil that is as peer-to-colorful-peer as it gets. As the authors of the guidebook A Year of Festivals warn, “If you want a colourless Holi, you’d best stay inside for the day.” 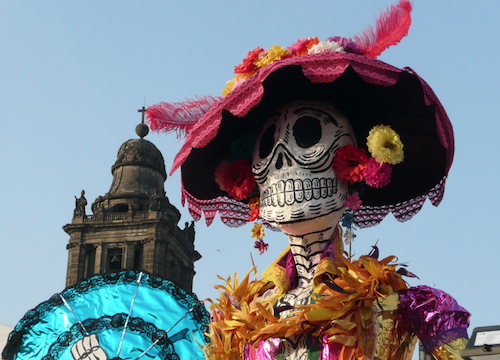 Photo by Chupacabras. Published under a Creative Commons license.

7. Dia de los Muertos (Mexico)
One of the most widely recognized and celebrated festivals, Dia de los Muertos (Day of the Dead) is a time to pay respect to those who have passed, to welcome their spirits back to the earthly realm and remind those of us still living that our own mortality is certain. An ancient tradition passed down from the Aztecs, the festivities include processions, grave cleanings, decorations, skeleton face paint, an abundance of food and drink, effigies, altars, flowers and lots of little skeletons, made from materials including sugar, paper, chocolate and clay, doing all sorts of un-dead activities like dancing, smoking, playing music and getting married. Participation ranges from family gatherings within the home to street-filling, community-wide celebrations. 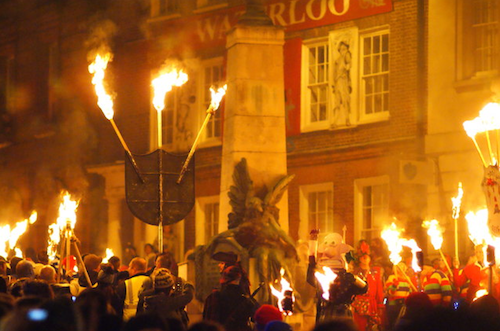 Photo by Peter Trimming. Published under a Creative Commons license.

8. Bonfire Night (England)
Originally called Guy Fawkes Night, Bonfire Night celebrates a thwarted attempt, by disgruntled Catholics, to blow up the hardline-Protestant House of Parliament and those in it. In the 17th century, the festival’s namesake Fawkes was caught with the explosives for the attack and, along with his co-conspirators, was killed, drawn and quartered. These days, however, the origin story is largely lost or forgotten. Celebrations are non-religious street parties complete with flaming torches and effigies, sparklers for the kids, fireworks and bonfires. Wine flows freely during the festivities, helping to take the chill off the cold, November night. 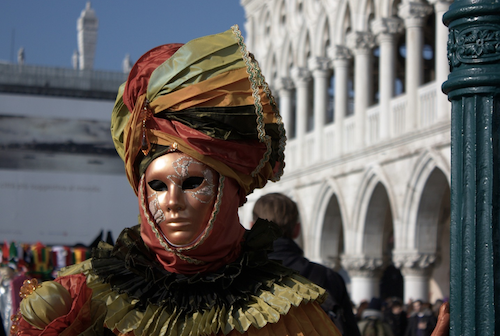 Photo by Caterina83. Published under a Creative Commons license.

9. Carnevale Venezia (Italy)
The alter-ego to Rio’s wild, flamboyant and scantily clad Carnival, Carnevale Venezia is a refined and sophisticated, pull-out-the-baroque-finery, dress-up party. A celebration of Venetian history, culture, lavish costumes and ornate masks, the festival is rich with theatrical performances, balls, processions, tournaments, decorated boats and plenty of masked party-goers. A prime time for the somewhat inhibited to get their Carnival groove on, this is an extravagant opportunity to express inner luxuriousness and be a part of something grand. 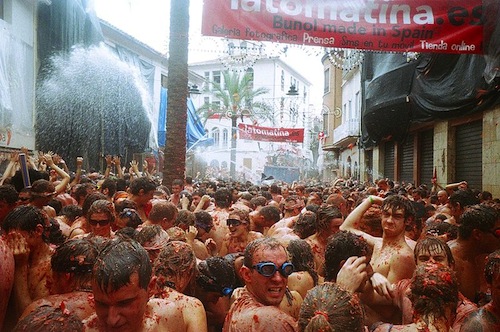 Photo by Graham McClellan. Published under a Creative Commons license.

10. La Tomatina (Spain)
Imagine a food fight so massive that it spans an entire town. Now imagine that the food thrown is squashed tomatoes; that the fruit is in such abundance that festival-goers have to wear goggles to make their way through town; and that there are areas so thick with tomatoes that one could bathe in them. Got it? That’s Tomatina. Attracting tens of thousands of tomato throwers, the festival is a short-lived (one morning only) celebration of abundance, community and, well, tomatoes. An opportunity for friends, families and strangers to abandon inhibition and indulge childhood food-throwing fantasies, La Tomatina will either be the most fun you’ve ever had or turn you off of tomatoes forever.

What participatory festivals have you been to or know about? Please share in comments.

Sources:  Dancing in the Streets: A History of Collective Joy, by Barbara Ehrenreich A Year of Festivals, by Andrew Bain, James Bainbridge and Marika McAdam