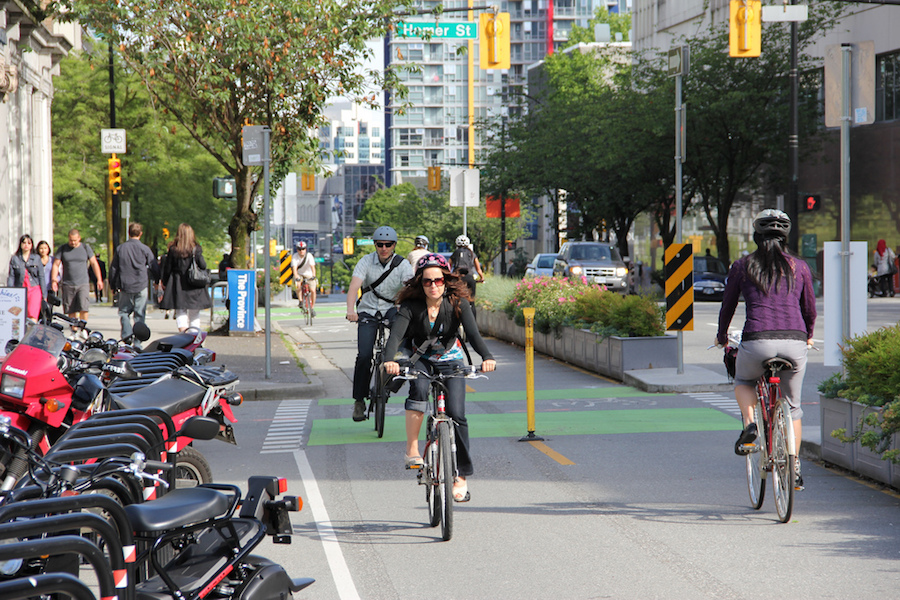 Cat Johnson|January 19, 2017April 23, 2019
In 2012, the city of Vancouver in Canada's British Columbia province set a lofty transportation goal — for people to make more than 50 percent of their trips in the city by foot, bicycle, and public transit by 2020. In 2015, the city had already met its target.
As the short video by Streetfilms below shows, the city accomplished this through a multi-modal approach by making sustainable transportation safer, more convenient, and more accessible. These are some notable points mentioned in the video:
1. No freeway. In the late-1960s and early-1970s, residents rejected freeway projects that would run through the city.
2. Reallocation of funds. Some of the money that would have been used for an expressway that crossed the Burrard Inlet waterway was reallocated to create the Seabus, a passenger-only ferry service.
3. Protected bike lanes. Within the city's impressive network of bike lanes, 24 percent is considered usable for all ages and abilities. Some of the protected bike lanes were created with deep infrastructure, while others were created using simple planter boxes to separate bikes from other traffic.
4. Waterfront as public space. Spurred by the "Transportation of the Future" theme of Expo 86, a world's fair held in the city in 1986, the waterfront has been transformed into a thriving public space and an alternative transportation hotspot.
5. Easy public transportation. An entire street in downtown Vancouver is dedicated to public transportation. Cars are directed to adjacent streets.
6. Streets closed to cars. During the 2010 Winter Olympics, the city closed certain streets and viaducts to traffic and made them pedestrian-friendly public spaces. In doing so, they demonstrated that "the world didn't end" when they closed a few streets, the city's former chief planner Brent Toderian said.
7. Convenient light rail. Skytrain, Vancouver's light rail system, is the world's largest automated system with 53 stations and trains that arrive every 90 seconds.
8. Bikeshare. The city has more than 600 bikes in its bikeshare system and has a goal of 1,500 at 150 stations. Within a few weeks of the system's launch, 4,000 people had signed up as founding members.
9. Carshare. Vancouver has a thriving carshare network that includes Evo, Car2Go, ZipCar, and Modo.
10. Transportation options. A truly robust sustainable transportation system is made by having numerous options that people are happy to embrace for getting around. As Toderian points out, "The best thing is not just to have available choices, but delightful choices everyday."