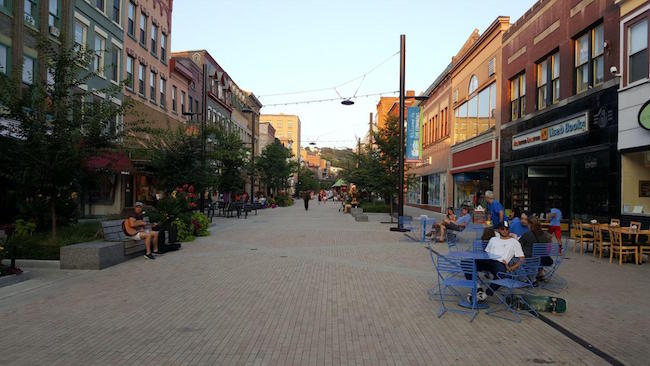 Twenty years ago, a piece on Utne Reader praised Ithaca, New York, as one of the "most enlightened" places in America. Today, Ithaca is still a hub of the kinds of sharing that earned it that recognition decades ago. This culture of community stewardship came about largely due to the city's agricultural surroundings and its back-to-the-land movement. Groups began self-organizing and experimenting with different ways of generating shared community wealth. That tendency has grown rapidly over the years. Though this list is far from exhaustive, here are ten reasons why Ithaca is an incredible Sharing City.

1. Pay It Forward Boxes on The Commons

At the heart of Downtown Ithaca is a three-block area known as The Ithaca Commons. Once a street accessible to cars and other motor vehicles, it's now been transformed into a walkable brick-paved area with a playground at its center and planters with flowers and vegetation around it. There's also ample public seating. 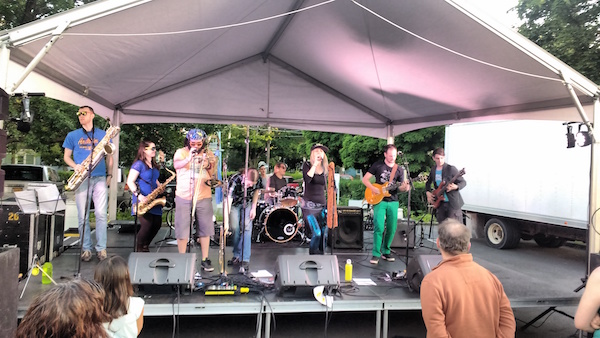 A concert on the commons

If you are on the Ithaca Commons, you may notice a series of red boxes scattered throughout. These are "Pay It Forward" boxes, where anyone can donate money or personal checks, which are directed to low-income residents. These boxes are part of a new program, run by the Downtown Ithaca Alliance, a not-for-profit organization dedicated to promoting and developing the community, culture, and economic vitality of downtown Ithaca. 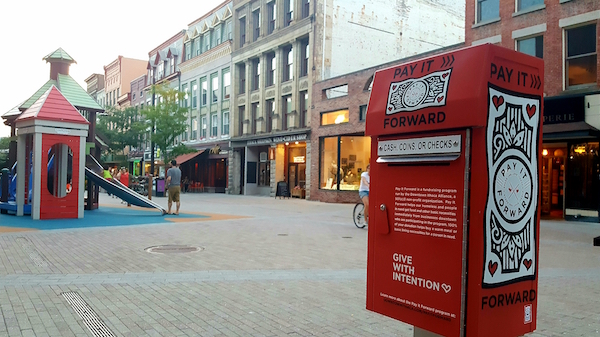 The Pay It Forward boxes

2. Community Currencies and the Time Bank

Yet Ithacash is not the first to innovate in the community currency realm here, or to use it as a tool to build a spirit of shared wealth. In 1991, the Ithaca HOURS program was started by community organizer Paul Glover. Ithaca HOURS are among the best-known community currencies globally. HOURS were at one time accepted for donations by all three mayoral candidates in Ithaca and the program inspired countless localities to create their own regional currencies. 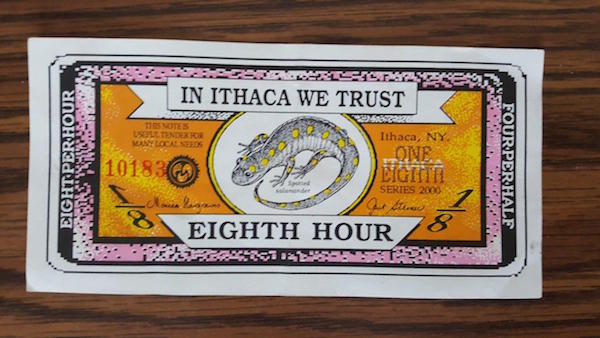 In a similar vein, the organization Tompkins Time Traders (T3) started a few years ago. T3 is a time bank — it keeps track of accounts for people who spend and earn hours of time rather than dollars, which effectively makes the system operate like a pro-social currency.

In 1990, while environmentalist Joan Bokaer was on a symbolic walk across the U.S. and giving lectures on sustainability, she developed the idea for an eco-village, which she eventually started as EcoVillage Ithaca (EVI). EVI was one of the first in the world. It is now a thriving model of what an ecologically-sound future could look like, with well over multigenerational 200 residents, with cohousing and communal living options as well as energy efficient neighborhoods.

EVI residents make decisions collaboratively and volunteer a few hours each week to maintain the health of the village. EVI also has a 10-acre organic farm, another five-acre CSA berry farm, and the Groundswell Incubator Farm, which supports and hosts for low-income farmers or people from vulnerable populations who are just starting out in farming.

The Finger Lakes ReUse Center is an impressive organization that simultaneously reduces waste and conserves community wealth through its programs. Most visibly, ReUse diverts donated goods from the landfill by either re-selling them, stripping them into usable parts, and by deconstructing entire houses so that the materials can be reused.

Each Saturday at the ReUse Center, the Fixers Collective gets together to fix broken goods and share knowledge on how to repair items. The center also pays a living wage to all employees and offers mentorship and skills training to those who seek it. Their ReSET program trains underserved community members in technology and construction. The center also repairs electronics at a lower cost or can refurbish, resell, and recycle them. 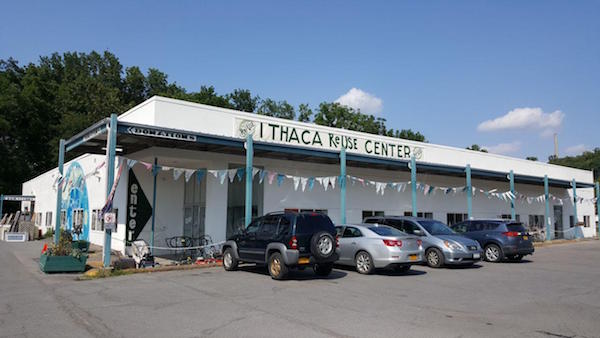 A similar program is Recycle Ithaca's Bikes (RIBs). Started in the early 1990s, RIBs accepts used bikes and bicycle parts — rerouting them from landfills so that they can be repaired and reused.  Now a program of the Southside Community Center, RIBS also teaches people about bike repair, bike safety, and generally promotes a collaborative knowledge-sharing environment.

One of the local credit unions in Ithaca, Alternatives Federal Credit Union not only offers community services like free tax preparation for those below a certain income level and provides financial education and services for young people, but it also does something somewhat unique to support regional nonprofits. Through its Community Partnership Lending Program, this credit union makes it much easier for nonprofits to offer loans to beneficiaries in any designated community. Once a nonprofit raises funds, the credit union will potentially double those funds to be lent to the nonprofits’ beneficiaries, while providing much of the administrative support required for these loans.

Though the nonprofit shoulders the risk in the event of default, it also gets to set the policies of the loan. This allows that nonprofit to lend at lower rates to populations deemed as too risky to receive anything but extremely high-interest loans with predatory rates. Plus it can help people build credit, all in partnership with the credit union.

Ithaca's Children's Garden (ICG) is a three-acre public garden — part of a larger park — where children can learn about food-growing or can simply play, experience, and learn from nature. From environmental education to farming to cooking, the Children's Garden offers free drop-in courses and others that require registration, but also grant scholarships for those who need it.

The popular "Hand-on-Nature The Anarchy Zone" is an area where kids can play and reshape their environment with clay, straw, cardboard, tires, and a whole host of other materials. ICG also hosts an International Mud Day festival (funded by a government grant), which is exactly what it sounds like — a celebration in the mud.

In addition to supporting ICG, Cornell University (located in Ithaca, just up the hill from The Commons) supports other innovative agricultural programs through its cooperative extension. A cooperative extension enables local residents to benefit from the research and knowledge generated by the university. Cornell Cooperative Extension (CCE) promotes farms in the area, including promoting Open Farm Days where farms in the area are open to the public for visits and informational tours. 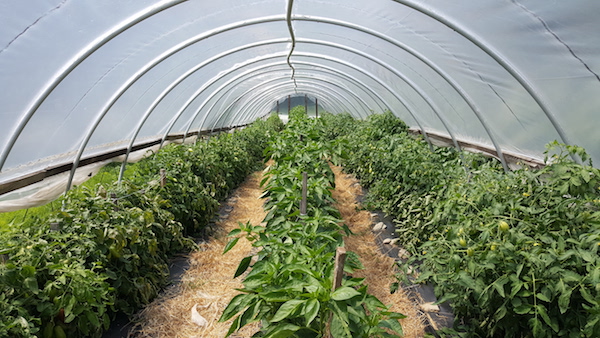 For carnivores, CCE also supports the Meat Suite, which enables people to buy bulk or whole animals (cleaned, cut, and wrapped) straight from the farm. If that sounds like a daunting storage problem, there’s a solution: the Ithaca Meat Locker, which is a shared freezer space. At their core, these efforts are similar to a CSA; they benefit farmers by saving them a lot of time and costs at the market while lowering costs for the consumer.

Green Star is a member-owned grocery co-op, which has been slowly growing for decades and now has three locations in Ithaca. It is arguably one of the most progressive co-ops, which is wholeheartedly committed to building a sustainable future in the country.

Though it started with organic produce, Green Star does far more than just sell groceries and recycle profits back into the community. The co-op also offers classes on  cooking, nutrition, and environmental topics in its classrooms, many of which are free. There is much to say about Green Star, including the fact that the co-op supports local schools and nonprofits in many ways, cultivates close relationships with local farms, and currently has the largest solar array owned by a U.S. food co-op, which offsets a significant portion of its energy use.

The Finger Lakes Climate Fund is a special type of carbon offset program that allows people calculate their carbon footprint and donate in proportion to that footprint. Those donations are then turned into small grants that go to low and medium-income families to cover the cost of improving heating systems, insulation, and other projects that lower energy use and reduce greenhouse emissions.

By improving energy efficiency this way, this program kills two birds with one stone — reducing the energy costs for families while allowing carbon offset donations to go to work directly in the local community. The Finger Lakes Climate Fund is run by the larger organization Sustainable Tompkins which offers other small grants to grassroots neighborhood projects.

Each Spring, Ithaca's Mayor Svante Myrick turns his city hall parking space into a tiny park with a seating area. 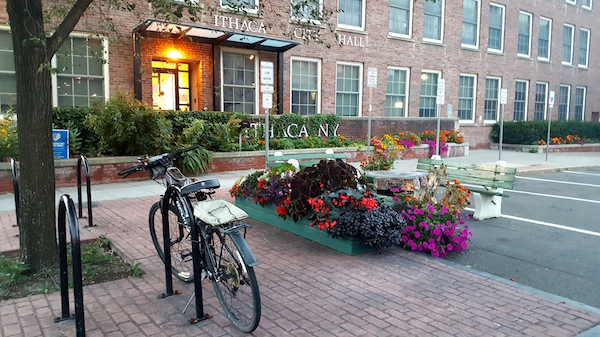 Myrick, who walks to work is one of the youngest mayors in the U.S., recognizes that this parking lot "stunt" as he has called it, is symbolic more than anything. It's a symbol of Ithaca’s commitment to creating an environmentally-conscious, accessible, shared future.

All photos by Aaron Fernando, the Marketplace Coordinator for Ithacash, a local currency initiative in Ithaca, New York.