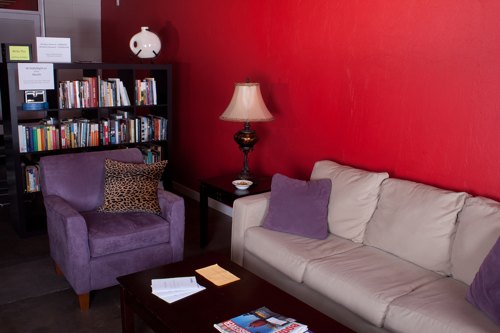 The stereotypical image of the writer is that of the reclusive shut-in, most memorably–if sensationally–portrayed by Jack Nicholson in The Shining. And while there may be a kernel of truth in the stereotype of the recluse, as David Duhr, co-founder of Austin writing center WriteByNight notes, “[writers] also like their community.” Located in Austin’s burgeoning East Sixth district, WriteByNight aims to be a hub for Austin’s writing community. The center, which opened last November, keeps the lights on by offering writing coaching, manuscript consultation and membership services, but opens its doors to all writers three days a week for entirely free “Write Here” sessions, allowing scribes to work in the cozy yet well-appointed space, meet fellow Austin writers, and take advantage of free coffee, snacks, and writing supplies. I spoke with Duhr and co-founder Justine Tal Goldberg about the inspiration behind the space, the Austin writing scene, and why shared space is important to fostering a vibrant writing community. 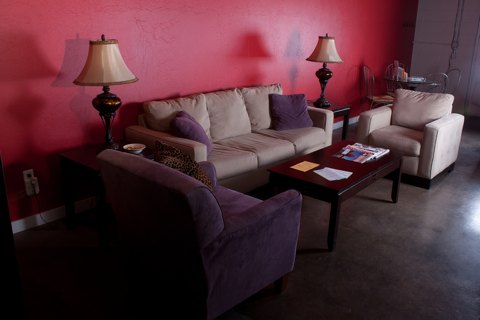 Can you give me some background and history on WriteByNight?

David Duhr: We started the business in Florida in 2009. We came here to Austin in July of last year, spent a few months getting organized here in town, and we opened up in November. We’re still in the early stages, word of mouth is starting to pick up a bit, but it takes a while. But we have a lot of good stuff on the horizon, the ASF party in particular.

Justine Tal Goldberg: In Florida, we actually started the business with one single creative writing workshop. David and I moved to Florida from Boston and were both writers. There were no offerings we could take advantage of, so we looked at each other and said "okay, if there's nothing here why don't we just make something? We've been enough workshops in our lives and we certainly have the experience and qualifications, so why don't we just do it?" So we started with one workshop and it filled up in an instant, it went really well so of course we did it again, and added more workshops, ones that were genre-specific and then expanded into other counties. We were hiring instructors to help us, and it kind of snowballed.

The business looked very different in Florida than how it does here. Here, on the business side of things, we operate as a writing center and a writer's service. They're very closely related but they're not the same thing. The writing center is the shared space for community, and it's totally free. It's not a revenue stream for us, nor is it intended to be. The writer's services, that's the business side, where we focus on one-on-one attention with writers of all experience levels, working in all genres. While the business looked very different in Florida, I think our basic principles stand—we were always interested in groups of writers coming together, we were always interested in community and fostering the writing community wherever we were.

We see this as a dedicated space for writers, even people who maybe would be stand-offish about calling themselves writers, which can be tricky! We work with people of all experience levels—beginners, professionals, and published authors. It's a very different environment than a coffee shop. We're not a Starbucks, we're definitely not corporate, it's very much a boutique. If you walk in here, I'm sitting right here, I'll be talking to you, we're going to have an interaction. We hope that it's comfortable and a nice break from having to sit in a coffee shop where if you're working on your novel for eight hours and not ordering something every half an hour, you're going to start to get the stink eye. 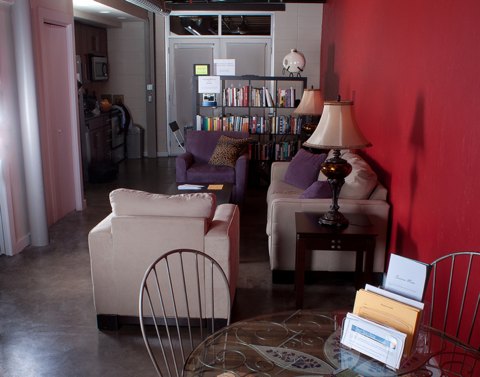 Do you have any private writing spaces?

Goldberg: We’re going for a community feel in here, so we didn’t really want to section people off. We don’t want to allow them to go hide in the corner. We want them to be among other writers and talking and doing what they’ve got to do.

Duhr: Writers are reclusive but they also like their community.

Goldberg: It’s a relatively small space to work with, but I feel like it serves our purposes. If it was a huge sprawling warehouse I don’t know if you would get the same sort of intimacy that you get in this atmosphere.

Can you tell me a bit more about the programs you offer?

Goldberg: In addition to keeping our doors open to individual writers and readers and people who are interested in literature in general, which is called Write Here, we also have a program we call Meet Here, another totally free service. We allow groups—writing groups, reading groups, anything to do with literature and writing—to come in here and use the space. We have some meetup groups who use the space regularly…

Duhr: …writing groups, reading groups. We have a guy who taught a session during RISE on writing a nonfiction book.

Goldberg: It’s amazing how many people we can hold in here when we need to. We hosted the afterparty for the Texas Observer writer’s festival. 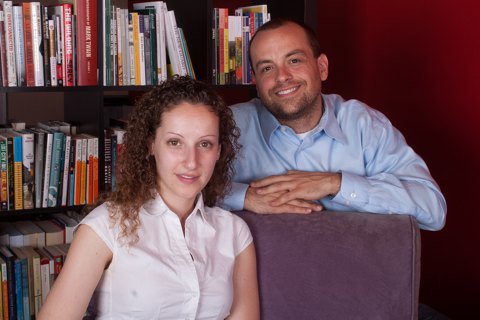 Goldberg: Sure, and some people do. That's what we're here for, but we're also really pleased to just have anybody come in. We're just happy to talk to writers, as corny as that sounds.

Duhr: We have people who come back again and again who we'll never get as clients but we're just happy to have them.

Goldberg: It doesn't cost us anything to just open the doors and invite them in.

Duhr: We're here anyway so we'd like to have the company!