Study Shows Coworking is About Community - Shareable
Skip to content 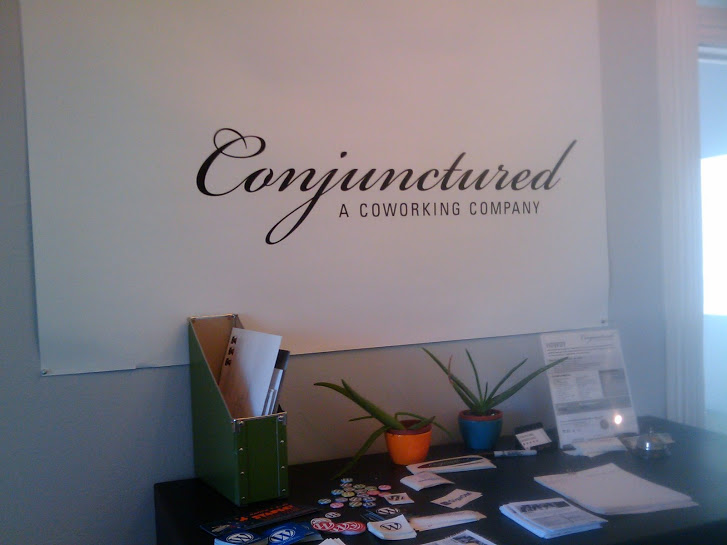 “You know how in L.A. everyone has a movie script? In Austin, everyone has a startup.” It was January 2012, and I was trying to explain to a Dallas Morning News reporter why Austin had so many coworking spaces.

A coworking space is, roughly speaking, an open-plan office space in which unaffiliated professionals can lease a desk for a monthly fee. I first heard about coworking spaces in June 2008 when I began talking to four freelancers — John Erik Metcalfe, Dusty Reagan, Cesar Torres, and David Walker — who had decided to open Austin’s first coworking space, Conjunctured. In 2008, some other cities had coworking spaces — San Francisco had opened the first one, Spiral Muse, in 2005 — but Conjunctured was to be Austin’s first. It would give some of Austin’s many small business owners, freelancers, contractors and subcontractors, and remote workers a genuine workspace outside of their home offices and coffee shops. And it would give Cesar, David, Dusty, and John Erik an expanded subcontractor network under one roof: a way to expand their subcontractor network, meet new potential subcontractors, and facilitate rapid collaboration and swift trust. 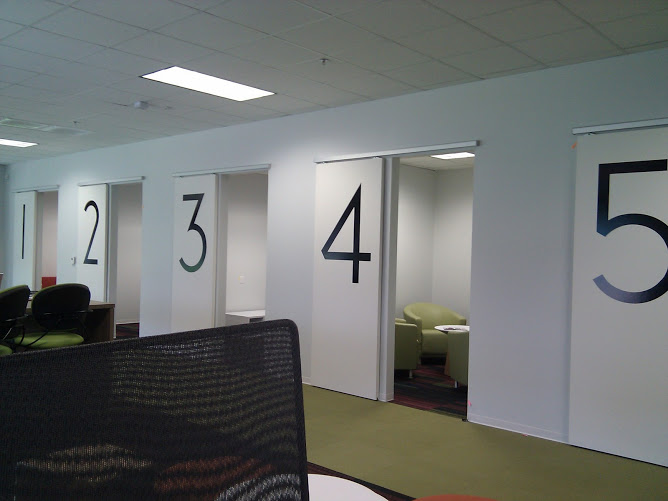 The small conference rooms. Each has a hanging door, and each is configured differently. Photo credit: Clay Spinuzzi. Used with permission.

Since non-employer firms in the information sector do most of their work on computers, they can choose to work practically anywhere: All they need is a laptop, mobile phone, and broadband access. They can — and many do — choose to work in their own homes, in coffee shops, in libraries. They can even choose to work at Dairy Queen (although, having tried this, I can’t recommend it).

But those alternate workplaces present a lot of drawbacks. Here’s what I told the Dallas Morning News:

“Many independent workers have home offices, but they find they stay in their PJs until noon or the dog barks when they’re on a conference call,” Spinuzzi said. “They’ve also told me that they get depressed because they don’t meet anyone. They’re really looking for a place where they can do work steadily, building relationships, network, and have a place to meet clients.” 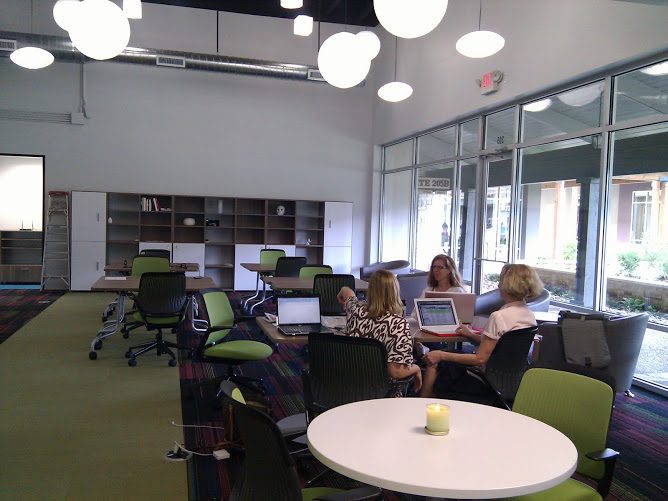 Walk in a bit, and here's the open-plan coworking area. Most tables are on rollers so the space is easy to reconfigure. Photo credit: Clay Spinuzzi. Used with permission.

I spent two years visiting coworking spaces, interviewing proprietors and co-workers, watching people work in the space, and looking at the spaces’ websites, social media presences, and reviews. In my published study, I concluded a couple of things.

One, people don’t seem to agree on exactly what co-working is, partly because they have so many motivations for coworking. Some want a place where they can socialize with others; some want to be able to make professional connections, recruit subcontractors, and pick up freelance jobs; some want a professional environment to which they can bring clients. So when I asked them “What is coworking?” their answers were all over the map. It’s partly for this reason that coworking has exploded in Austin: coworking sites keep differentiating to address these different needs. I believe that differentiation will increase in the near term.

Two, the main service of coworking really is the community that takes root in the space. Coworking is like a party: The host can provide the location and the amenities, but what makes the party successful is the group of people who come to it.

As I told the reporter, Austin is full of startups — and contractors, and freelancers, and other independent creatives. For these people, working alone isn’t an option; they’ve elected to work alone, together. And as companies continue to outsource non-core functions, I expect we’ll see more coworking spaces and more variations of coworking.

Meet Clay and learn more about his work at the Global Coworking Unconference Conference March 5th and 6th in Austin, Texas.

I'm a professor of rhetoric and writing at The University of Texas at Austin. There, I study workplaces and how people circulate information through them. I've written three books:

I'm a professor of rhetoric and writing at The University of Texas at Austin. There, I study workplaces and how people circulate information through them. I've written three books: Tracing Genres through Organizations (MIT Press, 2003), Network (Cambridge University Press, 2008), and Topsight (Amazon CreateSpace, 2013).