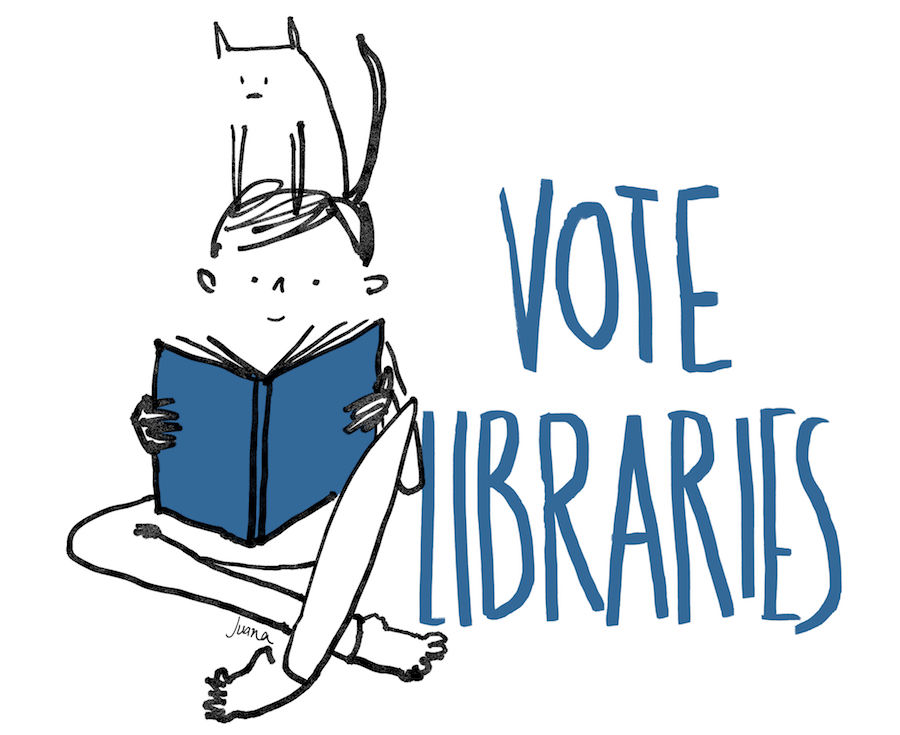 Cat Johnson|February 27, 2017March 4, 2019
Every so often, a measure to support libraries shows up on my local ballot in Santa Cruz, California. Fortunately, people here seem to love libraries, so initiatives that focus on supporting and uplifting them generally pass. But getting an initiative on a ballot is no small feat.
That's where EveryLibrary comes in. It's a nonpartisan political action committee formed in 2012 to educate officials, citizens, and library personnel about supporting local library initiatives. We caught up with the group's executive director John Chrastka to learn about EveryLibrary's on-the-ground work, including how it works with individual communities and helps libraries navigate big challenges.
Cat Johnson: What inspired EveryLibrary?
John Chrastka: The library community is really great at building affinity and talking about using the library. But it's hard to talk about taxes and also still maintain your identity, in the eyes of the public, as a librarian.
We wanted to set up a political action committee in order to talk with the public not about literacy only, not about job skills and resume help only, and not just about community development only, but also about the taxes that support that and the taxes that help librarians have the resources they need to do that great, transformational work in their communities. 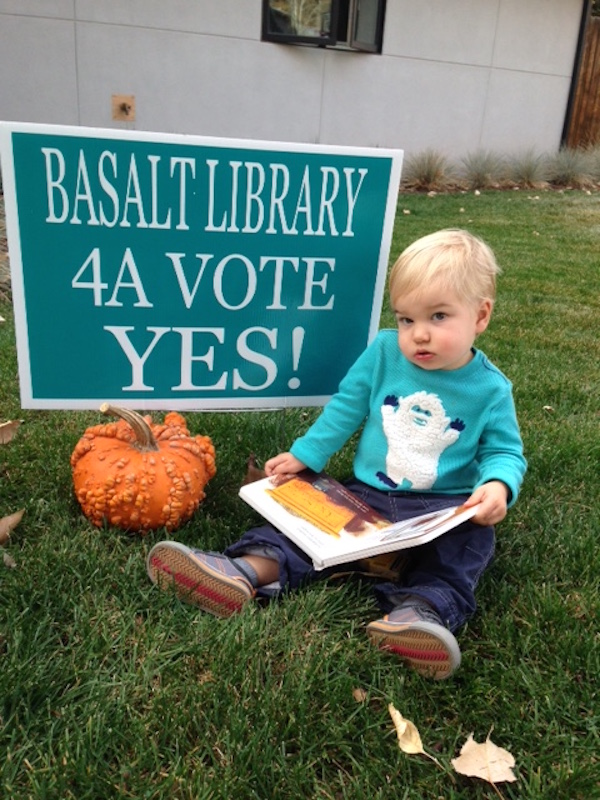 EveryLibrary works with small towns and big cities to support library ballot measures. Photo courtesy of EveryLibrary
EveryLibrary is a national organization, but it's focused on prepping, strategy, feasibility, fundraising, and training around local library initiatives. What does that look like in practice?
We've been active in over 30 states on elections as small as Darby, Montana, or a place like Georgetown, California, way up in the Sierras. These are little towns where there is a small request of the voters to approve either operating expenditures — collections, programming, services, staffing — or building initiatives to either rebuild, remodel, or build the first new building since Carnegie died.
We've worked with some big towns, too: New Orleans, Santa Clara County in California, the Mid-Continent library system outside of Kansas City. In each of those communities, we work with the library staff and board to help scope out what to ask for at Election Day. What's the hope for the community? Because that's what's on the ballot, the hope for the community, through the library, to be able to better serve, or to be able to build a more perfect kind of facility.
Because we're a political action committee and not a nonprofit, we also work with the Get Out the Vote campaign, which is neighbor-to-neighbor, voter-to-voter, your classic knock on the door or telephone calls that say, "Hi, I'm John. I'm with the library campaign. We're voting yes in our town for these reasons. Will you join us in voting yes, as well?"
That kind of voter engagement activity is at the core of what we do in these small towns and big cities. Rural, suburban, urban, red counties, blue cities, everybody, because that will work.
What are some of the biggest challenges libraries face right now and how does EveryLibrary work with local systems and schools to address those challenges?
The biggest three challenges are around communications about what the library really does these days. One is the question, "Why do I need the library, everything's on the Internet?" There are a lot of resources that are not available on a Google search. Libraries not only help you find that information … but to find the information together and learn how to interrogate the information how to use the information, how to put it to work. That question is a fascinating one to answer in a lot of different communities we've worked with.
The second question is not, "What's in it for me?" but "What's in it for other people?" Those kids, people looking for work, folks looking to start their own business or get their next best job. There's a lot of compassion in communities for our neighbors still. That's a beautiful thing about America. How can a library, in the 21st century, serve folks of all backgrounds? … They're interested in hearing about that. If they haven't been there since they were kids themselves, they want to know. They just don't have a current experience of it. So updating their understanding is a key challenge.
The third challenge, quite frankly, is the rise of the any-tax-is-a-bad-tax philosophy of government. They want every single tax in the same bucket. But if you put all of them into the same category, you can't distinguish between a tax that has a lot of leverage, which is what a library does, from a tax that throws good money after bad.
It's a shame, in my opinion, that the apex of the anti-tax movement has started to target libraries because the folks that need economic development and the focus that libraries have on economic prosperity is significant. Let's put our tax money to good use, for a change. 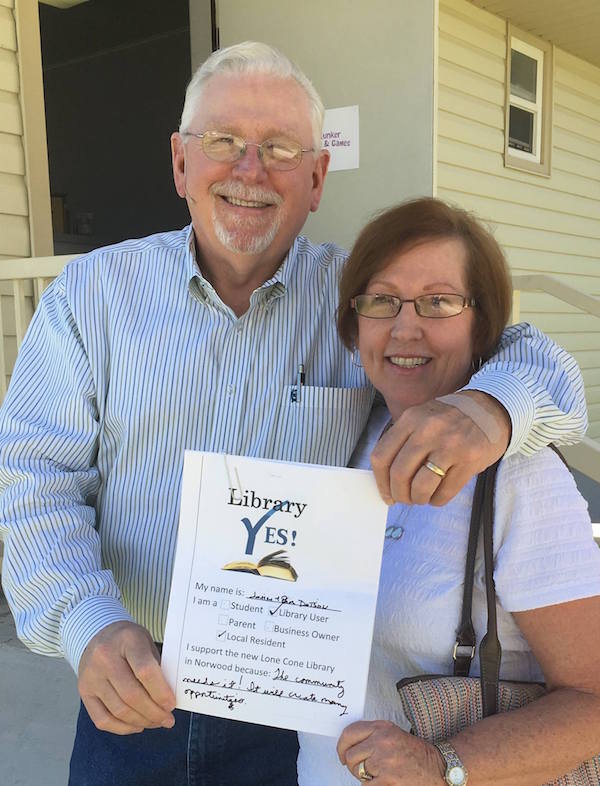 EveryLibrary wants to make sure that libraries get enough funding to both sustain and grow their impact. Photo courtesy of EveryLibrary
I see the commons, including our public spaces and libraries, as holding potential to bridge partisan divides and connect people around common interests. Tell me about the nonpartisan approach of EveryLibrary and how you work with communities of all types to support libraries.
The difference between red counties and blue cities, between conservative areas and more liberal areas, the difference between downstate Indiana and the Bay Area, is insignificant when it comes to local issues.
Top of the ticket was, of course, very divisive this year. But this divisiveness about the top of the ticket hasn’t yet translated into these local campaigns. There is a lot of interest in the future of the community, the wellbeing of our children, and the economic security of our community.
That expression through the library might be programmatic in the Bay Area, it might be service-oriented in down-state Indiana, it might be collections in upstate New York. In the four years we've been around, we've seen very successful library campaigns in every type of community. We've had heartbreaking losses that conventional wisdom says shouldn't have been a loss. I'm heartened by the fact that Americans still want to see the library as a center of communities and they're willing to have a good conversation about the taxes that support the services and fund the activity of the librarians.
There are exciting things happening with libraries right now, from makerspaces and coworking spaces to arts and culture programming, youth tech projects and much more. What do you see happening with the evolution of libraries and what role does EveryLibrary have to play?
EveryLibrary wants to make sure there is a funded future for those libraries. For a voter-approved measure, how do you talk about how taxes are raised and expended in our communities for the common good.
Our role is to help with the vocabulary. For many library communities, they don't go out but once in a generation, so we're here to help them have that once in a generation conversation about taxes.
Some of the most exciting things are new to this generation of library services. Makerspaces, the chance to do 3D printing, to be able to do old school crafting in a new environment, the artisans and the inter-generational transfer of knowledge around cooking and crafting and now around making, it's an exciting time.
The biggest evolution for the library — that I see as having the most impact across the community — is the evolution of the coworking space and the library as an incubator of new business. You can have a spot in your hometown and you don't have to travel all the way downtown. You don't have to drive for an hour and a half or two hours to get to work. You can have a spot that's clean, well-lighted, with great technology and business reference librarians there — that's a real multiplier for your work as an independent contractor.
The other part of it is the chance for the library and the business reference librarians to help incubate new business ideas. The mid-continent library system outside of Kansas City has helped start 45 small businesses through the library. The chance to be able to help somebody pick an idea, research the idea, workshop the idea, and then take it to market through the library is an amazing thing.
Yes, we're great with education, we're great with community development and the arts, but the business leverage, in small communities and big towns, is the untold story. 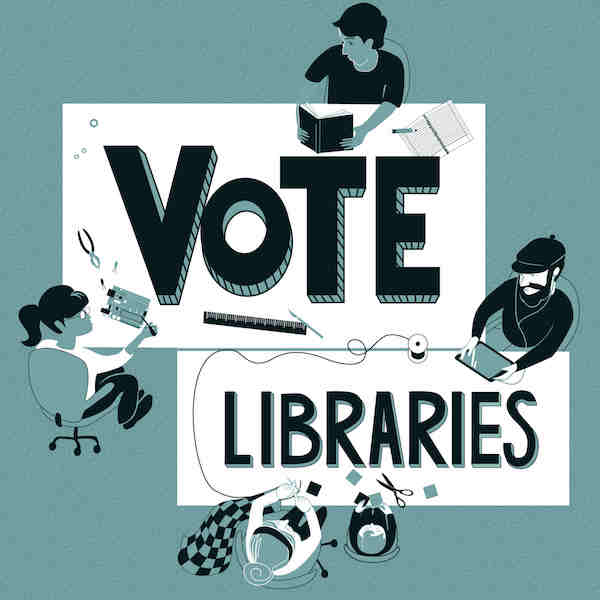 EveryLibrary's vision statement is, "Any library budget measure anywhere should matter to every library everywhere." Graphic by Amanda Lenz for EveryLibrary
What's happening with school libraries that EveryLibrary is involved with? Do they face challenges that public libraries don't?
The idea that any library budget measure anywhere should matter to every library everywhere is our vision statement. At the end of 2015, the No Child Left Behind act, which governed how schools are set up and run around the country, was supposed to be replaced with ESSA, the Every Student Succeeds Act. In that ESSA, the folks at the American Library Association and the American Association of School Librarians got school libraries and school library programs back into the bill. With No Child Left Behind, for the last 15 years, we haven't had school librarians or school library programs in the federal law. So, over the last 15 years, we've seen a lot of school libraries close and a lot of school librarians either get laid off or get reassigned.
With the ESSA change, we've been working with 15-18 state school library associations to help them with their policy lobbying. After 15 years of not having school librarians in federal education laws, our hope is to get school librarian positions and school library programs. Each of the states has to do that work by either April or September of this year. Our focus has been to help them with the policy framework they need to lobby their state board of education, their state school board, their state superintendent of schools, to talk to them about the effective role that school librarians have in the whole life of a child and the important role that effective school library programs have in the success of students from all different backgrounds.
What else should I know about EveryLibrary? Anything you'd like to add?
We are trying to help change the conversation from save libraries to more proactive outreach about libraries to the American public. Our action platform is set up to do things like petitions to help save individual school libraries and school librarian jobs. It's also set up to do letter writing to elected officials at every level of government. It's set up to help individuals who want to do more to support their local library. It's a place where individuals around the country can take some sort of a step to help share the word about libraries or help correct a problem for library funding.
Header image by Juana Medina for EveryLibrary. Follow @CatJohnson on Twitter