Who is the Real Sharing Economy Sell Out? Maybe the Media - Shareable
Skip to content 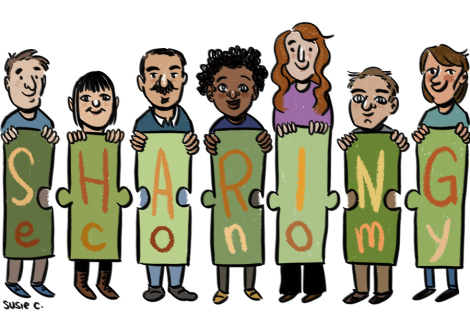 Yesterday Matthew Yglesias of Slate posted, “There Is No ‘Sharing Economy.’”  Well, he’s a little late to the party beating that dead horse. His story’s punch line, an old one, is basically that the sharing economy isn’t sharing, it’s renting (a la  Airbnb, Zipcar, etc.), so the term “sharing economy” should die.

The only thing more tired than the “sharing economy” meme might be this opinion. While there’s truth in what he and many others before him have said, his post throws the baby out with the bath water. It shows a shallow understanding of the economic transformation underway, and this being Slate, with millions of readers, could turn a lot of people away from an important change.

There is something good going on, and if we redirect our attention away from analyzing memes to what’s happening on the ground, we might discover something profound, something worthy of attention because it could be world changing.

So let’s look at car sharing, his point of attack. Yes, it’s true that car sharing is like car rental in that you pay for the time you use a car, whether it’s by the hour or day. However, car sharing is pointed at different consumers for different purposes with different impacts. Car sharing is most often marketed as an alternative to car ownership for urbanites. It fills in a gap in transportation needs that enables more households to go car free or shed a car.

It works. The positive impacts are significant and point to an economic development path with dramatically less consumption and more equity. Let’s look at the stats:

Let’s expand on that last bullet point. Say that San Francisco was able to reduce the number of owned cars in the city to 250,000 from around 500,000 today with the help of car sharing.  How much would that keep in the local economy? Around $2 billion.

That’s a gigantic local economic stimulus package helped by a sometimes depersonalized form of sharing.  Not to mention that less cars in cities means more room for people. So we’re going to dismiss car sharing because the leader, Zipcar, isn't the Kumbaya, kindergarten, what your mother taught you version of sharing that Yglesias is referencing?

Let’s recognize that there’s a spectrum of sharing — some commons based like the Modo car sharing cooperative in Vancouver, some market based like Zipcar, and some in between. Unlike big media, our definition of the sharing economy includes them all, not just the tech darlings.

In any case, we shouldn’t dismiss Zipcar or their ilk out of hand because they aren’t pure sharing. Every cash-strapped, smog-choked city on the planet — and that’s a large and growing number — should be busting ass to help their residents share cars and more (we’re determined to help them too). Even better if done through coops and nonprofits, the form a large number of car and other sharing enterprises already take.

While Yglesias misses the mark on car sharing, he's basically right. We need more real sharing where we own things together. And we should demand more real sharing from for-profit tech companies that claim to be leaders of the sharing economy (how about Airbnb as a coop?).

Yglesias’ big miss is that away from the headlines about the latest tech wonder, a real sharing economy is booming. Member-owned credit unions recently earned record profits, member-owned cooperatives are proliferating modeled off the successes like Mondragon, The White House is getting behind participatory budgeting for local governments, 20 states are considering some form of public banking, open source software is eating the software world, and grassroots sharing projects like seed banks, tool libraries, coworking and hacker spaces are spreading like kudzu.

This economy is substantial. Taken together, credit unions make up the fifth largest bank in the US. Cooperatives employ 100 million people globally (20% more than the Fortune 500) and have 800 million members. Coops span major industries – retail, agriculture, housing, transportation, manufacturing, energy, telecommunications, healthcare, and more. There are over 200,000 open source software projects worth around a half a billion dollars. One study put the value of fair use content at $4.5 trillion, one sixth of the US economy. I’m just scratching the surface of all that we share. The mutualized part of the sharing economy dwarfs all the tech-based sharing startups put together.

Whatever you want to call this economy, it’s the real story. While our civilization approaches economic and environmental collapse, the solutions lay right under our noses. This is arguably the biggest story today as our survival may hinge on how this emerging economy unfolds. The question is whether the mainstream media will bring it to the attention of a public desperate for real solutions. If Yglesias’ latest post is any indication, they will pass it up in favor of click bait to boost ad revenues.

If this post resonates with you, please watch the two-minute video below and consider supporting Shareable's crowdfunder.