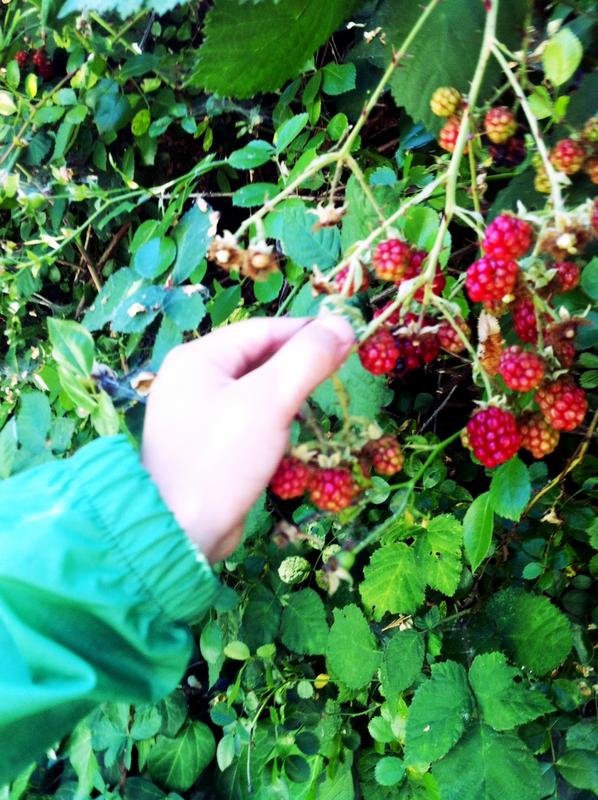 Blackberry bramble grows wild all over our town. Many consider it a menace. It’s invasive, and it will choke everything out and take your fence down in the process. It’s easy to identify, with spreading thorn-covered vines and broad elliptical leaves. Sometime in the late spring, it’s covered with white blossoms that eventually turn into tight, chartreuse clusters that mature until they become soft, darkly purple berries by July or August. It’s hard to buy blackberries: they’re fragile, and so expensive. You pay a king’s ransom for a half-pint container, and by the time you get home, the bottom layer has burst and run with juice, and maybe you’ll find one with a faint moldy fur that quickly overtakes the rest.

I’m not sure why more people don’t pick them. It’s true, you have to keep your eye on them so you don’t miss the window of time after they’re no longer too sour and before the summer sun has finally had its way with them and they’ve become hard, shriveled black husks. There are microclimates, like the broad swath of shade underneath the highway where they ripen more slowly but in far larger numbers, you need to notice that. You also have to be prepared to wrangle with the thorns. It’s not like roses (to which they’re related,) where you can clearly identify the spikes and avoid them if you’re careful: blackberry bramble has those big visible spines too, but they also have a more insidious, fine and imperceptible brand of prickles that seem soft until they’ve covered your forearms with itchy misery.So what I’m saying is, you have to be observant and you have to protect yourself. We kept watch on them every time we’d pass a patch on foot or on our bikes. Over and over, we’d come across new thickets of them hidden along roadsides or beside the trails. You can really get good at spotting them if you know what you’re looking for, and in the spring when they’re blanketed with blossoms, it’s like a patch of melted snow where the sun hasn’t quite reached. We watched, made note, and shouted to each other about what we saw: there’s more here, we need to remember this spot. There’s some pink on the berries now. When the time had come, we piled the kids into the big orange gardening wagon and set off for some of the closer thickets, just to start. We brought jelly jars, but not big ones—big ones would mean too much weight on the bottom layers. Larry and I traded wagon-pulling duty with Rainer, who moaned and complained. It was hot, and we were wearing long-sleeved shirts as armor against the thorns.

When we got to the best, most abundant spot, we propped a long wide plank up against the bramble to give access to the higher areas. Everyone had a jar, and we wore layers of latex surgical gloves and stripped them off as they became shredded. We worked quietly, some happy buzzing but mostly just commenting on finding a good one or avoiding a bee. Molly worked too. Everyone ate about one for every three picked, which was the tax we exacted for our labor. We talked a little about what we’d do with them: Rainer wanted to freeze a few quart bags for smoothies. Molly does most of the chicken chores, so she wanted them to have the ones that weren’t quite ready. “Dan’s got peaches ripening,” Larry said. “I’ll bring a few jars to trade.”

Some teenage boys passed us on the other side of the busy street. They asked us what we were picking, and then if they could come join us. I asked them, “Did you grow up here?” and was surprised when they said yes, they had. I wondered: do their parents not care about blackberries? Because you’d have to actively not care. Here were blackberries! So cherished that they cost about the same as caviar. They’re available for such a short time, and specific to this part of the country. There aren’t many places on earth where something so succulent comes at such low cost: the only price you pay is in scratched up hands and stained fingertips. 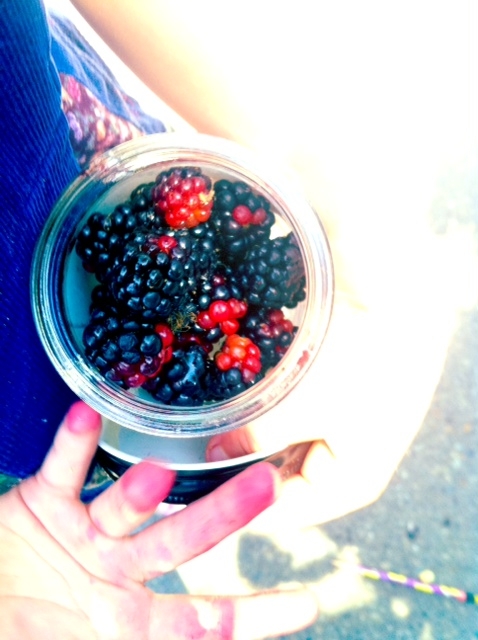 We worked for a few hours, long enough that the teens who joined us mounted their skateboards, leaned back, and rolled off with lackadaisical efficiency. They didn’t say goodbye, but it was a benevolent parting, and it was clear we had earned a little of their admiration. After that, we got quieter and more focused as it became harder to find worthy berries. Rainer looked up at me and said something after awhile; I was busy and lost in thought, and I couldn’t be sure I heard her right. I had her repeat it: “I love our life,” she said. “I’m so glad we’re doing this.” And I am glad that she won’t have to grow up in northern California without ever having learned about picking blackberries.