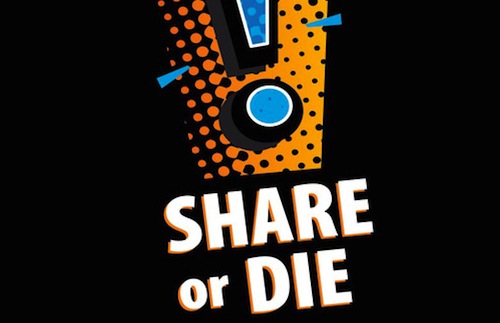 In Shareable’s anthology, Share Or Die: Voices of the Get Lost Generation in the Age of Crisis, dozens of people contributed stories, art and insights about what life is like for young people today. An entertaining, revealing, inspiring and at times sobering collection, the book takes on complex issues including college debt, career confusion, education, unemployment and underemployment. It also presents ideas on creating a satisfying life, being of service, creating sustainable lives and building resilient communities.

As a whole, Share Or Die sheds light on the immense potential of the millennial generation and nurtures the notion that living outside of the school-debt-consume-debt treadmill can be key to creating a meaningful life.

Many of the stories leave the reader wondering what happens next so we decided to find out. We contacted several of the contributors to find out what they’re doing now and how things have changed since the book’s release.

Nine – Take It and Leave It: Inside the Pack of a Modern Nomad 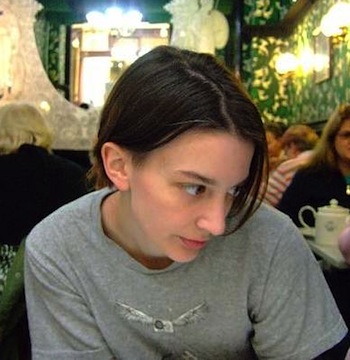 When Nine detailed the contents of her backpack that had been “around the world and back,” she provided a glimpse into a rich and exciting, nomadic lifestyle lived with minimal stuff.

“I found that I'm good at adapting quickly to a diverse range of situations and I feel at home pretty much anywhere,” Nine says. “Having said that, I've been more and more drawn to radical folks and politics, and with that has come the greatest sense of community. With all this pinballing around the world on the cheap,” she continues, “saying goodbye to people is not hard, because I feel confident I'll see them again soon. Saying goodbye to animals, however, can make me absurdly sentimental.”

Nine has kept her goal of visiting a minimum of three new countries per year. She’s gotten by in French, Spanish, German and Polish, and is now learning Malay. She’s gone snorkelling and canoeing, picked up hitch-hikers, gotten tear gassed, been helped out while stranded by a friend who subsequently fled to her own country to seek asylum, and fallen in love.

When asked what advice she would offer to people who want to take up the global nomad life she offers these tips:

Malcolm Harris – The Get Lost Generation and Bad Education
thenewinquiry.com

Malcolm Harris played a key role in getting Share Or Die published. He edited it, recruited most of the writers, wrote the introduction and contributed an article. In the book, Harris poses a question: is the Lost Generation one of purposeful wanderers or lost potential? He also draws comparisons between the student debt bubble and the housing crisis and he breaks down several of the issues plaguing higher education.

Today, Harris is working with “some great folks” at a literary magazine called The New Inquiry, which he sees as an extension of his Share Or Die interests. He’s still concerned with youth and the excess of potential energy and talent that's there. He’s starting work on a larger project on student debt; a complex issue that he has a good handle on.

“The biggest, new understanding I've come to with regard to student loans is about how the bubble is secured,” he says. “I used to think it was just investor confidence, but now I know it has as much to do with the specific set of laws that govern student debt. As long as debtors have to pay it back — and student debtors do, there's no escape — that lenders, if they're big enough, are empowered to just pretend the money's there until it is.” He adds, “It's more stable than I originally believed it to be, and maybe for that reason, more dangerous.”

Harris says it’s hard to say things have gotten anything other than worse for the Lost Generation pointing out that we haven't seen much substantial change on the underlying factors. “But if you're hopeful,” he says, “every year forward is a year closer to the point where quantitative change morphs into a qualitative shift.”

The response he most often receives about Share Or Die is, “a happiness that the issues about youth, employment, fitting into the world and the economy, are being discussed openly and earnestly.” He says that a lot of the outlets that focus on young people and their issues tend toward the ironic, but that Share Or Die is “realistic and imaginative at the same time.” 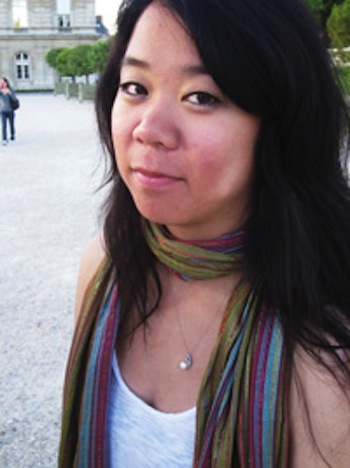 In "Unprepared," Sarah Idzik shares her struggles with finding a job and a sense of home as a recent college graduate. After college, she found herself in unfulfilling, paycheck-to-paycheck jobs that left her feeling “utterly crushed.” At the end of her story, she was planning to leave Chicago to build community and start over.

Today, Idzik is, as she puts it, “anticlimactically, still in Chicago.” But, she found a job in higher education that provides opportunities to meet new people and work with her peers. She has allowed herself to “settle in a bit (she bought a car registered in Illinois),” but she’s still uncertain what her future will bring.

“I still feel plenty confused and conflicted about the future,” she says. “Particularly with so much upheaval and change happening around me all the time–the byproduct of working with people who are mostly in their early 20s. But I at least don't feel like I can't buy a jar of paprika at the grocery store because I don't know if I'll have enough time to use it.”

She says that a lot of people around her feel anxiety about where they’re going and what to do next. “Being out of college sucks for everyone,” she says. “But there’s a comforting sense of community in that knowledge.”

If she could go back in time, Idzik says she would visit her college self to “kick her own ass” into thinking at least a little bit about the future. She would advise herself to take advantage of what little resources were available, to do informational interviews and get internships and try things out, so that she would be a little less lost now.

She says that she wishes she had better resisted the temptation to turn her article into a “tidy narrative” at the end of it.

“It undercut the theme that I am trying so hard to live by,” she says: “That happiness and contentedness are self-created and self-enforced; that this is not a story with a buildup and a climax and a denouement and an arc; that the road is twisting and winding and improvised, and that a change of scenery does not guarantee a positive change in mental and emotional state.” 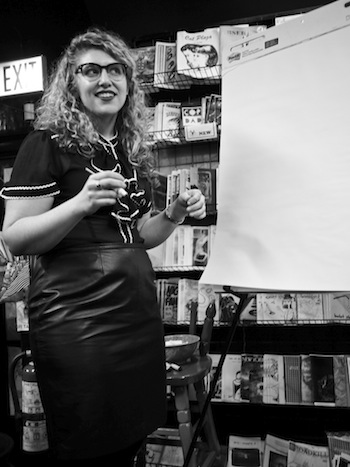 A humorous and poignant story, "Who Needs An Ivory Tower" illustrates Brager’s process of applying to and being rejected by eight doctoral programs. Since Share Or Die she has re-applied and was accepted. Today, she’s in a PhD program in Women’s and Gender Studies, which keeps her busy. But, she still creates zines and comics and is expanding into other multimedia work.

She says her flowcharts represent “two wildly vacillating and sometimes co-existing emotional poles” that people, including herself, experience once they leave college. She describes these poles as “equally cynical and earnest, hopeful and pessimistic.”

“We are told that we have no prospects and simultaneously that we will be the exception to the rule; that we can claw our way to the top,” she says. “I have always questioned what success within the bounds of this neoliberal society would mean; whether that should really be the goal in the first place.”

“The myth of the American Dream, as sold to us, has never been a particularly sustainable possibility,” she says. “But some of the alternatives that we are relying on are creating a kind of feedback loop; a desperate attempt to scaffold an alternate route to the American Dream, to individualistic financial security, social capital, etc.”

While Brager is grateful for the “attempt at kinder capitalism,” she doesn’t think that the model really shifts anything. She references scholar and activist Liat Ben-Moshe saying, “The problem of the terminology of DIY is the focus on yourself in a project that is really about doing it together.”

When asked if there’s anything she’d like to add Brager says, “Dear Everybody: Hire artists! Support independent artists! Also, art is labor, pay your artists a fair and living wage!”

Robin – Every Guest a Host: Inside a Nomad Base
nomadbase.org 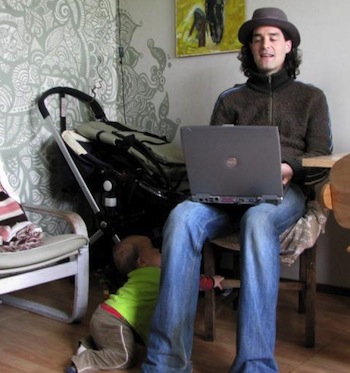 When we last heard from Robin, he was the “host of hosts” at Casa Robino, a nomad base in Amsterdam. A place for travelers to stay, meet people, and contribute, Casa Robino was, essentially, Robin’s apartment which he opened to travelers. These days, however, Casa Robino is home to just three, including a baby.

After a brush with eviction, Robin had an opportunity to expand Casa Robino. A housing inspection led to questions about what Robin was doing and after much discussion about the philosophies of living together and the fact that no money was being exchanged, the authorities offered to provide Robin with a larger building more appropriate for hosting travelers. Robin was torn.

“My first thought was ‘Jackpot!,’” he says. “After years of building up Casa and a hosting-culture, after years of giving and spreading ideas, does this mean we are given the opportunity to let it grow even bigger? I felt delighted and honoured.”

But another part of him wondered whether he wanted to continue. In the end, he decided to let go of being the host of hosts.

“This role, especially in my own home, comes with a burden,” he says. “Being a social worker, working 24 hours a day, seven days a week for four years, was long enough. I had lost perspective on my own life,” he continues. “I had become a prisoner of my own ideals, of my own institution, and I knew I would always remain that prisoner if I was not to let go of the prison right now and let it pass.”

There was another factor in Robin’s decision: he had fallen in love and wanted to live with just his partner. Two months later, they found out they were pregnant. And so began a drastic transition from nomad base to family home. As Robin puts it, “The hospitality house, well known for its radical approach to hosting, used to be filled with travelers. Now, it’s filled with toys and there is a mom breastfeeding her baby.”

Robin still meets plenty of people through De Peper, a vegan collective that he’s part of. He still dumpster dives and has created Dumpsterdam.nl, a political-art project around waste and how to live off of it.

His online platform Nomadbase.org is still active, attracting people around the world with similar initiatives and shared experiences. Part of Robin’s vision for the platform is to have a social network of places, possibly co-funded and connected by the same people who live and travel between them, linking different practices of living together. Perhaps then Robin and his family will hit the road.

“Maybe one day me and my family would be part of such a network,” he says. “And who knows, by then there may be even more infrastructure in place to sustain new tribes of nomadic, independent travelers.”

Share or Die is available in paperback, for Kindle, for iPad and for free