When a Stranger Feels Too Strange - Shareable
Skip to content 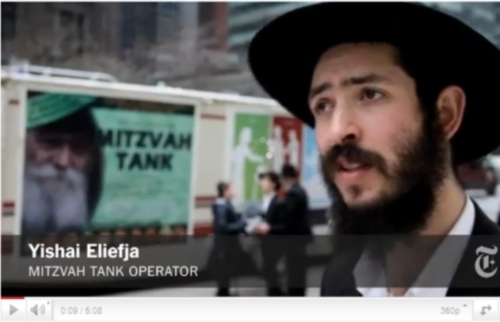 A Facebook friend posted this video on her status update. It opens showing this man and others asking passersby, "Are you Jewish?" He is member of the Lubavitch group of Hasadic Jews who use their "mitzvah tank" as a form of outreach.

I am Jewish. I watched the 5-minute video, and I had mixed feelings. (Apparently, I wasn't alone: Another Facebook friend, admitted that once, when she actually encountered the mitzvah tank, she denied being Jewish!)

I don't know how I'd react in person, but watching the video I feared that the Lubavitchers are potential beacons for anti-Semites. They proselytize an extreme form of Judaism, one that dictates a certain look and that separates men and women and seems (at least to my eyes) to put women on a lower level than men. I worry that people outside New York who see this video will think that this is what "Jewish" is, much in the same way some gay men worry that people in the red states will think drag queens is what "gay" is (a concern that dates back 25 years, according to Larry Kramer's Normal Heart).

On the other hand, what is so wrong about being observant, having rules to follow? That works for some people. Who am I to judge them? I close my mind, though, because their "look" speaks volumes to me; I see them as stereotypes. But if I imagine them without the black coats, beard, yarmulka (skull cap),and payos (sidelocks), the young men who man these "synagogues on wheels" seem like good guys. When a man complains that their music is too loud, they respond immediately, apologizing, being friendly, asking if he's Jewish, wishing him well.

I'm more willing to open my mind these days and to question my knee-jerk reaction to certain "types," as my mother used to call them. In part, it's because I spent three years researching and writing about the importance of allowing different types of people into your life–and turning them into consequential strangers. More recently, though, I wrote a 3-part series on "collaborative conversation" for Shareable. It opened my eyes to the possibilities (see Part 1) and the problems of communication (Part 2) — and how we might move past them (Part 3).

Clearly, some strangers feel too strange; we're reluctant or fearful in their presence. But we reap immeasureable benefits when we move past judgments and open ourselves to difference. So, if I happen to encounter ultra-Orthodox Jews manning a mitzvah tank, I'll step inside and work at understanding rather than dismiss them. I might learn something about them–and about myself as well.