What Things Need to be More Shareable? - Shareable
Skip to content 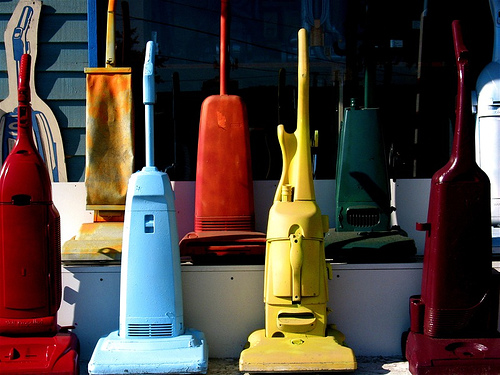 "One of top things you can do to make your life a bit greener is cut down on stuff," writes Matthew McDermott at Treehugger. "Making it more difficult is that some of the things that are really useful only get used every so often… You can now easily rent cars by the hour, and more cities are establishing bike share programs, but programs to rent smaller items aren't as prominent, nor as convenient."

He offers a "personal list" of five things that he wishes were more shareable, which provided me with food for thought. For example:

Air Conditioners & Fans: If you live in a building with central cooling this may not seem like a big deal to you, but if you live in someplace where storage space and window area is at a premium neither leaving your air conditioner in place all winter, nor storing it out of the window seems like particularly attractive options. Ditto floor fans taking up room in some closet all winter. If you could rent them you could always be assured of having a well-serviced model (not that fans need much service…) and not have to worry about storing it when not in use. Perhaps the costs would be such that it didn't make sense, but for three-quarters of the year when I'm staring at my unused air conditioner I can't help but think it would be better to rent than own.

Vacuum Cleaners and Other Household Gadgets in My Building: Here's another space waster: Vacuum cleaners, carpet and floor cleaners. You can rent the latter but not the former, but wouldn't it be better to have some community- or building-based rental system so that these items are around when you need them but not everybody has to own one? Perhaps several per building would work out well. Much like building laundry rooms, there might be some conflicts in scheduling but that's a minor logistical concern. Have them set up where you pay a deposit on a card, insert the card into a slot in the storage locker where they are kept and get the deposit back when you return them.

Large Luggage: I try to travel light whenever possible, but there are some times and some seasons where traveling light is more difficult and for these times I wish I could hire that large rolling suitcase rather than paying out for one that most times (even for the length of the year sometimes) it just sits in my closet collecting dust. In some places you can rent backpacking gear, but basic large luggage doesn't seem to be so common. I admit it's sort of creepy using someone else's luggage, that's been who knows where—especially considering that bedbugs are again a problem in a growing number of places—but since someone who rents out this sort of thing would have their reputation based upon cleanliness, any creepiness would ideally be only in people's heads.

What would I like to see become more shareable? It's a surprisingly challenging question, because I don't think our American minds are designed to readily imagine stuff as shareable. Plus, my needs are simple; I don't have a lot of stuff, period.

If I had to pick one item off the top of my head, it would probably be kid games and toys, which a) crowd our urban apartment; b) easily lose their charm for my son; and c) are often accompanied by wasteful packaging.

These are already shared among our immediate circle of families, but how cool would it be if our local library allowed us to check out toys and games as well as books? The toys would be beaten up, of course, but this has nothing to do with the "tragedy of the commons" and everything to do with the ferocious passions of childhood. In a weird way, I think the library toys would be treated more respectfully than private ones.

What would you like to see become more shareable?