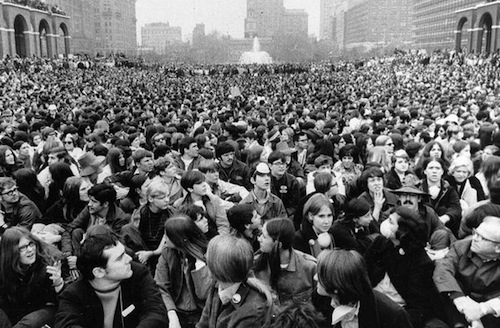 The first Earth Day on April 22, 1970 was epic. The brainchild of Gaylord Nelson, a U.S. Senator from Wisconsin, it was the first event of its kind and it sent a game-changing ripple of awareness and activism through the country. It jump-started the green movement, brought environmental concerns to national attention and unified citizens, academics, scientists, conservationists, politicians and students under one banner. But the real brilliance of the original Earth Day was that it was a decentralized, get-in-where-you-fit-in event that activated millions of people from nearly all walks of life. It's estimated that 35,000 people gave speeches.

As we approach the second annual Global Sharing Day on June 2nd, Earth Day 1970 can serve as a reminder that it’s not startups or government or big organizations that will bring sharing mainstream, but everyday people. Inspiring ordinary people to action is what will bring about positive change. This is what Earth Day 1970 did.

From Alaska to the deep South, people were encouraged to celebrate Earth Day in whatever ways addressed their unique environmental concerns. Though there were leaders and organizing committees who offered ideas to those who wanted them, Nelson and his team got the Earth Day ball rolling, then did something brilliant: they got out of the way. They relied on individual communities to celebrate the day as they saw fit and trusted that the result would be something transformative.

“Part of the genius of the first Earth Day,” says Adam Rome, author of the book The Genius of Earth Day: How a 1970 Teach-In Unexpectedly Made the First Green Generation, “was that Gaylord Nelson was wise enough not to make everyone try to follow one plan. Thousands of people were able to take ownership of the event and think very imaginatively about what they could do.”

The beauty of this approach was that people created events that reflected the specific needs and concerns of their communities. In New York City, two streets in the heart of Manhattan were temporarily closed to cars and opened to an estimated 250,000 Earth Day celebrators; in Miami, eco-activists poured yellow dye into sewage treatment plants to show where sewage dumped into waterways goes; Birmingham, Ala. saw a week-long series of talks and events aimed at pressuring local business owners and politicians to address the community’s air pollution crisis; a group of people in California walked from Sacramento to Los Angeles, talking to people along the way about pollution, recycling, oil spills, deforestation and more; Philadelphia stretched its schedule of speakers and events over several days, creating the first Earth Week; people in Fairbanks, Alaska organized a series of teach-ins about a proposed oil pipeline that would cut through the wilderness.

From concerts and family-friendly gatherings in parks to lectures, teach-ins and protests, Earth Day spurred people to act but didn’t tell them how. The result was that word spread far and fast and the nation saw over 20,000 unique Earth Day events.

Amazingly, in an era before Facebook and Twitter were even shadow of a thought, Earth Day went viral and united millions of people under its banner. But the thing that allowed Earth Day to spread so far and make such a tremendous impact was that the banner people were unified under was not one of agreed-upon actions, but an agreement that there was an environmental crisis that needed to be addressed. The call was not to take a specific action, but to take action.

People had different ideas about how to solve pressing environmental problems. Some had radical critiques of American consumerism and capitalism and felt that a societal overhaul was in order; some felt that the problems could be solved with new legislation; some saw community action such as lakeside cleanups and local teach-ins as the best approach.

“Ultimately, since the problems were so many and they had different roots, they could be approached in different ways,” says Rome. “That turned out to be a great strength. People could go off and do things that were really quite important and constructive without having to agree with what other people were doing.”

Earth Day 1970 was not the beginning of environmental awareness and activism. Before Earth Day, there were conservationists working to protect water, wildlife and land; scientists studying the effects of pollution on ecosystems; students organizing and protesting around environmental issues and everyday people working to clean up their backyards. But, they were primarily working in their own realms. Earth Day unified all these groups and causes and created a focused push of awareness, action and community.

One reason that Earth Day 1970 was so widespread was that–in large part due to Nelson’s position as a Senator–mainstream media picked up the story. Unlike today, where there are more news outlets than one can shake a smartphone at, in 1970 there were far fewer sources of news and information and if key outlets picked up a story, smaller papers followed suit. News of Earth Day was featured in Time, Newsweek, the New York Times and more. From there, it trickled into the local news in towns across the country. From the outset, these towns were encouraged to create their own Earth Day events.

Activating communities of all shapes and sizes brought the environmental crisis to public attention and also demonstrated the need for organized approaches to solving it. In the wake of Earth Day came the creation of eco-focused community centers and educational programs, environmental studies classes and departments, local activism networks, environmental nonprofits, and government organizations including the Environmental Protection Agency. Earth Day inspired many people to shift their career path to focus on the environment.

“The most impressive and important part of Earth Day,” says Rome, “was the thousands and thousands of individuals who said, ‘This is what I want to work on.’ There really were no career paths for people who were interested in addressing environmental issues back then,” he continues. “They had to be very entrepreneurial about how they personally, given their own abilities and interests, could make a difference.”

The parallels between the first Earth Day and sharing events, including Global Sharing Day are striking. Many of the concerns are the same: the habitability of the planet; the massive environmental problems we’re leaving future generations; the unsustainability of our insatiable consumer culture. As the sharing movement makes its way into mainstream society there are gems of knowledge that can be gleaned from the approach that Nelson took in 1970; primarily the fact that activated, imaginative, empowered individuals and communities have a power that can’t be induced by top-down approaches.

Organized sharing events present great opportunities to demonstrate the strength and passion of a bottom-up movement. The participatory aspect is what drives the sharing movement and it is what will encourage mainstream culture to embrace it.

As Rome points out, it helps to have some focal point, whether a person or a group, to rally people around an issue, or way of thinking, but the challenge for the sharing movement at large is to be like Gaylord Nelson: inspire action then get out of the way.

“The idea that you don’t try to prescribe what everyone needs to do, that you don’t have one overriding agenda is critical,” says Rome. “You have to let your idea go where it goes. If people want suggestions about what they can do, great. But it’s even better,” he adds, “if people come up with their own ways of thinking about it and doing things.”

For more information about the first Earth Day and the transformative effect it had on the environmental movement, pick up Adam Rome's book, The Genius of Earth Day: How a 1970 Teach-In Unexpectedly Made the First Green Generation. Purchases made through the provided affiliate link support Shareable, a nonprofit. The book may also be available at your library or independent bookstore.