What Makes a College Bike Friendly? - Shareable
Skip to content 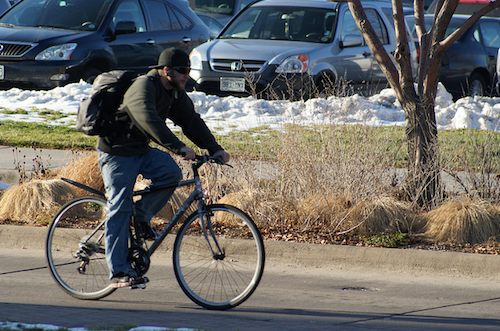 Trying to decide where to attend college? Weighing the pros and cons of different schools? Traditionally, a school’s academic ranking  weighs heavily in the decision, but a college’s bicycle friendliness may now become a factor.

The League of American Bicyclists awards deserving schools platinum, gold, silver or bronze status through its Bicycle Friendly University program. Both a recognition and promotional tool, the BFU “provides the roadmap and technical assistance to create great campuses for cycling.”

Schools are judged on the “Five E’s”: engineering, education, encouragement, enforcement and evaluation and planning. Schools must demonstrate achievement in all five areas to be considered for the award and the more significant the achievements, the higher the rating.

Recently, the BFU welcomed nine new schools, including Yale (bronze) and Princeton (bronze), into its ranks bringing the total number of colleges designated as bicycle friendly to 44 across 25 states. So far, Stanford is the only school that has attained platinum status and only two schools, UC Davis and UC Santa Barbara are the only gold level members, but lots of other schools are hot on their heels. There are 16 silver schools, 25 bronze and a handful of honorable mentions.

Here’s a roundup of some of the top-ranking schools along with the features that make them bicycle friendly. See the complete list of schools here and a BFA map here.

Stanford – Platinum
Boasting an abundant supply of bike rack compounds, bike lockers, clothing lockers and showers, along with educational and safety resources that are tailored different levels of cyclist, from beginner to experienced and an “extensive investment in bike infrastructure over the past 10 years,” Stanford is leading the way in bicycle friendliness.

UC Davis – Gold
With a long history of bike advocacy, UC Davis has bike racks at every building, a network of bicycle paths, a core campus that is closed to motor vehicles, an on-campus bicycle shop, bicycle crossings of major roadways, an emphasis on bicycle safety and an infrastructure that prioritizes the needs and safety of cyclists.

UC Santa Barbara – Gold
UC Santa Barbara has twice as much bike parking as it does car parking. Committed to prioritizing bicyclists, the university has the infrastructure, incentives and educational tools to make UCSB a leader in bicycle friendliness. The campus has a fleet of communal bikes, a ban on parking permits for those living within two miles of school and a bike kitchen and repair shop where students can learn to work on their own bikes. Students that receive a bicycle citation can attend a free education class instead of paying a fine.

Boise State University – Silver
Advocates of alternative transportation, Boise State University participates in people-powered programs including a distance challenge, a bike to work challenge and a regional event called May in Motion. The school has a Cycle Learning center and offers a bike shop, rentals, sales and secure bike parking and lockers.

Colorado State University – Silver
Known for supporting green initiatives, Colorado State University in Fort Collins has an administration that is focused on reducing its carbon footprint. Driven largely by student interest, the school has a Campus Action Plan that includes improving its bicycle infrastructure including paths, lockers, racks and incentives. The school has a Campus Bicycle Advisory Committee that works, through various projects, programs and regulations, to ensure the safety of cyclists and establish the campus as a green, bike friendly place that meets the high, green standards of the Fort Collins community. 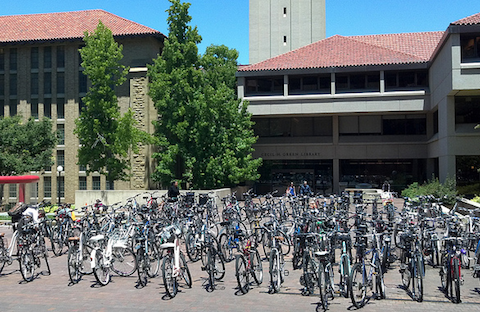 Georgia Institute of Technology – Silver
With an emphasis on theft-reduction, bike lane creation, roadway markings and bike parking, the Georgia Institute of Technology has, in recent years, prioritized campus cyclists’ needs and safety. A school that prides itself on innovation, some of its graduates collaborated to create ViaCycle, a bicycle sharing program that started at GT but has been adopted elsewhere, including a program in Las Vegas.

University of Minnesota – Silver
Aiming to make the campus a hub for bicyclists, pedestrians and transit users, the University of Minnesota focuses on making cycling safe and easy for students, faculty and staff. The school has parking for 9,000 bikes and has secured Federal Non-Motorized Transportation Pilot funding to build a university bike center and implement a radio frequency identification system to identify and validate bike trips; a program that is being looked at by surrounding businesses as a way to validate the commuter trips of their employees.

University of Oregon – Silver
Situated in the gold-level status town of Eugene, the University of Oregon has a bike loan program for both short- and long-term loans, it replaced all of its bike racks with cutting-edge designs, it has well-marked bike paths and lanes, it has a free maintenance program and covered parking for bikes. Much of this was paid for by a $300,000 state bond that was funded by motor vehicle parking revenues. The school also offers an expanding bicycle education curriculum and advocates for student involvement in local transportation issues. A student group, LiveMove brings cycling and transportation guest speakers to campus and raises funds to send students to national events including the Transportation Research Board and ProWalk/ProBike.

University of Washington – Silver
With an emphasis on end-of-trip facilities, the University of Washington offers lockers, cages, racks a rooms, nearly half of which are covered. The school partners with a local bicycle club to provide classes and instructional labs, it offers maintenance and repair classes, has partnered with the local transit department to get bike racks onto buses and it offers discounts and incentives to cyclists. Bicycle events, including Ride in the Rain and Bike to Campus month are increasingly popular with students and staff.

University of Wisconsin – Silver
The University of Wisconsin offers compressed air at several locations, porous concrete slabs under bike racks to facilitate snowmelt, and bicycle cages. The school prioritizes outreach to students, offering bike maps, education and info packets to new and interested students. The school has capped the number of parking spaces for cars and those who are eligible for a parking pass (generally not students), the passes are relatively expensive running $800-$1100 per year. Bike parking is abundant and free or inexpensive. Through the Emergency Ride Home program, bicycle commuters are offered three free cab rides every six months.