What Happens If We Open Streets for People? - Shareable
Skip to content 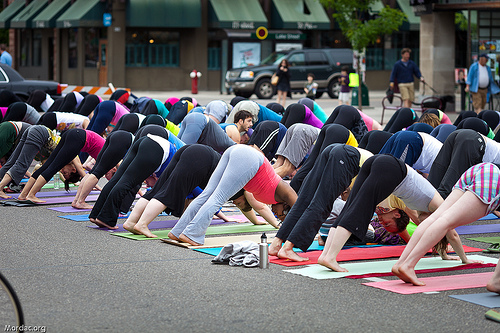 Imagine diverting traffic from a major street in your neighborhood, then welcoming families on bikes, families on foot, babies in strollers, people in wheelchairs, toddlers on training wheels, grade schoolers on skateboards, teenagers on single-speeds, hipsters on fixed gears, grandparents on recumbents, couples arm-in-arm and even yoga classes in the middle of the road. What would happen?

If your neighborhood is anything like mine—which I am sure it is—get ready for a massive outbreak of smiles.

A band at the south end of the route played up-tempo hymns on the lawn of Bethlehem Lutheran Church while the north end featured a DJ blasting pop hits. The Cadillac Kolstad blues band performed up and down the avenue on the back of a pedal-powered cart, complete with upright piano.

People work up an appetite biking and strolling, so restaurants set up shop on the sidewalk serving hamburgers, Caribbean stews, pastry and organic sandwiches, along with free samples of locally-brewed soft drinks and beer. The Bull Run coffee shop reported that its sales were double of any day since it opened this spring. A music store carted instruments into the street to inspire budding young Bob Dylans and Princes (both of whom launched their careers in Minneapolis).

Mayor R.T. Rybak surveyed the scene from a bicycle seat with a wide grin, telling everyone he met, “This is fantastic!”

Colin Harris, a volunteer with the Minneapolis Bicycle Coalition who was a lead organizer of the event, worked with city officials for 18 months to make sure it came off without a hitch. “About five minutes after the event closed,” he said. “I got a call on my cell phone from one of the officials with some good suggestions on what to do next time. I took that as a sign there will be more.” The response from the business community, he added, “was overwhelming positive”.

Harris’s advice for folks wanting to do the same thing in their own town is to start planning early and reach out to neighborhood groups and local businesses. “It’s important that everyone feel involved.”

Closing off streets for the enjoyment of people is a well-tested idea, which happens every Sunday in cities across Colombia. Bogota, the nation’s capital, has been doing it since the 1970s and now sees as many as 2 million people (30 percent of the population) flowing into 75 miles of open streets for the weekly Ciclovia (which means “bike path” in Spanish) celebration.

Adapted from a story originally appearing on the People for Bikes website.