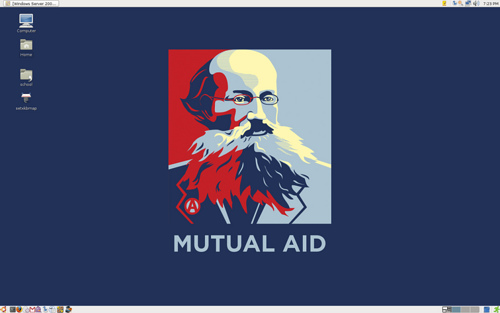 On February 8, 1921 twenty thousand people, braving temperatures so low that musical instruments froze, marched in a funeral procession in the town of Dimitrov, a suburb of Moscow. They came to pay their respects to a man, Petr Kropotkin, and his philosophy, anarchism.

Some 90 years later few know of Kropotkin. And the word anarchism has been so stripped of substance that it has come to be equated with chaos and nihilism. This is regrettable, for both the man and the philosophy that he did so much to develop have much to teach us in 2012.

I am astonished Hollywood has yet to discover Kropotkin. For his life is the stuff of great movies. Born to privilege he spent his life fighting poverty and injustice. A lifelong revolutionary, he was also a world-renowned geographer and zoologist. Indeed, the intersection of politics and science characterized much of his life.

His struggles against tyranny resulted in years in Russian and French jails. The first time he was imprisoned in Russia an outcry by many of the world’s best-known scholars led to his release. The second time he engineered a spectacular escape and fled the country. At the end of his life, back in his native Russia, he enthusiastically supported the overthrow of the Tsar but equally strongly condemned Lenin’s increasingly authoritarian and violent methods.

In the 1920s Roger N. Baldwin summed up Kropotkin this way.

Kropotkin is referred to by scores of people who knew him in all walks of life as “the noblest man” they ever knew. Oscar Wilde called him one of the two really happy men he had ever met…In the anarchist movement he was held in the deepest affection by thousands—“notre Pierre” the French workers called him. Never assuming position of leadership, he nevertheless led by the moral force of his personality and the breadth of his intellect. He combined in extraordinary measure high qualities of character with a fine mind and passionate social feeling. His life made a deep impression on a great range of classes—the whole scientific world, the Russian revolutionary movement, the radical movements of all schools, and in the literary world which cared little or nothing for science or revolution.

For our purposes Kropotkin’s most enduring legacy is his work on anarchism, a philosophy of which he was possibly the leading exponent. He came to the view that society was heading in the wrong direction and identifying the right direction using the same scientific method that had led him to shock the geography profession by proving that the existing maps of Asia had the mountains running in the wrong direction.

The precipitating event that led Kropotkin to embrace anarchism was the publication of Charles Darwin’s Origin of the Species in 1859. While Darwin’s thesis that we are descended from the apes was highly controversial, his thesis that natural selection involved a “survival of the fittest” through a violent struggle between and among species was enthusiastically adopted by the 1% of the day to justify every social inequity as an inevitable byproduct of the struggle for existence. Andrew Carnegie insisted that the “law” of competition is “best for the race because it insures the survival of the fittest in every department.” “We accept and welcome great inequality (and) the concentration of business…in the hands of a few.” The planet’s richest man, John D. Rockefeller, bluntly asserted, “The growth of a large business is merely a survival of the fittest…the working out of a law of nature.”

In response to a widely distributed essay by Thomas Huxley in The Nineteenth Century, “The Struggle for Existence in Human Society,” Kropotkin wrote a series of articles for the same magazine that were later published as the book Mutual Aid.

He found the view of the social Darwinists contradicted by his own empirical research. After five years examining wildlife in Siberia, Kropotkin wrote, “I failed to find – although I was eagerly looking for it – that bitter struggle for the means of existence…which was considered by most Darwinists…as the dominant characteristic – and the main factory of evolution.”

“The animal species, in which individual struggle has been reduced to its narrowest limits, and the practice of mutual aid has attained the greatest development, are invariably the most numerous, the most prosperous, and the most open to further progress. … The unsociable species, on the contrary, are doomed to decay.”

He spent the rest of his life promoting that concept and the theory of social structure known as anarchism. To Americans anarchism is synonymous with a lack of order. But to Kropotkin anarchist societies don’t lack order but the order emerges from rules designed by those who feel their impact, rules that encourage humanly scaled production systems and maximize individual freedom and social cohesion.

In his article on Anarchy in the 1910 Encyclopedia Britannica Kropotkin defines anarchism as a society “without government – harmony in such a society being obtained, not by submission to law, or by obedience to any authority, but by free agreements concluded between the various groups, territorial and professional, freely constituted for the sake of production and consumption…”

Mutual Aid was published in 1902. With chapters on animal societies, tribes, medieval cities and modern societies, it makes the scientific case for cooperation. Readers in 2012 may find the chapter on medieval cities the most compelling.

In the 12th to 14th centuries, hundreds of cities emerged around newly formed marketplaces. These marketplaces were so important that laws embraced by kings, bishops and towns protected their providers and customers. As the markets grew, the cities gained autonomy, and organized themselves into political, economic and social structures that to Kropotkin made them an instructive working model of anarchism.

The medieval city was not a centralized state. It was a confederation, divided into four quarters or five to seven sections radiating from a center. In some respects it was structured as a double federation. One consisted of all householders united into small territorial units: the street, the parish the section. The other was of individuals united by oath into guilds according to their professions.

The guilds established the economic rules. But the guild itself consisted of many interests. “The fact is, that the medieval guild…was a union of all men connected with a given trade: jurate buyers of raw produce, sellers of manufactured goods, and artisans – masters, ‘compaynes,’ and apprentices.” It was sovereign in its own sphere, but could not develop rules that interfered with the workings of other guilds.

Four hundred years before Adam Smith, medieval cities had developed rules that allowed the pursuit of self-interest to support the public interest. Unlike Adam Smith’s proposal, their tool was a very visible hand indeed.

This mini world of cooperation resulted in remarkable achievements. From cities of 20,000-90,000 people emerged technological as well as artistic developments that still astonish us.

Life in these cities was not nearly as primitive as the Dark Ages to which our history books assign them. Laborers in these medieval cities earned a living wage. Many cities had an 8-hour workday.

Indeed, Kropotkin writes, “the more we learn about the medieval city, the more we are convinced that at no time has labor enjoyed such conditions of prosperity and such respect as when city life stood at its highest.”

Mutual Aid is rarely read today. No one remembers Petr Kropotkin. But his message and his empirical evidence, that cooperation, not competition, is the driving force behind natural selection, that decentralization is superior to centralization in both governance and economies and that mutual aid and social cohesion should be encouraged over massive social inequity and the exaltation of the individual over society is as relevant to the central debates of our time as it was to the debates of his time.

It would be salutary for the world to rediscover his remarkable writings, all of which are freely available online, and revisit his philosophy.

David Morris is co-founder and vice president of the Institute for Local Self-Reliance in Minneapolis, Minnesota and directs its Defending the Public Good Initiative. He wrote this for OnTheCommons.org , a Shareable partner that focuses on the commons.

David Morris is co-founder and vice president of the Institute for Local Self-Reliance in Minneapolis, Minnesota and directs its Defending the Public Good Initiative. His books include “The New City-States”.

David Morris is co-founder and vice president of the Institute for Local Self-Reliance in Minneapolis, Minnesota and directs its Defending the Public Good Initiative. His books include “The New City-States”.