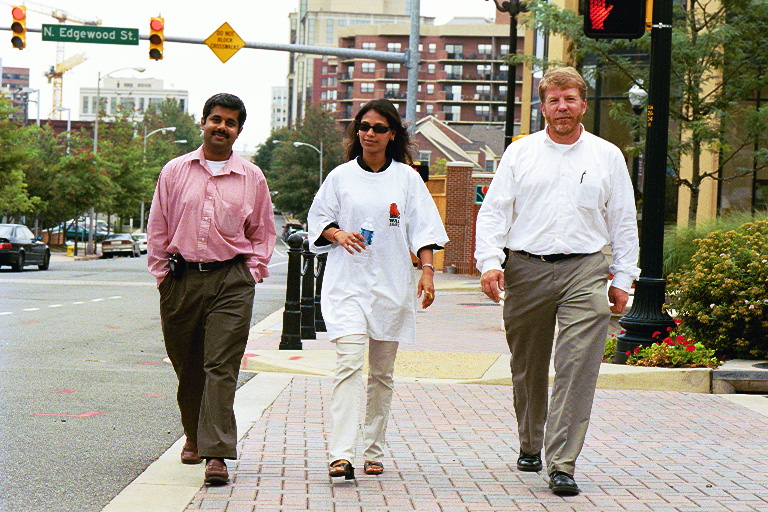 Suburban life has always been synonymous with long hours in the car — going to work, school, the grocery store, the mall, soccer practice and friends’ homes. Some people even drive to take a walk.

That’s changing now, just like the stereotype of suburbs as places where everyone’s white, married with children and plays golf at the country club. From Bethesda, Maryland, to Edina, Minnesota, to Kirkland, Washington, citizens are reinventing their towns to better accommodate walkers. Traffic is being tamed on busy streets. New sidewalks and trails are being constructed. Business districts are coming to life thanks to growing foot traffic.

Leading the charge are suburban leaders who see their communities’ continuing prosperity and quality-of-life dependent on creating lively walkable places that attract young people, families and businesses wanting to locate where the action is. Walking is gaining popularity across the U.S. for both transportation and recreation because it improves health, fosters community and saves money.

The best place to experience the future of suburban living is Arlington County, Virginia, right across the Potomoc River from Washington, DC. Built up during the 1950s, ‘40s and late ‘30s, after autos already dominated American life, it’s a classic suburb full of freestanding homes with driveways and green lawns. Nonetheless it’s been named one of the 14 best “Walk Friendly” communities in America by the Pedestrian and Bicycle Information Center at the University of North Carolina and one of the 25 Best Cities for Walking by Prevention magazine.

A Day in the Life of America’s Most Walkable Suburb

The next morning is windy with snow flurries, but the wide sidewalks of Arlington’s Virginia Square/Ballston district hums with people running errands at the bank, the cleaners, the mall, the tailor, the print shop, the pharmacy, the hair salon and the phone store. A lot of shoppers popped over from nearby apartment buildings and townhomes that have grown up recently what once was a struggling commercial strip, while others strolled from nearby single family homes.

Clarendon/Courthouse and Ballston/Virginia Square are both served by a regional train system, a boost for walkable communities that most American suburbs won’t have access to anytime soon. But pedestrians flourish in Arlington neighborhoods distant from train lines, too.

The Westover neighborhood sports a typical Mid-Century design with parking lots in front of many businesses but still offers friendly streetlife. A trio of middle schoolers walk home from the grocery with lunch fixings, while neighbors stop for a chat on their way to the hardware store, library, pharmacy, barbershop, bus stop, the Lost Dog Café or the Stray Cat Café.

Meanwhile the brand new Shirlington community, rising out of the ashes of a failed shopping center, feels like a suburban village. A Main Street built in what was a parking lot invites you to take an afternoon stroll browsing a wide selection of shops, ethnic restaurants, a library, a full-service grocery and Bus Boys & Poets, a popular bookstore. A few steps away are movie theaters, service businesses like hair salons and yoga studios, office buildings, townhomes, apartments, a bus station and parking garages.

These neighborhoods stretch over six miles in the heart of Arlington (which is both a city and a county at the same time), but you can reach them all on foot via pedestrian-friendly city streets or Arlington’s 50-mile trail network. 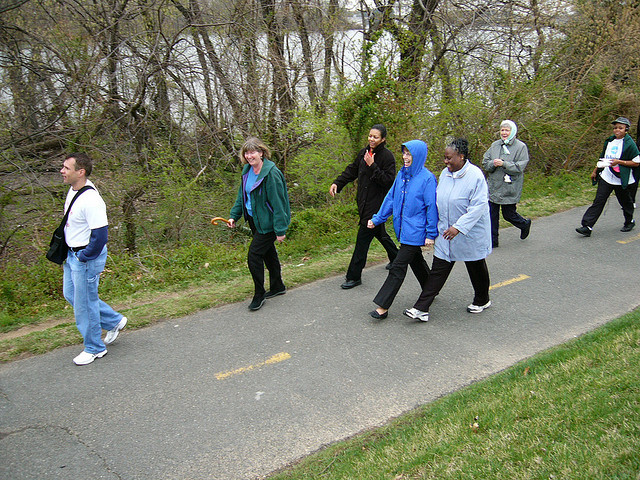 Arlington did not become a pedestrian success story overnight. The sidewalks are lively today thanks to a series of smart decisions carried out over several decades. The story of this community’s rise to become America’s most walkable suburb offers lessons for towns everywhere wanting to thrive in the years to come.

As an early model for the auto-oriented development that popped up all over the country after World War II, Arlington also become one of the first suburbs to experience the inevitable side effects of aging. The county population dropped from 174,000 in 1970 to 152,500 in 1980 as new land to develop became scarce and kids who grew up there moved away.

“In the 1970s, this was a declining inner ring suburb,” notes Chris Zimmerman, who served on the county board for 18 years. “I moved here in 1979 because of the cheap rent. Arlington was a stopover for a lot of people until they could afford to move somewhere else” — a familiar scene today in thousands of suburban communities.

The first step in Arlington’s revival was improved transit service, including a number of stops on the Washington Metro subway system. But most of the streets were still designed to move cars as quickly as possible with little regard for the impact on pedestrians and surrounding neighborhoods. “When I took office in 1996, traffic was the biggest issue in every neighborhood. People were worried about their kids walking to school,” notes Zimmerman, who left the county board in 2013 to become vice president of economic development for Smart Growth America.

The county board, spurred on by neighborhood leaders, adopted an “urban village” approach to planning, which Zimmerman says, “really resonated with people — the idea of comfort and community while still being cosmopolitan. Being both suburban and urban at the same time.”

One strong focus of this plan was to make walking more safe and convenient. A task force on traffic calming was launched and the outdated policy of charging homeowners for the cost of building new sidewalks — still common throughout the U.S. — was eliminated.

Ninety percent of all residential streets now have sidewalks (up from 73 percent in 1997), and traffic on seven of the county’s nine busiest roads has declined between 5 and 23 percent since 1996. As a result, walking and biking now account for 16.6 percent of all trips around town.

The county’s population has now climbed to 220,000, and it’s attracting many young professionals and families who could afford to live in wealthier suburbs but prefer Arlington’s walkability and sense of community.

“This could be done anywhere,” Zimmerman counsels. “It doesn’t depend on big-scale transit, it depends on good urban design.”

Walking As a Way of Life

Peter Owen, a lawyer who grew up in nearby McLean, Virginia, chose to live in Arlington after studying at University of Virginia, William & Mary and Harvard because he wanted to be close to his family but still enjoy opportunities to walk.

Still old habits die hard, he admits. “It took me about four months of living here to stop driving in my car to the grocery store, even though I lived just a few blocks away.” Owen still owns a car, but says it stays in the garage most of the time.

When asked why walking is so important to him, Owen has plenty to say: “I value the serendipitous encounters with my neighbors and the sense of connection to this place. You notice lots more things, like kids playing, when you’re living at five miles per hour.”

“It’s dramatically different walking here than in the 1990s,” says Dennis Leach, Arlington’s director of transportation, who lived here for years before joining the county staff. “You see all these people in places that used to be nowhere. It shows that if you do the infrastructure and land use right, you can provide people more viable transportation options and good places to walk, which has benefits for social equity, health and a sense of community.” 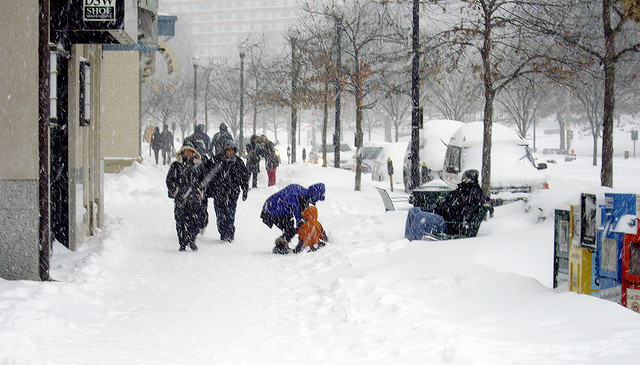 Of course, it takes more than crosswalks and sidewalks to get people walking. That’s why nearly everyone I spoke with Arlington pointed to the work of WalkArlington, a county-sponsored initiative to encourage people to get back on their feet.

WalkArlington developed 25 walking routes known as Walkabouts around the county, highlighting neighborhoods’ history, community resources and attractions. The WalkArlington Works program helps employers and staff to boost walking in the workplace, both for commuting and breaks during the workday. The organization is part the county’s Car-Free Diet program, an innovative approach that helps families figure how living without a car or car lite (using just one private car) would work for them. WalkArlington also excites kids about getting around on foot with programs such as Walk to School Day and walking school buses (in which parents become bus drivers on foot, picking up kids at their doors and walking them to school).

Arlington is taking steps toward fulfilling the dream of many residents, best articulated by the county’s former Bicycle and Pedestrian Coordinator Charlie Denney who grew up here: “Our goal would be to build a community where every 8-year-old can go all by themselves to buy an ice cream cone.”

Walking is gaining ground in many post-World War II suburban communities, including:

Edina, Minnesota: In 1956, this town just outside Minneapolis inaugurated the modern suburban era by opening the first enclosed shopping mall surrounded by vast acres of parking. Now Edina is working hard to evolve into a 21st century suburb, where there’s a place for walking and biking too.

And it’s worth keeping an eye on Tigard, Oregon, a Portland suburb, whose city council passed a resolution last November to make the community “the most walkable city in the Pacific Northwest."

Jay Walljasper writes, speaks and consults about how to create more healthy, happy, enjoyable communities. He is the author of the Great Neighborhood Book. His website: www.JayWalljasper.com