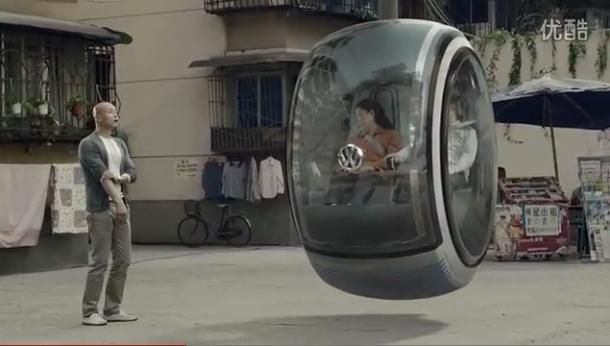 Concept cars represent the auto industry's best attempt to peer into the future. They feature cutting-edge technologies and stunning shapes, but they're usually years, if not decades away from reality.

Still, it may be the process used to imagine these cars, rather than their actual design, that provides the best clues about the future of the transportation industry.

Last year, Volkswagen launched something called "The People's Car Project" for members of its Chinese market. The idea was to crowdsource ideas for future car innovation via a virtual suggestion box on the project's website, and then turn them into reality through a series of online videos.

People in China loved the idea. Nearly 12 months later, the project has inspired 33 million website visitors and the submission of 119,000 unique ideas for possible automotive products and technologies. Volkswagen developed concept cars around its three favorite ideas and is displayed them at the Beijing Motor Show. Not surprisingly, a flying car was near the top of the list:

The other top entries were the Music Car, which changes its color based on the driver’s music choices, and the Smart Key, a smart phone that can also start a car and monitor important functions.

Aside from fulfilling all of our Back to the Future fantasies, these cars, and the project that spawned them, can teach us a powerful lesson about the future of virtually every industry on the planet.

No longer will a companiy be content (or able) to simply forcefeed the public what it deems the next best thing. In fact, the roles may reverse completely, with manufacturers depending on market feedback before deciding what it will make or how it will market it. Companies will be forced to design smarter products, because the people that request them are searching for smarter solutions.

"The ‘People's Car Project' in China marks the beginning of a new era in automobile design," Luca de Meo, Director of Marketing, Volkswagen Group said. "We are no longer just building cars for, but also with customers and at the same time initiating a national dialog which gives us a deep insight into the design preferences, needs and requirements of Chinese customers."

Although we've seen crowdsourcing applied to creative and philanthropic efforts in a variety of different ways, Volkswagen's strategy seems to imply that soon these "altruistic" tactics could be put to use in the for-profit world as well. Instead of simply crowdsourcing ideas for neighborhood improvement or funds for a social justice campaign, we may soon see corporations looking to the crowd for ideas about prefered product development, including material sourcing, packaging design, or delivery options.

In this way, consumers will be able to go far beyond voting with their dollars by sharing concerns about sustainability efforts, pollution, waste, cost, and product features directly with the manufacturers. By looking to their audience for guidance before production rather than after, companies can become more efficient, not wasting time on products that the public doesn't want or need, as well as more transparent, and able to react quickly to consumer questions and requests.

What product or service would you suggest if your favorite brand was looking for suggestions? Share your ideas in a comment!