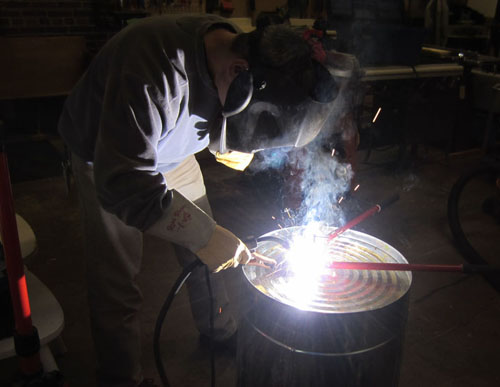 With almost 1000 members and growing, the West Seattle Tool Library has become one of the most successful community-led tool lending services in the country. In less than three years, the project has grown into a community hub where people not only share tools, but knowledge, support, and a thirst for neighborhood improvements and sustainability collaborations. In this interview, Shareable community member Sven Eberlein chats with WSTL manager Micah Summers about what it takes to run a tool library and some of the unexpected places it can go.

Sven Eberlein: Tell me about the West Seattle Tool Library. How did it come about?
Micah Summers: It started with a group of folks from non-profit Sustainable West Seattle talking about how cool it would be to have a tool library and then applying for a grant from the City's Department of Neighborhoods. When the grant was awarded I stepped in as a volunteer coordinator, which helped us stay funded for the first year, and it took off from there.

SE: Were the guys who wanted to make this happen a bunch of handy people with lots of tools?
MS: I'm definitely that type of person. I randomly stumbled across the group, saying they wanted to open a tool library and were looking for volunteers. So I checked out what they were up to and decided I wanted to be part of it. A couple of guys were pretty handy with tools, but there were also some novices. 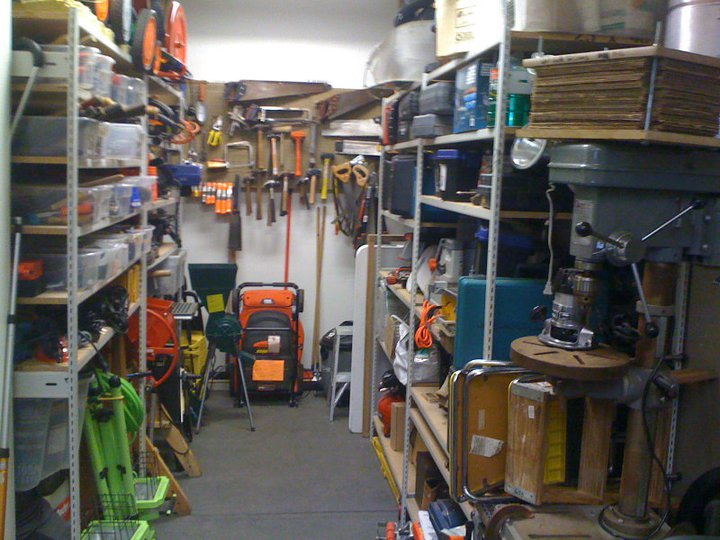 SE: How does it work?
MS: All you do is fill out some paperwork and get signed into our system, at which point you can check out any tool, generally for a week. We have recommended donations either for the tool you're borrowing or through an annual membership, but technically it's free to use, you pay what you can.

SE: What's the ratio between professionals and first timers using the tool library?
MS: I'd say at least half of our users are relative novices. About another 30 to 40 percent are somewhat skilled or have limited experience. Probably only about 5 to 10 percent using our services are professionals, usually because they already have tools and generally need immediate access that we can't reliably provide right now. Our current hours and availability cater towards average homeowners with weekday jobs.

SE: Do you feel that it has encouraged people who otherwise wouldn't be doing handy work to get engaged in making things?
MS: Yes, it certainly has, and in several different ways. For example, for people who don't have the tools and are short on funds it can often make the difference of whether they can do the project if they can spend more money on the materials and check out the tools from us. But there are also the folks who come in regardless of their ability to pay; they want to start a project but don't know how, so we try to provide that support.

SE: So this enables people to be a little more experimental with their projects?
MS: Yes, the library is definitely the kind of place where people can come to learn. A lot of folks know what they want to do, but they might not necessarily know what tools are best for that job. So they're able to talk to people with experience, which is a big value we provide. Also, if you're thinking about buying a tool but want to play around with it before committing, the library is a good way to test out tools.

SE: What would happen to the tools if they weren't used in the library? Can they be recycled or dropped off at Goodwill?
MS: For starters, most of our inventory is accumulated through donations, and we haven't had to do much marketing for those donations either. So it's pretty clear that there are a lot of tools either being discarded or collecting dust in people's basements. There aren't many alternative options other than us. You can take tools to Goodwill but it's not really their specialty and they don't really have a department for tools.

SE: You do a lot of community projects like park restorations, greenhouses, and home energy improvements, right?
MS: Yes, we're going in a lot of different directions and experimenting with a lot of different forms of outreach and community involvement. We have a monthly meeting called "Ask the Experts" where we invite local professionals and contractors to come in to chat with each other. It's a less intimidating format that allows the public to field questions and get information on projects people are working on, and sometimes it turns into leads for contractors.

We also started a "Fixers Collective" where we invite the public to bring in broken items and form groups to help people figure out what's wrong with them and fix them as much as they can. We've fixed everything from kitchen appliances to electronics and laptops.

Then there are the external community projects where we help build community orchards or playgrounds. There are also various restoration projects like finishing alleyways and group work parties where we provide a lot of the tools. 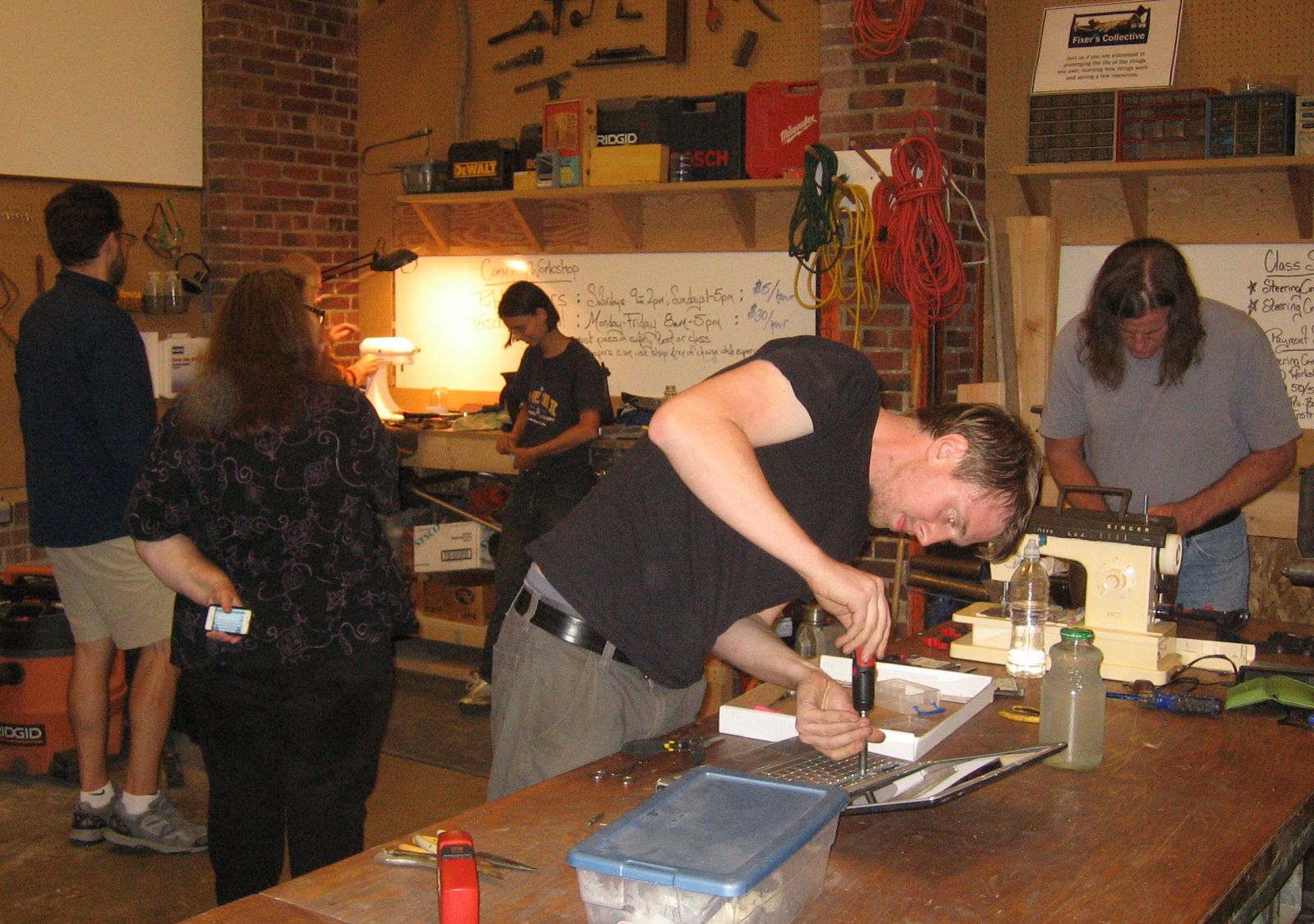 SE: You're also offering classes, right?
MS: We've been doing that on and off, but when we've been doing it, it's been quite successful. The classes range from general tool and power tool usage to Women's DIY and plumbing, tiling, and electrical, as well as other crafts like beer making or beekeeping. We also have a workshop with full-sized portable tools that functions as a classroom space with table saws and big routers.

SE: Can you tell me a little bit about the mobile library you've been working on?
MS: Through a couple of grants we've developed a mobile unit which we're continually evolving. It can serve a lot of purposes, but its overall goal is to spread awareness about the library. It can also go out to work parties, deliver tools, or have a mobile work station where people can get work done. It's kind of a prototype for being able to manage multiple inventories between locations and to integrate it with our software and work flow.

The ultimate mission is to have a lot of community tool libraries that can work together similar to the public library systems. For example, folks in Northern Seattle are following our lead and they're opening another tool library in the city. We're trying to help them with their software and inventory, so at some point it'll be a lot smoother to have inter-library loans and things like that.

SE: What are some of the biggest challenges in getting these mobile workshops going?
MS: It's been a lot of physical work in getting our trailer upgraded and equipped to have it easily available and deployable. Then there's outreach to the community, so that people know this resource exists. We've made a critical difference in some community projects, and whether we could make it happen or not depended on our tools. One of our big challenges has been how to grow sustainably and be able to serve the demand of the community without knowing exactly how much that is.

SE: Where else in the country is this happening? Are you connected with other tool libraries?
MS: Yes, there is definitely a growing movement of tool libraries. One of our members made up a Google Map of all the tool libraries. When we started out, the web developer on our team who wrote the custom software for all of our inventory and user management systems also built our own tools to track what was really appropriate for lending tools in the market place. This system is now being used in tool libraries all over the country. We also launched Sharestarter.org which helps you develop a toolkit on how to start your own tool library, with tons of information on what you need. We've been getting tons of interest from all around the country and the world from people who want to start something like this.

SE: So you guys are the most evolved of all the tool libraries?
MS: I'm not sure if I'd go that far. Maybe in some aspects, but there's quite a few projects like the Tool Lending Library in Oakland that have been around for quite some time. They're part of the public library and have a lot more funding to work with and mature more quickly. There are some other big ones, but each one seems to be taking a different approach.