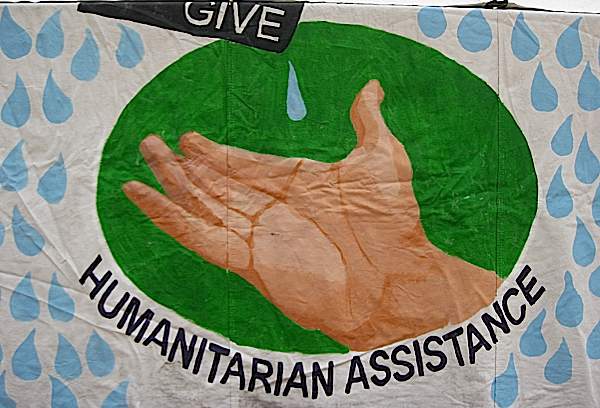 Boing Boing posted a thought-provoking interview with Asit Biswas, president of the Third World Centre for Water Management and winner of the 2006 Stockholm Water Prize. Biswas argues that there is no water shortage, as so many people say. There's plenty of water to go around; instead the problem, in a nutshell, is that the infrastructure that gathers, treats, and delivers water to people isn't shareable. Highlights:

I want to make sure I understand your position correctly. You say there's not a shortage–or coming shortage–of water. That the real problem is infrastructure. Is that correct?

Asit Biswas: Absolutely correct. Neither in developed or developing countries is there a physical scarcity of water. The problem is lack of infrastructure, and more importantly, the lack of management. And those are things that are bad in both the developing and developed world. For instance, in Delhi, India, everyone was telling the Prime Minister that they had a water scarcity problem, but I was able to give him a new perspective that he wasn't hearing from his advisers or from the U.N.

The real problem is the following: The average stay of a water utility manager is 30 months. And he's neither a water nor management expert. The only qualifications of these managers are how close they are to the mayor. If you put this type of person in the position to manage water, they look at it and see a horrendous problem and they just hope and pray that during their stay nothing will happen and the next fellow who comes along will hold the ball. That's got nothing to do with water. And yet the water profession goes around and says we're running short of water. And it's a bunch of rubbish.

But is there really a functional difference between a crisis of scarcity and a crisis of management? Either way, the people don't get water.

AB: There is a fallacy the world doesn't understand. Everyone in the world has access to water. Everyone. If you didn't, you'd be dead by now. The issue is whether the water is clean, drinkable, and how convenient is it to get that water. So even in the slums of the worst cities people have access, but it's not clean, they pay through the nose and supply is very erratic. The point I'm trying to make is that everyone has access. The question is can we give them better service, and much lower cost and much higher convenience. My view is that all three are possible.

Can management really make that big of a difference?

AB: Let us take the case of water supply for the city of Phnom Penh in Cambodia. In 1993, the Phnom Penh Water Supply Authority was flat broke. It needed heavy governmental subsidies to run a very inefficient operation. The institution was badly managed, corrupt to the core, lost 72% of its water due to unaccounted for losses, and even the rich and the powerful people, let alone the poor, did not have access to drinkable water. By improving its governance practices, it started to supply drinkable water on a 24-hour uninterrupted basis. This public sector company made a profit from its operation from 1997, which has progressively increased year after year since that time. The poor have access to water. In fact, their water bills have been reduced by 70 to 80% compared to what they used to pay to the water vendors earlier. In addition, the poor receive clean, drinkable water through house connections. The unaccounted for water now in Phnom Penh is 6.19%, which is less than 1/4th that of London, and very significantly less than Paris, New York or Los Angeles.

You used to think there was a water crisis, what led you to change your mind?

AB: I heard it so many times from the World Bank and the U.N. that there is a water crisis. Like the rest of the world, I assumed these guys knew what they were doing. But then I started looking at the global figures they put out and what assumptions they'd made. The assumption is that a city is in a crisis of scarcity if it doesn't have 1500 cubic meters of fresh water per person, per year. What they forget is elementary knowledge that water isn't like oil. Nobody really consumes it fully. Of 100% of the water that comes to your house, 99% goes back as waste water.

The fundamental question becomes how do we manage our waste water so that it can be used and reused again and again. Singapore does this. That city has 300-350 cubic meters per person, per year, and they don't have a water problem. This is an issue of efficiency. I found that the total water use in 2005 in the United States is actually less than what it was in 1975 with much less population, economic activity and food requirement. And the US is just scratching the surface on efficiency.

(For a completely different view of how to organize water sharing, see "Sietch Nevada.")