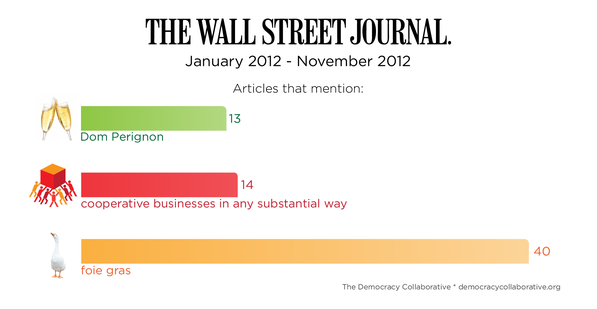 The Wall Street Journal has the widest circulation of any paper in the United States, particularly famous for its coverage of business. And while it may not be surprising, new research by Gar Alperovitz and Keane Bhatt shows the dissapointing fact that the paper barely pays attention to workers cooperatives.

In an article entitled “Revealed: Wall Street Journal More Interested in Caviar and Foie Gras Than Employee-owned Firms”, Alperovitz and Bhatt demonstrate the ways that the Wall Street Journal systematically covers the concerns of the rich while ignoring the flourishing solidarity economy.

The UN designated 2012 the international year of the cooperative, and, as Alperovitz and Bhatt write, “more than 120 million Americans are members of co-operatives and cooperative credit unions”. But throughout 2012, the Wall Street has given “more than passing mention” to cooperatives in only 14 articles!

While references to foie gras and golf proliferate, the real changes that are transforming the American economy are being ignored. And if the Wall Street Journal is ignoring these issues, it is easy to imagine that most mainstream papers and news sources are doing the same. 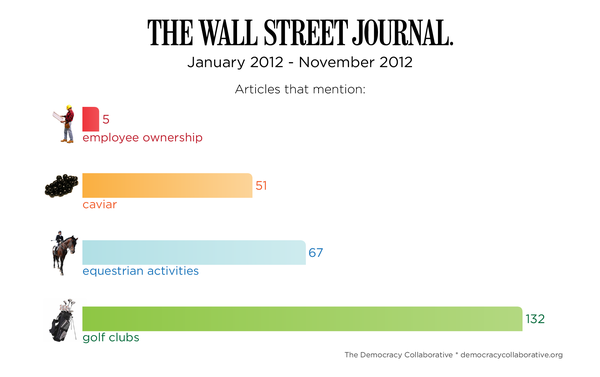 Why are these major shifts in American working life sidelined? Perhaps it is because the Wall Street Journal sees itself as a tool for the elite, and speaks to an audience of the wealthy. But there may be another reason: these forms of solidarity and cooperation threaten the stranglehold on political and economic power enjoyed by corporate hegemony in the United States. It certainly isn’t because co-ops are a tiny part of the economy: “Co-ops in the U.S. generate over $500 billion in annual revenues. The global market for smartphones is estimated by Bloomberg Industries at $219 billion — less than half as large.”

The willful blindness of media giants, however, can’t stop the rising power of the cooperative movement. And alternative media sources can provide the coverage that they refuse to do. Part of our mission at Shareable is to show the real ways that the economy is changing and shifting, the bottom-up initiatives for worker’s control that are transforming our lives and our futures. If you can, please participate in the crowdfunding that makes Shareable possible.

And next time you reach for your business news, consider turning somewhere other than the Wall Street Journal.