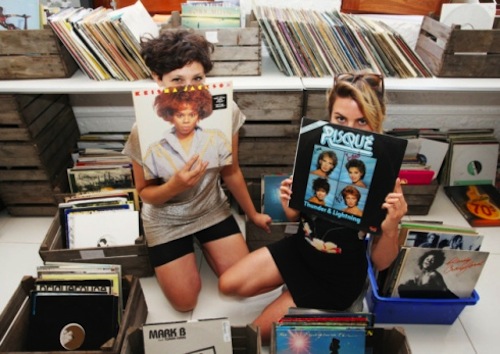 Vinyl records are back. According to the International Federation of the Phonographic Industry (what a mouthful!), 2012 saw the highest vinyl sales in 16 years. I've seen this trend with my own eyes. The vinyl bins in the Bay Area record store where I work, which used to be frequented by older collectors, crate diggers and hipsters, are now frequented by…everyone. It's not unusual to see a 13 year old flipping through the wax, a herd of UC students comparing album art, or a 30-something executive with several records under his arm.

Considered by purists to be a warmer, superior medium, records offer listeners a way to connect more directly with the music. And vinyl, with its sizable packaging, flip-it-over format and visible grooves, is a hands-on, tactile experience that lends itself particularly well to group listens.

Recently, a shop in north London was transformed into a vinyl-only lending library called, quite aptly, The Vinyl Lending Library. The brainchild of Elly Rendall and Sophie Austin, the library was created to give people access to a wide variety of musical styles, allow them to borrow and share records, and to help build community around music. Rendell and Austin also plan to use the space for DJ lessons, documentary screenings and more.

Stocked entirely with records donated by the public, the library is free to those who donate records. A small fee is charged for those who simply want to borrow music. Members can take up to five records at a time.

While some of the details, such as what to do if someone doesn't return the records they borrow, will be worked out as things progress, the library is now open and borrowing has begun. The plan is to develop trusting relationships between the library and its members and build a DIY, reputation-based community where benefits can be earned as members demonstrate their trustworthiness.

If all goes well, the lending library could serve as a model for people who want to share the love of vinyl without the expense and space issue of having a personal collection.