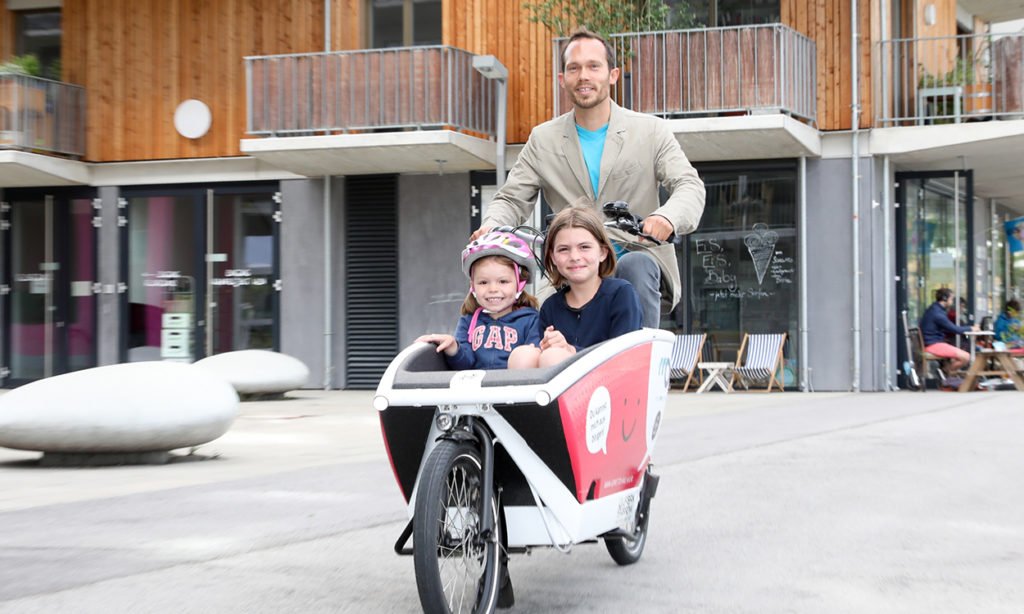 While bike shares are growing in prevalence in almost all major metropolitan cities, the unique benefits of cargo bike shares are being utilized and even subsidized in more European cities.

In 2017, the city of Vienna created a funding program focused on subsidizing private and business cargo bikes. One part of this subsidy was used to introduce a cargo bike rental program for various neighborhoods, organized and managed by local stores and the communities themselves.

The Vienna Mobility Agency, a municipal department of the city, was given the task of searching for appropriate locations and operators and subsequently installing the system.

In July 2017, the “Grätzlrad Wien” (which translates roughly to “cargo bike Vienna”) program, an online platform, started its services, with full support from the city administration. Cargo bikes are now available in 13 neighborhoods and have had more than 2,000 bookings as a climate-friendly and free alternative for people running daily errands.

According to the Vienna Mobility Agency, users have ranged from DJs cycling to their concerts, film teams renting bikes for their movies, and parents trying cargo bikes for the first time. They are a wonderful mode of transportation for carrying small children, groceries, small furniture, and even pets.

Renters choose and book the bikes online, and with a 50 Euros refundable deposit, they can rent them for up to 24 hours, with some operators offering them for the whole weekend.

Kathrin Ivancsits, director of media relations and campaigns for the Vienna Mobility Agency, says the agency works as an intermediary between citizens, the administration, and politicians to make walking and cycling in the city easier and safer.

In 2017, the agency brought the European Cycle Logistics Conference to Vienna and developed public cargo bike funding for the city.

One of the Grätzlrad service points is hosted by MO.Point, an Austrian company that plans, implements, and operates shared mobility solutions on behalf of municipalities and real estate developers. MO.Point sponsors one of the bike stations, the “Grätzlrad Nordbahnhof,” in Vienna’s 2nd district. They also operate several “mobility points” around the city, where consumers can rent vehicles such as e-cars, e-kickboards, e-bikes or e-cargobikes.

Stefan Arbeithuber, Managing Partner at MO.Point Mobilitätsservices, says one of the challenges is that a condition for the subsidized program was that hosts offer the cargo-bikes for free. Due to the frequent usage, the costs for maintenance were higher than calculated and even exceeded the initial purchase price of the cargo-bike itself.

“Nonetheless, we do see the program as very positive, because it created awareness,” Arbeithuber says. “As a private mobility operator, we believe that subsidies are very attractive to implement and steer these new mobility offers. But to be feasible in the long run, the business models must work without subsidies.”

“Cargo Bikes are widely seen in the city of Vienna because the need for sustainable logistics and transportation is being taken more seriously by people living in the city, the media and politicians,” Ivancsits says.

Ivancsits says cargo bike subsidies are actually quite common in Europe, and have been implemented in Basel, Switzerland; Salzburg, Austria; Bologna, Italy; and München, Germany.

Expansion plans for the Grätzlrad program depend on both continued funding and the willingness of operators. Currently the program is being evaluated and analyzed by a study with the Vienna University of Technology, taking in feedback by both the operators and the users.

“We aim to learn specifically [how] people use Grätzlrad and whether it helps to forgo car-use,” Ivancsits says. “We are also evaluating the operators experience, as they voluntarily rent out the cargo bikes in addition to their core business, which is generally running a shop or a restaurant.”

The results will provide indications about the future development of the project, which currently covers a wide watch of central Vienna.