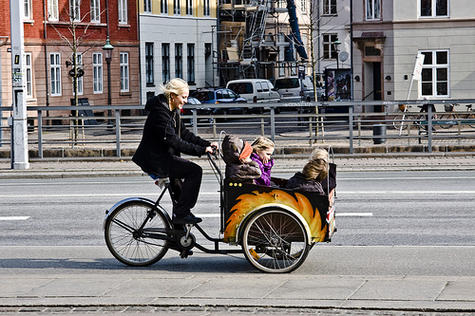 Cargo bikes, which can be thought of as smaller and versatile counterparts of the pedicab, are bicycles designed to carry everything from bags of groceries to pots of plants. These utilitarian bikes have been in vogue in Denmark for years, and in its capital city Copenhagen, this nature-friendly mode of transportation is rapidly replacing cars. 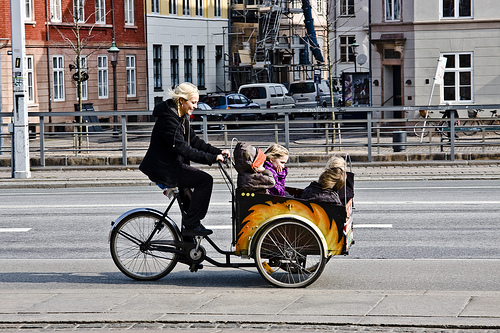 As the video below on Copenhagen's cargo bike culture reveals, cargo bikes are especially alluring to parents seeking to shuttle their children around the city with ease. Some of the city's small business entrepreneurs are also innovating designs and adding features to transform their cargo bikes into portable businesses to sell newspapers, crepes, drinks and more.

Across Denmark's borders, in Germany, a new website called Velogistics is offering an intuitive platform to enable peer-to-peer sharing of cargo bikes internationally. The website is maintained by Tom Hansing. Since the launch of the Velogistics website, people from the United Kingdom, Austria and the United States have offered to rent out their cargo bikes.

The premise of this cargo bike-sharing project is simple: people interested in lending their cargo bikes post photos and short descriptions of the features of their bikes to the Velogistics website. The lenders can offer their bikes for free or set rates for daily use, and those looking to rent a cargo bike can send messages to the lenders directly via a form on the site. The location of all the cargo bikes that are available for rent are plotted on a world map on Velogistics' homepage for users to quickly ascertain where the bikes are available for rent. 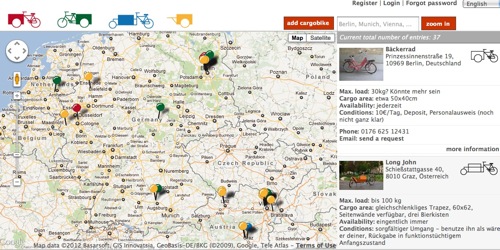 Hansing, who calls sharing "the new property," said in an email that he hopes the website will spread to many parts around the world and will be translated in many languages. He added that providing an online space for people to share their cargo bikes and offering them an incentive to earn a little money will hopefully lead to an increase in the use of cargo bikes.

"The most important thing: Muscle power rather than fossil fuel. We need to save our natural resources and use it for really important things…not cars," he said, adding that he would like to include additional features to the website like profile pages for lenders and a mobile application if he is able get funding for the site through donations.

Christophe Vaillant, who is also involved with Velogistics, organizes workshops to build cargo bikes out of old used bikes that are often left in backyards or basements of buildings in Berlin. He said he organizes teams of three people who are skilled in building bikes to modify these old bikes, so they can be used as cargo bikes. He posts information about the repurposed bikes on the Velogistics site so they can be shared locally. 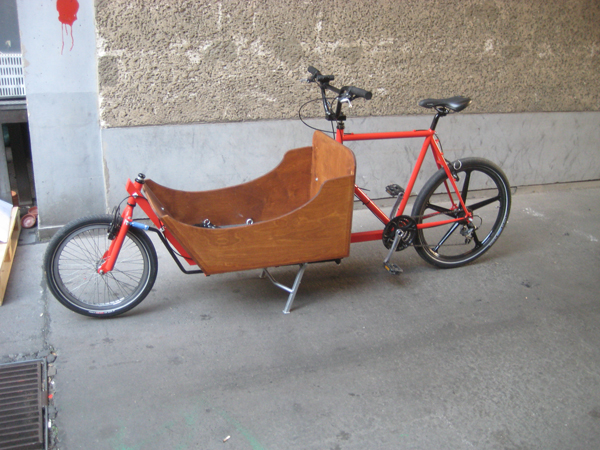 Vaillant said that he is also developing an open-source wiki with do-it-yourself instructions on building cargo bikes.

"The idea is that globally the knowledge commons of making cargo bikes will grow and be refined step by step, and that locally groups can rebuild and copy successfully implemented workshop formats," he said in an email.

Though San Francisco has a thriving biking community, the popularity of cargo bikes has yet to migrate over to this side of the pond.

Josh Boisclair, a mechanic at My Dutch Bike in San Francisco, a company specializing in the import and sales of city and cargo bicycles, is one of the few cargo bike enthusiasts in the city.

"It's getting more popular, but it’s still in its infancy," said Boisclair, adding that the city’s parking woes is one of the reasons people are turning to bikes. He said My Dutch Bike is working to popularize cargo bikes. "I promote the bike by just riding it around. We promote our business just by living by example – riding the bikes that we sell," he said.