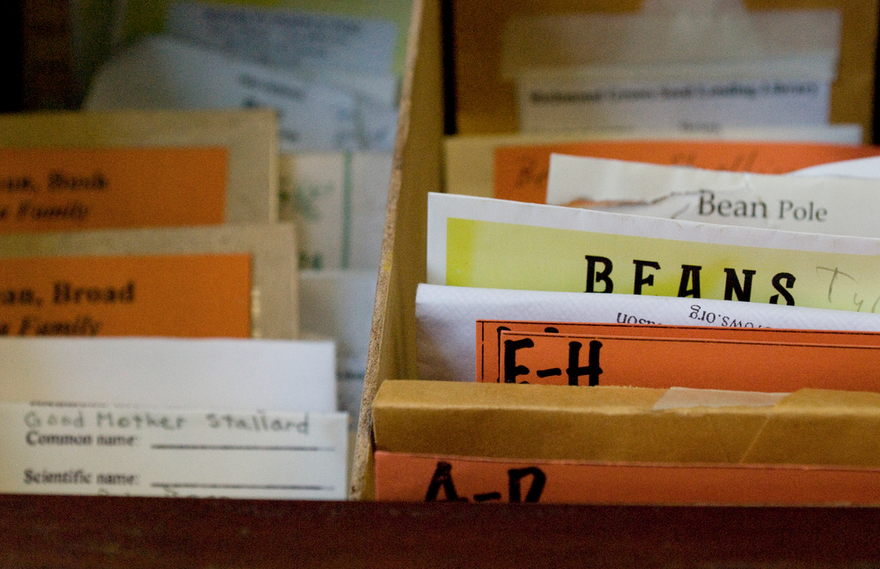 In June, officials from the Pennsylvania Department of Agriculture alerted the Joseph T. Simpson Public Library in Mechanicsburg that their seed library was in violation of the Pennsylvania Seed Act of 2004. According to officials, the library would have to follow the prohibitively expensive procedures of large-scale commercial seed companies or only offer commercial seed. The first option is impractical and the second option would gut the exchange of its primary purpose to serve home gardeners who want to save and exchange their own seed.

The Sustainable Economies Law Center (SELC) reported in a recent article on Shareable.net that the Pennsylvania law may only apply to commercial seed operations. Despite what may be an incorrect interpretation of the law, other states are now considering adopting Pennsylvania's seed library protocol. This could kill a fast growing U.S. seed library movement.

The upside to the crackdown is that in the weeks since, seed librarians from across the country have come together. As David King, founder of the Seed Library of Los Angeles (SLOLA) puts it, “The phone lines and emails lines were burning up as the seed library community turned from shock and disbelief to mobilizing to protect their efforts.”

The goal now is to direct that energy toward protecting seed libraries, which are a cornerstone in efforts to foster the genetic diversity of food and strengthen food security.

Thapar points out that this movement already has traction in some communities, especially as it relates to the anti-GMO movement, but that the situation in Pennsylvania has raised the profile of the importance of genetic diversity in food. One goal for Shareable and SELC is to harness this energy by activating all the people who want to do something about it and need an avenue to do it. Working with Richmond Grows Seed Lending Library and the seed library community at large, they are planning an advocacy campaign to protect seed libraries. 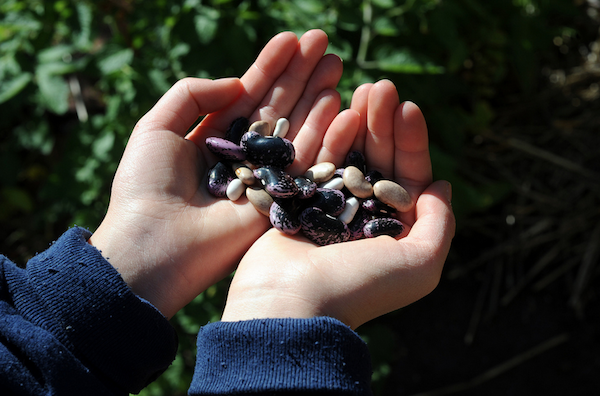 Educating the public and seed officials about the importance of seed libraries is key to the movement. Photo by furtwangle (CC-BY-2.0)

While much of the seed library activism is still in the planning stages, there is a wave of support from people including seed library organizers and patrons, biodiversity proponents, anti-GMO activists, community farmers and concerned citizens. The challenge, at this point, is finding methods of informing people about the issues and developing ways for people to voice support of seed libraries. A key piece of the strategy is educating both the public and agricultural officials by making them aware of what seed libraries are, how they operate, and the fact that they are not a threat to agriculture or seed quality on a large scale.

“There’s a misunderstanding around what happens at the agricultural scale and what happens at the garden scale,” says Rebecca Newburn, founder and co-coordinator of the Richmond Grows Seed Lending Library, which was among the first seed libraries in the U.S. “It’s incredibly important to farmers that the seed is what it says it is and that it’s of good quality,” she continues. “On that scale, the seed laws are very important and they protect the farmer and the community. On the small scale—neighbors who’ve been sharing seeds for 12,000 years—the laws aren’t appropriate.”

As it stands, states have different laws around seeds. There is something called the Recommended Uniform State Seed Law, created by the Association of American Seed Control Officials, which is a model law that states can use if they choose. A possible solution to the legal grey area around seed libraries is if this law, or a federal law, clarified that seed regulations don’t apply to seed libraries.

Such a law would also define boundaries of what a seed library does and how they operate. This would allow seed libraries to rest assured that their activity is legal.

The seed library community already has a protocol that they use among themselves. Newburn cautions that a national protocol would have to allow for locally-grown seeds, that there is going to be off-typing, and there will not be germination testing at that scale.

“If the national protocol understands that our food security and the health of our communities relies upon locally-grown food and varieties that work well in our climate, ” she says, “and they understand the value of locally-grown seeds, then I can see some value in a national protocol. But there has to be an understanding that this has been done for thousands of years without protocol.” 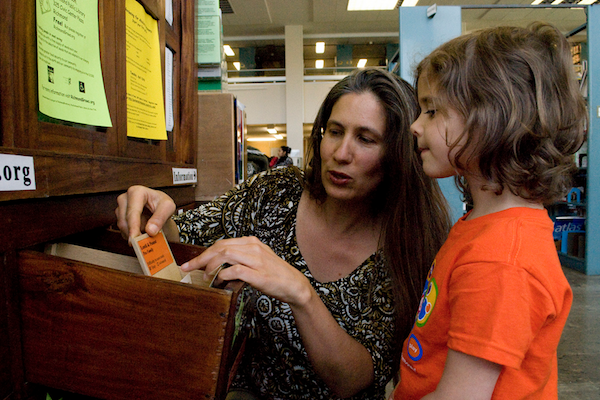 Rebecca Newburn of the Richmond Grows Seed Library familiarizes a youngster with the seeds.

According to Thapar, seed officials are not necessarily hostile to seed libraries. He says that once seed library activists can share information and understanding with officials, that they might, in fact, find allies that support the seed library mission. He notes, however, that it’s going to take national support.

There are numerous ways to support seed libraries. Here are seven actions you can take to join the movement:

2. Stay Informed: Much of the seed library activism is in the planning stages at this point so it’s important to stay up on the issues and current happenings. Good places to start are seedlibraries.net and Setting the Record Straight on the Legality of Seed Libraries. You can also join the SELC mailing list and the Shareable mailing list to receive updates about the seed libraries movement in your inbox.

3. Help Create the Seed Law Tool Shed: Seed laws and related information for each state are being collected in this Hackpad document created by SELC. An open resource, the Seed Law Tool Shed is being built by concerned citizens and seed library activists who want to learn more about seed laws and contribute to this valuable database. SELC invites people to contribute to the document.

4. Attend the National Seed Library Summit: An in-person forum for information sharing and solutions-thinking is the upcoming National Seed Library Summit. Taking place on Wednesday, September 10 from 4-6 p.m. at the National Heirloom Expo in Santa Rosa, Ca., the summit, now in its fourth year, is a gathering of seed library activists and supporters from around the country. It's is an opportunity for seed librarians to meet, share best practices, and learn about challenges and how other communities are problem solving. This year, the seed library crackdown is at the top of the agenda.

The summit is an unofficial part of the National Heirloom Expo and its location will be determined at the expo. It will then be posted on SeedLibraries.net and the SLOLA blog. You can also ask for the location at the SLOLA booth at the expo. King says that a statement from the Seed Library Summit regarding the current seed libraries situation can be expected following the event.

6. Get Involved with Legislative Campaigns: A petition to protect seed libraries from unnecessary regulation is in the works. When the opportunity to sign it, as well as get involved with legislative campaigns and possibly vote on seed library issues come around, do so, and encourage others to do so as well.

7. Educate Your Community: Start talking about the importance of seed libraries, biodiversity, locally-adapted varieties, food security and community-level exchanges now. The more people there are talking about these inter-connected issues, the better chance they have of finding allies and supporters, from the neighbor-level up to the regulatory level. 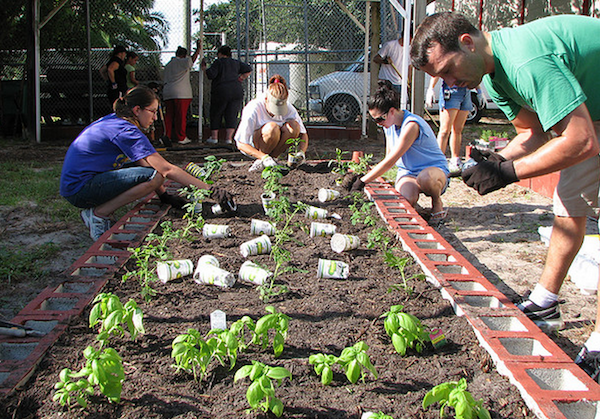 Seed libraries serve to remind us of the importance of community-grown food. Photo by Gabriel Kamener (CC-BY-2.0)

In 2010, there were just 12 seed libraries in the U.S. Now there are over 300. There’s an incredible opportunity here for seed libraries to lead the way in educating communities about the importance of locally-adapted varieties, food security, community-level sharing and more.

“What we’re hoping to do is capitalize on this attention that seed libraries are getting and grow the movement,” says Thapar. “It would be great to have a seed library in every city in the U.S.”

Newburn sees this as an opportunity to help the public and agriculture officials understand the value of seed saving on a local scale, and the importance of biodiversity. “I’m hoping that out of this comes a greater understanding of the concerns we have about biodiversity…and being able to provide food security for communities in a time of economic instability as well as climatic instability,” she says. “I’m really hoping that it will inspire people to learn more about seeds.”

She stresses that seeds are the basis of our food system and part of our cultural heritage. “Our food has always been a vital part of how we come together as a community,” she says, “and seeds are at the core of that. We’re hoping that through this, we’ll all be able to reunite and reconnect with that awareness that we’ve lost.”

Show your support for seed sharing. Sign the Save Seed Sharing petition.