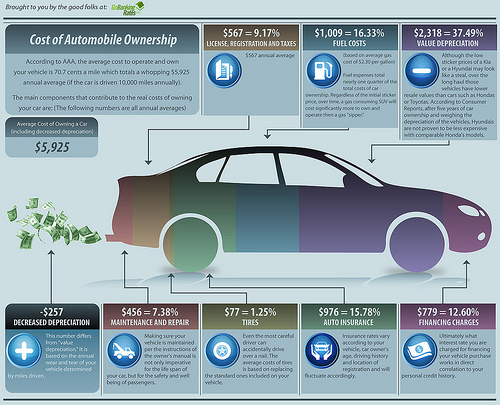 Shareable contributor Tammy Strobel pointed me to this graph, which breaks down the costs of individual car ownership. I realize, of course, that many people must own a car… but thinking about the costs certainly highlights the benefits of sharing cars with other people instead of owning one by yourself.

There are other costs to car ownership, of course, that are somewhat more difficult to measure, like obesity and global warming. However, a British nonprofit called Sustrans created this beautifully straightforward and understandable graph about the relationship between cycling and childhood obesity: 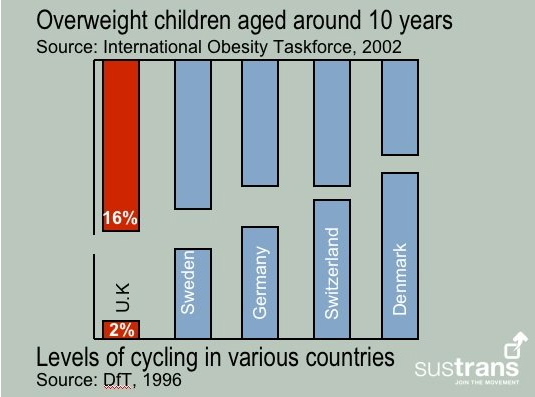 That's Europe. Curious about the United States? As I've written elsewhere: Thirty years ago, reports the Center for Disease Control and Prevention, 90 percent of children who lived within a mile of school walked there. Today, that number is 25 percent. In the same period, the number of overweight or obese children has roughly tripled—two trends that the CDC claims are intimately related.

Driving to school also contributes significantly to global warming. If the number of kids who walk and bike to school was restored to 1969 levels, our nation would cut 3.2 billion vehicle miles, 1.5 million tons of CO2, and 89,000 tons of other pollutants annually, argues Margo Pedroso in a 2008 report for the CDC, "Safe Routes to School." According to Pedroso, this is the equivalent of keeping more than 250,000 cars off the road for a year.

So next time you're about to drive…stop, and consider the alternatives.