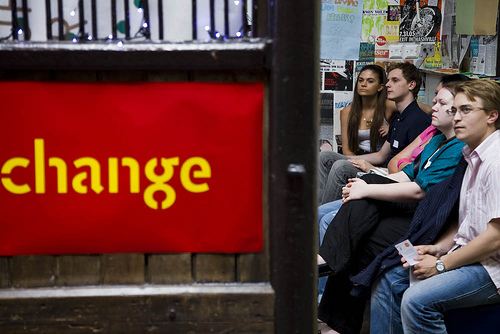 Life is getting better faster, as Jesse Richards suggests in today's Q&A with Rachel Botsman. Food is more widely available; we live longer; more people have money and violence, disease and child mortality are down all around the world. Yet there will be turmoil.

"The bottom-up world is to be the great theme of this century,” predicts Matt Ridley in his controversial new book Rational Optimist.

Doctors are having to get used to well-informed patients who have researched their own illnesses. Journalists are adjusting to readers and viewers who select and assemble their news on demand. Engineers are sharing problems to find solutions…. Politicians are increasingly corks tossed on the waves of public opinion. Dictators are learning that their citizens can organize riots by text message. `Here comes everybody‘ says author Clay Shirky.

In this bottom-up world individual specialization and free exchange of goods are vital to improving more lives according to Ridley. Human intelligence is becoming collective, not individual – thanks to these two inventions. We can generate more value and options with for each other.

As proof, he recaps the course of economic progress in this way. When humans invented specialization and trade, I could make something and you could make a different object, crafts we each excel at. Each of us trades our best products rather than making them all ourselves.

Then I can focus on making mine better and faster. As others do likewise we trade and sell better products and have more choices, thus spurring further innovation – both in making and trading goods.

Thus consumption could grow more diversified (making life better), while production grew more specialized. William Easterly counters Ridley’s premise: “Specialists often have the most to lose from new technologies that displace the old ones they know so well, and may want to block innovation.”

Yet it seems that the power of the marketplace in a networked world to hear about that innovation would eventually push aside such stonewalling specialists’ attempt to block access to the new, new thing.

Our opportunities multiply as human intelligence becomes “collective” and we generate more value with for each other.

Near the end of the book Ridley pulls together many threads of his argument for an optimistic future with these bold forecasts:

I’m surprised that Ridley ignored the role that language played in the evolution of human progress, especially as it is vital to specialization and trade.

Another area that Ridley does not explore–and that Financial Times columnist Samuel Brittan raises — is that the rise of the collective brain that Ridely cites may, in fact, be collective brains – people who band together around their common interests.

While the upside is the sense of belonging that engenders, the downside is, as Ridley has suggested is “generally speaking the more cooperative a species is within groups, the more hostility there is between groups.” If this future scenario does happen then we may have more and more kinds of tribes and more kinds of intense disagreements amongst them – and worse.

Also, while I, like Ridley, think “open” markets aid innovation I have this caveat. To be truly open there must be a level playing field for competition and a true accounting for all costs to the public in the price of that product – that means no hidden subsidies, protections or costs of clean-up, etc. by government. That base line role of government regulation will always be hotly contested and arduous to craft and to enforce yet it is a vital role of a government of the people – for the people.

Kare speaks and consults on connective communication, collaboration, credibility and quotability â€“ key traits in this ever more connected age. This Emmy-winning former NBC and Wall Street Journal reporter was

Kare speaks and consults on connective communication, collaboration, credibility and quotability â€“ key traits in this ever more connected age. This Emmy-winning former NBC and Wall Street Journal reporter was the Obama campaign's Team Collaboration Director. â€¢ Voted one of Top 5 speakers on Communication: http://speaking.com/top5/ â€¢ See how much others have accomplished in consulting with Kare http://www.sayitbetter.com/coaching.php - or bring her to speak http://www.sayitbetter.com/meeting_planners.php â€¢ Two of her blogs are featured on Alltopâ€™s Collaboration page: http://collaboration.alltop.com/ http://www.movingfrommetowe.com http://howwepartner.com/ http://sayitbetter.typepad.com/say_it_better http://www.linkedin.com/in/kareanderson http://twitter.com/KareAnderson

Things I share: Method by which others can profitably partner Scull Tall ladder