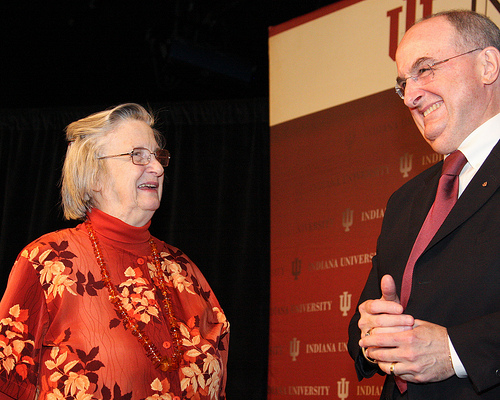 The biggest roadblock standing in the way of many people’s recognition of the importance of a sharing society came tumbling down when Indiana University professor Elinor Ostrom won the Nobel Prize for Economics. She accepts the award today in Stockholm, the first woman ever to win the prize.

Over many decades, Ostrom has documented how various communities manage common resources—grazing lands, forests, irrigation waters, fisheries—equitably and sustainably over the long term. The Nobel Committee’s recognition of her work effectively debunks popular theories about the Tragedy of the Commons, which hold that private property is the only effective method to prevent finite resources from being ruined or depleted.

Awarding the world’s most prestigious economics prize to a scholar who champions cooperative behavior greatly boosts the legitimacy of the commons, and sharing in general, as a framework for solving our social and environmental problems. Ostrom’s work also challenges the current economic orthodoxy that there are few, if any, alternatives to privatization and markets in generating wealth and human well being.

The Tragedy of the Commons refers to a scenario in which commonly held land is inevitably degraded because everyone in a community is allowed to graze livestock there. This parable was popularized by wildlife biologist Garrett Hardin in the late 1960s, and was embraced as a principle by the emerging environmental movement. But Ostrom’s research refutes this abstract concept with the real life experience from places like Nepal, Kenya, Switzerland and Guatemala.

“When local users of a forest have a long-term perspective, they are more likely to monitor each other’s use of the land, developing rules for behavior,” she cites as an example. “It is an area that standard market theory does not touch.”

Garrett Hardin himself later revised his own view, noting that what he described was actually the Tragedy of the Unmanaged Commons.

Conservatives used the Tragedy of the Commons to argue for property rights, and that efficiency was achieved as people were thrown off the commons…What Ostrom has demonstrated is the existence of social control mechanisms that regulate the use of the commons without having to resort to property rights.

The Nobel Committee’s choice of Ostrom is significant considering that many winners of the prize since it was initiated in 1968 have been zealous advocates of unrestricted markets, such as Milton Friedman, whose selection helped fuel the rise of market theory as the be-all, end-all of economics since the 1980s.

Policies based upon this narrow worldview sparked the rise of corporate power and the diminishment of government’s role in protecting the commons. While right-wing thinkers scoffed at the possibility of resources being shared in a way that maintains the common good, arguing that private property is the only practical strategy to prevent this tragedy, Ostrom’s scholarship shows otherwise.

“What we have ignored is what citizens can do and the importance of real involvement of the people involved,” she explains. A classic example of this is an acequia, a centuries-old tradition of a cooperative irrigation in New Mexico and Colorado where the small flow of water available for agriculture is allocated by the community as a whole through a democratic process.

Ostrom is the first woman to be awarded the economics prize, which some observers say helps explain her emphasis on the role of people’s relationships in our economic arrangements rather than the focus on individualized market choices expounded by many male winners of the Nobel.

Equally noteworthy is the fact that Ostrom was not trained as an economist, but as a political scientist—a factor that may be even more useful in explaining her outside-the-box approach to economics. Yale economist Robert Schiller, quoted in the New York Times, welcomed the merging of the two fields: “Economics has become too isolated and stuck on the view that markets are efficient and self-regulating. It has derailed our thinking.”

Elinor Ostrom has always been explicit in recognizing the importance of the commons—she helped found the International Association for the Study of the Commons, also based at Indiana University—and her selection as a Nobel Laureate marks an early milestone in the emergence of a commons-based society. Her works shows that our social, environmental and personal advancement depends on the vitality of the commons.

For a challenging African perspective on Ostrom's Nobel, see this essay by Korir Sing’Oei.

A different version of this essay was originally published at On the Commons, a network of citizens and organizations exploring new ways to achieve social justice, environmental harmony and democratic participation at all levels of society.