Tiny house villages throughout the U.S. are expanding despite a pandemic-led recession and zoning challenges for owners.

“People look at this phenomenon, and I think part of what’s driving the media frenzy with it is it looks ridiculous. ‘Why would anybody do that?’ Then there’s a second thought that says, ‘oh no, what’s really ridiculous is living in my 2,500 square foot house that I have to work 50 hours a week to support, and I don’t really have a life.’ That’s what’s ridiculous,“ says Gerry Brown, of Wishbone Tiny Homes, in the documentary Living Tiny Legally, Part I.

Advocates for the homeless and tiny house enthusiasts agree that downsizing is the best option for the times. Their reasons vary, including autonomy of space, less demand for resources and emission of greenhouse gases, and flexibility. Another factor is cost. Supporters say living tiny does not require choosing between living “in the now,” owning a home, and paying their bills. Others might add that creativity is a positive factor in that many who choose to inhabit tiny houses also design and build them to meet their needs, desires, and aesthetics. Now collected in villages, tiny homes also have the advantage of access to a community where people can engage, interact, and help each other, similar to a traditional neighborhood.

“The idea of building the tiny house village actually came from the residents because they had been living among each other as a community, a family. They’d gotten to know each other, and they didn’t want to lose that. But they wanted to have their own places,” says Jaycie Osterberg, Executive Director of Quixote Communities, a group that creates housing solutions and supportive services for people who are currently or at risk for becoming homeless.

“Currently, we’re building a 35-home village for veterans and have learned many lessons. In this village, there will be more ADA (American Disabilities Act) units to serve a lot more veterans with disabilities,” Osterberg said.

The village setup has been so successful that organizations currently offering tiny home villages are being sought after internationally by others who want to emulate their model. 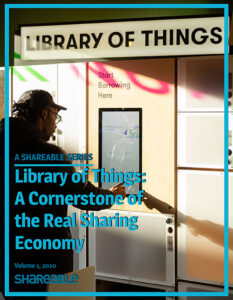 Free ebook from Shareable.net:
“Library of Things: A Cornerstone of the Real Sharing Economy”
A special series covering the past, present, and future of libraries of things.

A solution for shelter-in-place needs in a pandemic

People who are homeless face many challenges in addition to a lack of shelter. Many move around constantly in search of places to clean themselves, rest and find food. Because they lack shelter, they must carry all of their possessions with them. With this transitory life comes solitude, lack of community, and often a sense of hopelessness.

The COVID-19 pandemic increases their burdens. Many of the public and commercial spaces they once relied on for hygiene and other purposes are no longer easily accessible, even as many of these public spaces ease from being closed to reopening with limitations, such as reduced hours of operation.

Tiny houses are ideal for pandemic housing because they are separate. In traditional shelters, people sleep a few inches from each other, so the city of Seattle immediately recognized this and asked us to build more units.

“Tiny houses are ideal for pandemic housing because they are separate. In traditional shelters, people sleep a few inches from each other, so the city of Seattle immediately recognized this and asked us to build more units,” says Aaron Long, a representative from the Low Income Housing Institute.

Long said the demand for tiny house villages was growing because homeless people “really appreciate the virtues of the tiny house” in a pandemic. “They can lock their doors and safely store their belongings in one place,” he said.

Long and other advocates for homeless crisis alleviation say tiny home villages are quickly expanding. “We started the program four years ago with one village and in those four years we’re up to twelve villages and 350 units,” Long said.

Other groups, including Second Wind Cottages and Square One Villages in Oregon, are also in growth spurts.

Some of these tiny home villages offer emergency micro-shelters or sleeping quarters along with a community building that has communal bathrooms, showers, kitchen facilities, and a common area. Others offer permanent or longer-term housing solutions. Many of the programs are shedding the barriers to housing and allowing residents to stay as long as there is a need.

Some advocates believe the village setting empowers residents who run their villages similar to homeowners’ associations, ensuring the upkeep of individual and communal spaces.

Community support was a huge asset in the early days of the pandemic and mandated quarantines.

“COVID-19 put a big squelch on peoples’ hope. A lot of guys lost jobs that they worked really hard to obtain, and their visitation with their kids was cut off because of their shelter-at-home (order),” Sorensen said. “Just because of their fragile state, there were a lot of mental health issues and some of the guys slipped back into self-medicating to full-on addition. That was really hard to watch and not be able to do anything about it. But it wasn’t all negative.” Being unable to travel outside of their village means Second Wind residents engaged more in community-building activities such as gardening and tending chickens. Their attention diverted from things they could not do or control to things they could accomplish to support themselves and their neighbors.

There is one other indirect benefit of the tiny house village.  According to Square One Villages Community Relations Manager Amanda Dellinger, these villages are cheaper to develop and construct than traditional affordable housing, which has strict rules for construction.

Dellinger said an organization could wrack up costs of $250,000 per studio apartment unit due to the various requirements and expenses beyond the construction. In a tiny home village, the cost is about $90,000 per unit site.

“And you get so much more. Each unit is unique, (and they) have their own kitchens and bathrooms,” she said.

Square One Villages currently have three sites. Two villages offer permanent housing and a third offers emergency sleeping cabins or micro-shelters. All of the villages have communal spaces and facilities.

An option for off-the-grid living

Before tiny home villages became a homelessness salve, Americans who wanted an alternative to large homes, and the skyrocketing cost of living joined the tiny house movement. Though some sought the additional freedoms of living solitary lifestyles outside of traditional neighborhoods, growing segments of the U.S. population, including seniors and millennials, are electing to live tiny in community settings based on their interests, wants, and needs.

Dellinger, who has multiple sclerosis, said she and her spouse went tiny because it was the best choice to fit their lifestyle and needs at the time.

“For me, it was health-related. I have a future of a predictable disability. I have been significantly disabled and unable to work or even walk or drive. I wanted to figure out how to be a provider for my family. But if something was to happen, I didn’t want to be at risk of losing all of that just because I couldn’t pay for a mortgage. So, we decided to build a tiny house.”

“My spouse designed it and knew how to build it, so we did that together. Labor costs were about two-thirds the cost of building it, so we were able to build a high-end tiny house that was specific for our needs and wants. That was the original reason, and we kind of treated it as a stepping-stone to something bigger. We can keep and rent out the tiny house for additional income,” Dellinger said.

According to the article 14 Livable Tiny House Communities published in thespruce.com, these communities vary in their offerings. Some are former RV or trailer parks, located in picturesque settings, that allow tiny home dwellers to move their homes in and out at will. Others are located permanently in pocket communities, which are tiny homes surrounding a common area and situated near or within residential settings.

No matter the village design, people tended to locate their tiny homes in areas of like-minded individuals, such as nature-lovers. Millennials have shown a great interest in tiny homes, with 63 percent saying they would consider a tiny home according to CNN. Retirees are another group electing to downsize. A thetinylife.com survey found that nearly 30 percent of tiny home residents are between 51 and 70.

“The biggest challenge to living in a tiny house is figuring out where to put it due to zoning. Typically, the minimum size of a house in the United States is 1,000 square feet,” Andrew Morrison of Tiny House Build Oregon said in the documentary.

Tiny homes on average can be anywhere from 100 to 400 square feet, according to ipropertymanagement.com. Some of the tiny homes used by housing organizations can be 88 square feet or less.

Despite the growing demand, tiny home villages often face zoning and coding issues, which can vary from state to state and even city to city. Zoning dictates where homes can be placed, and housing codes stipulate construction requirements. Proponents predict these challenges will cede as more consumers advocate for more flexible ordinances, and states like Colorado, Maine, Michigan, Nebraska, Nevada, North Carolina, South Dakota, and Texas make moves to loosen restrictions. Ipropertymanagement.com list these states as the “friendliest toward tiny homes, many creating special laws or setting aside land specifically for tiny homes and tiny home communities.”