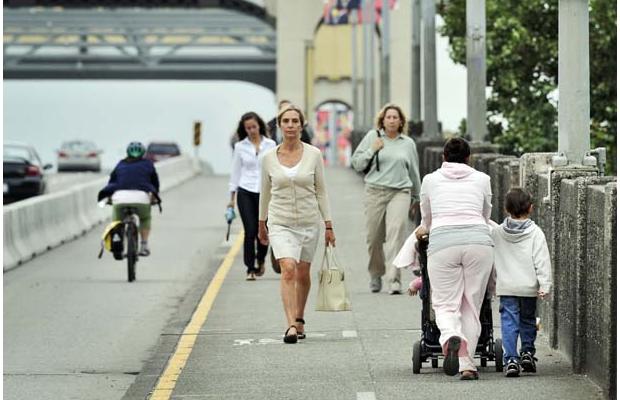 From the blog Openalex:

The six lane Burrard Bridge is one of Vancouver's most highly used, and connects the downtown core with nearby residential and commercial neighbourhoods. In July, the $1.3 million trial project converted one of the six lanes into a dedicated two-way bike lane separated from traffic by a concrete barrier (see photo). The results of a new report on the project speak for themselves:

Not surprisingly, residents support continuing the bike lane trial by a margin of 2 to 1.

The success of the bike lanes emerges from a political mess: The design and implementation of the trial lane has been a political football since 2005. It was staunchly opposed by the Downtown Vancouver Business Improvement Association, on the grounds that it would discourage people from travelling into the downtown. It also caused general hand wringing among the public over fears that it would cause gridlock. Some versions of the bike lane project were budgeted at as high as $63million adding further to taxpayers concerns.

In the end, the city's much simpler and cheaper lane conversion has been a real success. None of the fears of gridlock have materialized, and ridership is way up. It's the kind of virtuous circle between increased ridership and better infrastructure that we've also seen in other bridge cities, like Portland for example. And as the Vancouver example shows, you don't have to spend oodles of cash to make bridges and streets cycle-safe.